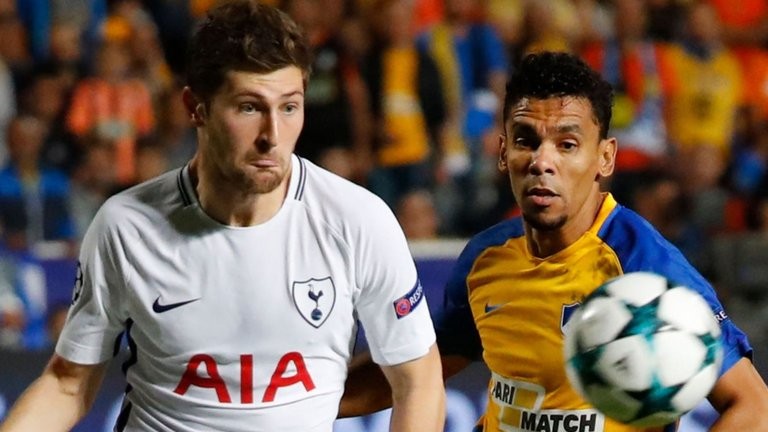 Harry Kane’s first Champions League hat-trick made it two wins from two group games for Tottenham with a 3-0 victory at APOEL Nicosia.

The in-form striker gave Spurs a first-half lead against the run of play when he latched on to Toby Alderweireld’s through-ball and finished coolly, after the hosts had earlier hit the crossbar.

Hugo Lloris was forced into two good saves after the interval as APOEL continued to threaten, but deadly Kane finished off another swift breakaway when he was set up by Moussa Sissoko.

And the England striker took his current Champions League tally to five in two games, and nine goals in all competitions this season, when he headed home Kieran Trippier’s cross from the right to net a perfect hat-trick.

Man of the match: Harry Kane

Boss Mauricio Pochettino insisted there was “no excuse” for Tottenham not to win the game, despite arriving in Cyprus with seven first-team players missing through injury or suspension – and the scoreline belied how uncomfortable it was for them for large periods.

Egged on by a raucous band of ultras in the home end, Igor de Camargo rattled the goal-frame on 19 minutes after being put through by Stithies Aloneftis, before Carlao headed wide at the far post completely unmarked.

Spurs – playing Ben Davies in a back-three with right-back Kieran Trippier filling in at left wing-back – were forced to hit APOEL on the break for their goal, similarly to how they beat Borussia Dortmund a fortnight ago, and fortunately they had Kane to side-foot home the opener.

Heung-Min Son, who also scored in that 3-1 win at Wembley, went close from a tight angle as Spurs went in search of a second immediately after the interval, but APOEL twice went nearly hit an equaliser and Lloris did well to beat away Roland Sallai’s clever volley and a fierce shot from left-winger Efstathios Aloneftis.

Spurs made three changes to the team that beat West Ham – Kieran Trippier, Harry Winks and Son Heung-min all came in. Christian Eriksen was ill while Dele Alli and Jan Vertonghen were suspended.

Pochettino removed Serge Aurier as the hour-mark approached, switching Trippier to his more familiar right-back and bringing on Fernando Llorente, who combined well with Sissoko to set up Spurs’ and Kane’s second.

Sissoko picked out Kane unmarked in the penalty box and he found the far corner, and then Trippier beat his man on the far side four minutes later to cross for Kane and his first hat-trick in Europe’s elite competition.

There was even time for Pochettino to hand Anthony Georgiou – of Cypriot descent and one of two academy stars on the bench for Spurs – his debut for a club looking very comfortable in the Champions League surroundings.

“We are growing in the last few seasons, being competitive. We need to show ourselves we can compete at that level, against these types of teams, against Real Madrid in the Champions League. But I think we will be very motivated to play against the best team in the world.”

Man of the match – Harry Kane

Who else? Kane was once again in ruthless form and showed he is there for Spurs even when they are not playing well. His positioning was most on point tonight, especially for his third and second goals, where he found space for his team-mates to pick him out. The definition of clinical.

Strong travellers Spurs continue on the road this Saturday lunchtime against newly promoted Huddersfield Town – a game which is live on Sky Sports Premier League.