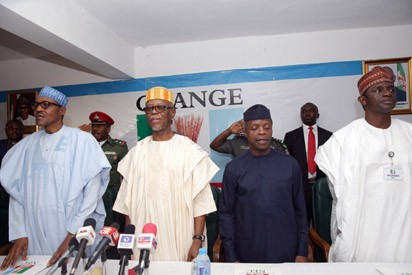 By Johnbosco Agbakwuru
ABUJA – STATES Chairmen of the All Progressives Congress, APC, yesterday evening met with the Acting President, Prof. Yemi Osinbajo in a closed-door meeting at the Presidential Villa, Abuja and expressed anxiety over the health of President Muhammadu Buhari and the economy of the country.

Speaking to State House Correspondents after the meeting, leader of the delegation and Chairman Lagos chapter of the APC, Mr Henry Ajomale re-echoed the vision of the APC government, which he said was tailored towards improving the lives of Nigerian citizens.

Ajomale said they were grateful to God for the improvement in the health of President Buhari even as the party chairmen expressed concern on the economy of the nation and steps being taken to address the challenges.

He, however, commended the Buhari-led administration for addressing the problem of corruption squarely, adding that the problem must stop.

He said “we feel that we should come and pay a courtesy call on the acting President, a member of our party, so we discussed at length the situation in the country and our anxiety on the health of the President.

“And that we are grateful that God in his infinite mercy has made him whole which is very critical and important for the vision that we have for this country as APC government.”

Giving details of the cloosed-door meeting with the Acting President, he said, “he was able to brief us on the situation in the country, the economy and the solution and antidotes to some of the mirage of problems that is facing this country.

“We are very impressed with the situation, we will go back to our states and let the people know that the government has very good intention and we should be part and parcel of the government in order to ensure that the poor people of this country are getting better deal.”