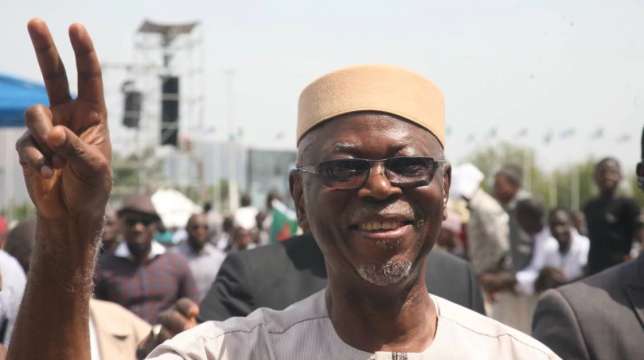 APC This is why governing party extended tenure of embattled chairman

Embattled chairman of the APC John Oyegun had his tenure extended this week. Here’s why he was handed a 12-month lifeline.

It was a decision that sent a few tongues wagging, given that APC leader Asiwaju Bola Ahmed Tinubu, has twice written critical letters calling on Oyegun to leave as Chairman of the APC.

Oyegun’s tenure as Chairman of the APC should have ended on June 30. But he was handed another 12 months to hang on to his job this week.

“All affected officers will continue in acting capacity for another period of 12 months after the expiration of their current term”, a statement from APC spokesperson, Bolaji Abdullahi announced.

Not rocking the boat

Sources within the APC told Pulse on conditions of anonymity that Oyegun and other members of the NWC were handed a lifeline because the party didn’t want to head into the 2019 general elections a divided house.

“Holding elective congresses at this time would have led to some acrimony and division within our party before the 2019 general elections. We thought it was best to leave the team as it is and hold elective congresses immediately after the 2019 contest”, one top ranking APC official disclosed to Pulse.

A communique issued by the APC after the NEC meeting, corroborated our source’s position.

“In view of the short period between the time available for the proposed party congresses and INEC published time-table for conduct of party primaries and general elections, the forum resolved that the tenure of the present officers of the party at all levels be extended by another year to avert challenges in the party”, the communique had read in parts.

Pulse was told that Oyegun has lost support within the party and that he’s only being tolerated by APC godfathers.

His tenure has led to disaffection within the governing party, sources revealed.

“Our Chairman’s tenure has led to crises within our party in Kaduna, Kano, Kogi and elsewhere. What kind of Chairman sleeps with both eyes closed when his party is imploding right before him?”, one APC chieftain screamed rhetorically over the phone.

A Premium Times story reveals that Oyegun was kept on because the APC was keen on avoiding the mistakes that befell the PDP after its 2013 convention.

“Our party learnt from the mistakes of the PDP. That their (2013) convention eventually led to the collapse of the party and loss of the 2015 election and the problem they are still having,” a presidential aide told Premium Times.

The online newspaper added that “the PDP convention referred to is that held in August 2013. Based on the shenanigans of that convention, ex-Vice President Atiku Abubakar led seven serving state governors to walk out of the party.

“Many of the aggrieved eventually formed the ‘New PDP’ which eventually became part of the APC. The fall out of that convention is believed to have been a major factor that caused the party to lose the 2015 general elections”.

Tom Steyer who is worth an estimated $1.6 billion Drops Out Of 2020 Presidential Race