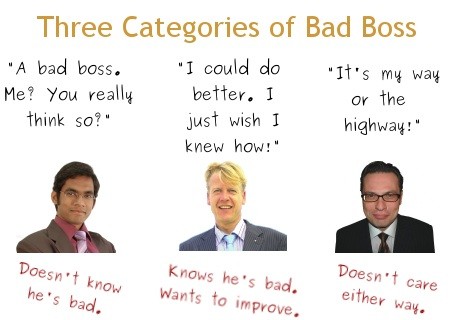 Humans (and even monkeys, as this hilarious experiment shows) have an innate sense of fairness. He want good acts to be rewarded and bad one punished in proportion to their impact. Of course, that’s not always how the world works, but that’s the hope anyway.

Unfortunately, a new study from consultants Life Meets Works, dashes that hope when it comes to toxic bosses. Not only do they not meet swift punishment, the results show, but their bullying behavior is actually often rewarded with increased employee engagement.

But don’t get too outraged, the effects wear off, and in the long run, bad bosses do get their comeuppance. Sadly, though not before some short-sighted companies are convinced that hiring jerks pays dividends.

When Life Meets Work recently surveyed 1,000 college-educated U.S. employees they found a whopping 56 percent of respondents described their boss as toxic. How is it possible that so many jerks have thrived and risen in their companies? Maybe it’s because employees of managers who display more toxic behaviors like belittling employees actually work harder than well treated workers.

That’s infuriating, but it’s pretty much what the survey revealed. “People who work for highly toxic bosses–managers with more than a handful of bullying or undermining behaviors–tend to be more engaged in their work than other employees,” reports the WSJ’s Vanessa Fuhrmans. The study “also found such employees stayed an average of two years longer in their jobs than other workers.”

Reasons not to be too annoyed by these findings

While these results definitely show more high performing people than you might imagine soldier on working for jerks, there are a few reasons the findings aren’t quite annoying as they first appear.

The first is methodological. Because less engaged workers have less motivation to persevere when faced with a toxic boss, many probably quit when they discover their manager is a jerk. That means sorting occurs, where less driven workers quickly find their way to mellow managers and the highly engaged stick it out in bullying work environments, skewing survey results. It isn’t mostly that toxic bosses drive engagement. It’s that the highly engaged that stick it out with toxic bosses.

It’s also true, that both manager and employee may be driven to such behavior by a sense of mission or pressure from higher up. “Employees at companies with highly competitive, win-or-die cultures were more likely to report working for a toxic boss, according to the study,” Fuhrman notes.

What goes around comes around… eventually.

But that’s not the only reason not to despair. While bad behavior produces results (or at least doesn’t dent them) in the short-term, it’s still a terrible idea if you want to build a culture where people thrive in the longer term. According to Kenneth Matos, head of research at Life Meets Work, toxic bosses eventually do cause higher turnover and increased risk of employee burnout and lawsuits. It just takes awhile.

If you’re looking for a counterweight to the Work Meets Life evidence that bullying can pay off, Furham suggests a 2006 study which “estimates abusive supervision costs companies $23.8 billion annually.”

So while it’s terrible that bosses’ bad behavior can get results just long enough for some misguided companies to be convinced that nastiness actually pays, in the longer run both those businesses and the toxic managers they tolerate will probably pay for their foolishness.

There is some fairness in the universe in other words. It just takes an annoyingly long time to manifest.