Andrew Furey, N.L.’s rookie premier, has his mandate. Now what? 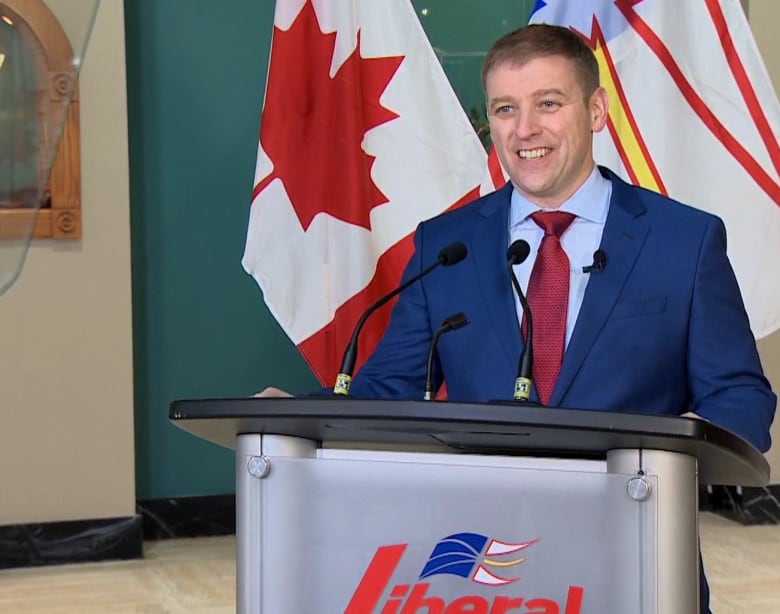 It took an extra six weeks, but Andrew Furey finally has what he wanted to have by Valentine’s Day: a mandate of his own to get on with governing Newfoundland and Labrador.

Furey’s Liberals emerged on top Saturday with the release of results in an election that had to shift to mail-in voting when an explosive outbreak of the B117 virus variant happened just before the scheduled election day.

The Liberals won 22 of the 40 seats in the House of Assembly, just one seat more than what Furey needed for a majority. He may have had hopes for more, given that, in the leadup to the election call in January, public polls had the Liberals with a comfortable lead.

Furey, who won a Liberal leadership race last August, indicated Saturday that he is forging ahead with plans to restructure how the province is governed.

“The time for boldness is now, Newfoundland and Labrador,” Furey said at the close of his victory speech, delivered in a downtown St. John’s hotel room.

Furey did not elaborate much on what kind of “boldness” he has in store. In a subsequent interview with CBC News, Furey went to some campaign stump favourites, including “bold, aggressive targets on immigration and reimagining our population, to try to reverse the demographic crisis that we’re facing.”

Furey also took at swing at a boondoggle commissioned by the former Tory government. “We need to fix Muskrat Falls so that we can deal with the structural issues from the economy in the medium term,” he said, referring to the still uncompleted hydroelectric megaproject in Labrador that is billions of dollars over budget and years behind schedule.

What the Liberal premier — a 45-year-old orthopedic surgeon who put his medical career on hold last year with a long-expected jump into politics — will do with his mandate is not yet clear; he’s given mixed signals of what the public can expect.

On the one hand, Furey — who has said he has lost sleep worrying about managing N.L.’s staggering and ever-growing net debt, pegged at $16.4 billion — launched two high-profile initiatives aimed at restructuring. An economic team headed by St. John’s-born executive Moya Greene, a former head of Canada Post and the Royal Mail who was known for tough decision-making, was organized in September. Furey also launched what’s called a Health Accord for Newfoundland and Labrador, which is currently hearing from residents on dealing with health spending that its leaders say has become unsustainable.

On the other hand, Furey has also repeatedly tried to assure people that his agenda does not involve sweeping cuts. “Now is not the time to take jobs out of the economy,” he said during a televised leaders’ debate in early February.

Those deferrals, though, may have been a strategy in an election campaign that went sideways because of the COVID-19 pandemic, with in-person voting cancelled on the very eve of the scheduled election.

In the end, Furey came out of the 10-week campaign with just three seats more than he had going in.

In an interview Saturday, he said the public can be brought around should difficult measures have to be put before them.

“I think that these are decisions that collectively we all have to own,” Furey said.

“And I think the public are intelligent, the electorate are intelligent. They understand the issues we face.… What we need to do is make sure that the general public understands the decisions, why we’re making them.”

WATCH | Andrew Furey tells Peter Cowan why he believes the electorate will trust his decision-making:

While avoiding specifics of what he has in store, Furey indicated the coming term will be memorable.

“This is uncharted territory,” he said.

Furey has multiple issues to deal with. They include:

The pandemic. The outbreak that threw the election campaign into disarray in February has been contained. N.L. dropped to one active case on Thursday, and on Saturday announced no new cases for the eighth time in nine days. The government’s goal now is to ramp up vaccinations, and meet its target of at least one dose for every adult who wants one by Canada Day.

The economy: Even before the pandemic, N.L. was facing significant economic problems. Many of them are internal: public debt has been steadily mounting, year over year, and successive reports from the Auditor-General’s Office have warned of a government spending beyond its means.

Federal lobbying: Much of N.L.’s hurtling debt is connected to Muskrat Falls, the hydroelectric megaproject it admits is a boondoggle. With strong federal Liberal connections, Furey — the son of Speaker George Furey — has been lobbying Prime Minister Justin Trudeau for help. It’s also worth noting that despite its financial crisis, N.L. does not qualify for equalization and remains, weirdly and on paper at least, a so-called “have” province.

The Greene report: Dismissed by labour groups and progressives before its interim report has been completed, the recommendations of Moya Greene’s team of voluntary advisors will doubtless have great weight. Furey has promised to take the economic recovery team’s advice to the public for comment before government does anything with them.

Health Accord: Furey tapped two veteran players in health-care management — Elizabeth Davis, a retired administrator, and Dr. Pat Parfrey, a nephrologist who has been sharply critical of wasteful health spending and unnecessary tests and procedures — to oversee a review of the health-care system.

Offshore oil: Despite a growing decarbonization movement and a push for economic diversification, N.L. remains dependent on the royalties and jobs that flow from the offshore oil industry. Since taking office last August, Furey has supported using taxpayer money as incentives to keep oil companies active. His government is hoping the dormant Terra Nova field will go back into production, and that drilling will resume again at Hibernia. Activity offshore was dramatically scaled back in the early weeks of the pandemic.

Share
Facebook
Twitter
WhatsApp
Pinterest
Linkedin
ReddIt
Email
Print
Tumblr
Telegram
Mix
VK
Digg
LINE
Viber
Naver
Previous articleSmall towns dig deep during pandemic to save their rinks and halls, one cheesecake at a time
Next articleWant to know how much added sugar is in your favourite foods? Canadian companies don’t have to tell you