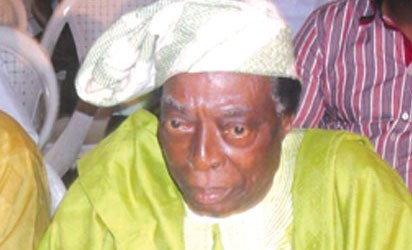 Ibadan—A renown custodian of Yoruba culture and foremost playwright, Chief Adebayo Faleti is dead. He died at the  age of 86.

According to his son, Adeniyi Faleti, the poet and veteran actor, who translated the National Anthem into Yoruba died in his residence yesterday.

Adebayo Faleti: passes on at 86

As if he had premonition of his death, the deceased who featured in films like Saworo Ide, Bashorun Gaa, Efunsetan Aniwura and many more prayed to God some moments before he died that God should send someone to continue his sojourn in this life.

This was disclosed by Adeniyi. He said, “After the morning devotion, I helped him to the bathroom where he said he wanted God to send someone else to come and complete his work because he had done all he could do. He also said that he wanted to go home”

After saying this, Adeniyi said; “I noticed that he was not breathing again. We took him to the University College Hospital, Ibadan where he was confirmed dead.”

Adebayo Faleti, a veteran broadcaster, before his death, had always been at the forefront of those Yoruba elders who warned that Yoruba language should not be allowed to go into extinction.

Also speaking on the demise of his father,  Mr Ayoola Faleti said; “In his usual attitude, he called me three days ago and we discussed like father and son.

”When I received a call this morning from my brother, I rushed home to see him but I did not see him. He died before I could reach home.”

His wife of 50 years, Moteniola also described late Faleti as a man of virtues.

She said; “I knew him as a loving husband and I will always remember how well he catered for the family. He prepared the children for a good future by ensuring that they got good education,” said Moteniola.

In his own words, Gbemi, another son of the deceased said, “As an actor, he was a celebrated artiste, as an administrator, he headed the Broadcasting Corporation of Oyo State, BCOS and Oyo State office of Mass Mobilisation for Self Reliance, Social Justice, and Economic Recovery. He fitted into every good role that a father and a friend could play.’’

He was a zealous promoter of culture — Amosun

The governor described the deceased, who died at the age of 86, as a zealous  promoter of culture, noting that his works will always be cherished.

Amosun also stated that the poet and writer will be remembered for his contributions to the birth and growth of the Broadcast Industry, particularly the Television.

Also, Oyo State Governor, Senator Abiola Ajimobi, has condoled with the family, friends and associates of Chief Adebayo Faleti, over the death of the ace broadcaster, writer, poet and actor.

In a statement by the governor’s Special Adviser on Communication and Strategy, Mr. Yomi Layinka, he described the passing away of Chief Faleti as shocking and devastating.

Ajimobi, who said he received the news of Pa Faleti’s death with shock and disbelief, described the deceased as a repository of Yoruba culture and tradition, and a good ambassador of the state.

“Even though Baba Faleti died at the ripe age of 86, his passing away is very unfortunate, disheartening and sad. Part of the things that endeared him to my heart was his simple lifestyle, his dislike for material wealth and commitment to the progress of the Yoruba race,” Ajimobi said.