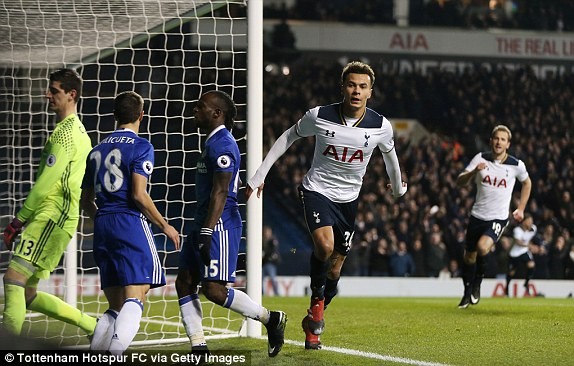 Marcos Alonso scored a late winner for Chelsea as Tottenham’s season at Wembley start with a disappointing defeat.

Spurs did not lose a Premier League game at home during 2016-17 – but this defeat means they have now lost seven of their past 10 games at what will be their temporary home while awaiting completion of a new stadium at White Hart Lane.

Spurs responded strongly with Harry Kane hitting the post and it looked like they had earned at least a point when substitute Michy Batshuayi header Christian Eriksen’s free-kick into his own net with eight minutes left, Chelsea cursing as Willian had also hit the upright.

However, the Blues showed trademark strength of character to secure a morale-boosting win after 88 minutes when Alonso scored his second, with Spurs keeper Hugo Lloris guilty of a serious error in allowing the shot to go underneath his body.

Chelsea back in business

Chelsea went to Wembley supposedly in the depths of crisis following the opening-day defeat by Burnley at Stamford Bridge and with the saga over Diego Costa’s future being played out as a distracting backdrop.

But there was little evidence of crisis here as the Blues dropped back into the old routine – hard-as-nails defensive resilience and that ruthless winners’ streak that allowed them to snatch victory late on.

And even manager Conte looked like he meant business once again, swapping the Chelsea tracksuit worn against Burnley for his trademark dark suit at Wembley.

Chelsea rode their luck at times to stand firm in the face of a Spurs siege either side of half-time – but they retained ambition and it was a defender in Alonso who raced into the area to score the winner.

Tiemoue Bakayoko had an impressive first start in midfield and the mental strength and character the champions possess was shown by their response to Batshuayi’s freakish own goal equaliser.

Chelsea’s delight at the final whistle was obvious and understandable, Conte punching the air in front of the away section and shouting “come on” as the supporters chanted his name in celebration.

This was just the result and performance Conte and Chelsea needed – and the triumph was even sweeter because it was inflicted on Spurs at their temporary new home, delivering a blow to a side who will regard themselves as rivals for the title this season.

Tottenham’s move to Wembley for one season saw the famous old stadium draped in the club’s livery and mottoes – as well as a drummer using a microphone to send out a booming beat at strategic intervals.

It was all designed to make it feel like home and an attempt to continue their superb White Hart Lane form of last season, when they won 17 and drew two of their 19 league games.

But this match had the kind of ending they did not experience on home turf during 2016-17.

It was, however, a familiar feeling for them at Wembley – but talk of a curse is surely premature.

Spurs played well for large portions of this game only to be thwarted by a poor final ball and the blue wall of defiance presented by Chelsea.

It was not the start Tottenham wanted at their temporary home, but there is enough quality in Mauricio Pochettino’s side to swiftly put this setback behind them.

Morata was given his first Chelsea start since his club record £60m move from Real Madrid, presumably with confidence high after scoring as a substitute during the home defeat by Burnley.

This was a much tougher day for the 24-year-old Spain international as he understandably takes time to adjust to his new surroundings, ending in his substitution after 78 minutes.

Morata looked off the pace, was often outmuscled and was guilty of a glaring miss inside the first five minutes that could have made life a lot easier for Chelsea.

It seemed more difficult to miss the target than score as he arrived unmarked on to Cesar Azpilicueta’s perfect cross just eight yards out. He slumped in despair as he headed the chance wide.

Morata had few more opportunities to show his undoubted class and looked out on his feet when he was replaced by Batshuayi.

The striker’s undoubted pedigree will surface but this was all part of his Premier League education. He will have better days than this one.

Tottenham are back at Wembley next Sunday when they play Burnley (kick-off 16:00 BST), while Chelsea host Everton on the same day (kick-off 13:30 BST).

Leading from the front – the stats