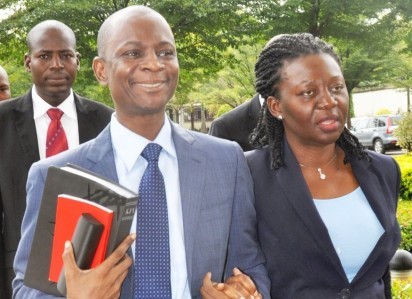 Alleged $40m contract scam: Court strikes out 7 charges against Jonathan’s cousin
ABUJA—-The Federal High Court sitting in Abuja, on Thursday, struck out seven out of the nine-count criminal charge the Economic and Financial Crimes Commission, EFCC, preferred against former President Goodluck Jonathan’s cousin, Mr. Robert Azibaola. Robert Azibaola and his wife The court, in a ruling that was delivered by Justice Nnamdi Dimgba, also discharged and acquitted Aziboala’s wife, Stella, of all allegations EFCC levelled against her in the charge marked FHC/ABJ/CR/ 113/2016. Justice Dimgba said he was satisfied that going by the proof of evidence the anti-graft agency adduced before the court, the 1st defendant, Aziboala and his firm, One Plus Holdings Nigeria Limited, had no case to answer with respect to the seven-count charge that was struck out. However, the court, ordered Jonathan’s cousin and his firm to open their defence to counts two and three of the charge which borders on allegation that they received $40million contract from the detained former National Security Adviser, NSA, Sambo Dasuki, retd. EFCC had in the two charges that were sustained by the court, alleged that Aziboala had while being the Managing Director/Chief Executive Officer (MD/CEO) and a signatory to the Zenith Bank account of One Plus Holdings Nig Ltd, on or about September 8, 2014, took possession and converted the $39, 999, 958 out of the $40million, and transferred same to the domiciliary account of One Plus Holdings Nig Ltd with Zenith Bank Plc Account No. 5070365750. The agency told the court that the 40m was released from the account the Office of the National Security Adviser operated with the Central Bank of Nigeria, upon a transfer mandate Ref. No. 128/S.5LX/139, on the guise that it was meant for the supply of Tactical Communication Kits for Special Forces. It maintained that the defendants reasonably ought to have known that the fund was part of the proceeds of an unlawful activity by Dasuki, adding that they had by their action, committed an offence contrary to section 15(2), (d) of the Money Laundering (Prohibition) Act, 2011 as amended in 2012 and punishable under section 15(3) and (4) of the same Act. Aziboala’s wife was identified as a Director and signatory to the Zenith Bank account of the 3rd defendant (One Plus Holdings Nigeria Ltd), where the money was lodged from the CBN. EFCC closed its case against the defendants after it called a total of 10 witnesses that testified before the court. Thereafter, the defendants, through their lawyer, Chief Chris Uche, SAN, filed a no-case-submission, insisting that EFCC failed to establish a prima-facie case capable of warranting the trial court to compel them to open their defence to the allegation. It was their contention that EFCC was unable to by way of credibile evidence, establish a nexus between them and the alleged $40m contract scam. Besides, they argued that both oral and documentary evidence the EFCC adduced against them were manifestly unreliable that no reasonable court or tribunal could rely on it to make a conviction. In his ruling, Justice Dimgba held that the defendants’ no-case-submission succeeded in part. The court noted that whereas most of the charges bordered on offence of conspiracy, it said that some of the key persons that were directly involved in the alleged transaction, were not charged. For instance, the court held that the former NSA, Dasuki, and one Mr. Amobi Ovum, a Zenith Bank staff that was involved in the fund transfer, was not joined as defendants in the matter. According to the Judge, “I therefore do not see any evidence of conspiracy to launder any sum of $40m with Amobi Ovum who is not a defendant in the charge. If at all any conspiracy to launder funds existed, such a conspiracy would have been between the former NSA Sambo Dasuki, who in any event is not charged as a defendant in the charge. “And if there is no credible third party, I hold that the offence of conspiracy must fail entirely given that it is legally impossible for the 1st and 2nd defendants to be found guilty of conspiracy on their own. “In the eyes of the law, they are regarded as one and therefore legally disabled from committing conspiracy. All this considered, I hold that there is no prima facie case made to warrant the defendants putting up a defence in count one. I therefore, accordingly acquit and discharge the 1st and 2nds defendants of this count”. “I hold that the no-case-submission in count one, four, five, six, seven, eight and nine succeeded, and hereby discharge and acquit all the defendants in relation to these counts. “However, I dismiss the no-case-submission of the 1st and 3rd defendants in relation to count two and three, and hereby direct the 1st and 3rd defendants to open their defence. “The 2nd defendant (Mrs. Azibola) is hereby discharged and acquitted of all the nine counts in the charge”, Justice Dimgba held. Justice Dimgba had earlier granted Aziboala and his wife bail to the tune of N1billion. They were directed to deposit N500million each, as well as to produce two sureties in the like sum. The court held that the sureties must be owners of landed properties in either Maitama or Asokoro Ditrsicts of Abuja and must produce evidence that they paid income tax for the past three years. Azibaola was docked after he had spent 80 days in custody of the EFCC. Charges against the defendants attract punishment varying from 7 to 14 years imprisonment upon conviction.
Share
Facebook
Twitter
WhatsApp
Pinterest
Linkedin
ReddIt
Email
Print
Tumblr
Telegram
Mix
VK
Digg
LINE
Viber
Naver
Previous articleUpdate: The 11 soldiers killed by suspected bandits in Kaduna laid to rest
Next articleBuhari in Lagos: Documentary photographer narrates how a man was beaten because he drove past closed road