During the winter months, Maritimers have been hitting the snow and spending hours creating intricate, otherworldly patterns that are sometimes gone in a blink of an eye.

“I love the geometry and the amazing things with those mysterious crop circles that we see around the world,” said John Panopoulos.

Panopoulos and his wife, Charmaigne Letourneau, moved to Cap-Pelé from Ontario. Panopoulos wanted a new environment for sculpting and Letourneau was originally from Campbellton.

In February, Panopoulos glanced outside his window and was struck by how much the snow-covered lakefront by their house looked like a canvas.

“I thought, let’s embrace this opportunity with this lake, with snow, and let’s do something out there,” said Panopoulos.

“And so I thought of pulling those two elements of crop circles and I pulled out my compass sets and I started drawing out on paper.”

The design was 30 metres in diameter and took the couple around two hours to complete.

Panopoulos said there needs to be a starting point. “We have a rope … [and] one person stands in the middle and the other person walks around.”

Letourneau is an accountant and so the two came at the project with different styles.

“Being an accountant, one plus one equals two, and it’s pretty much, like, go with the flow. And for me to let go and follow along … I’m, like, ‘No, no, we’re going to do it perfect,'” said Letourneau while laughing.

The couple, who did snowshoe art for the first time, said it was a great form of cardio and posed a challenge to people to try their hand at it.

In Riverview, snowshoe art has also made its mark after the town invited two Nova Scotia artists to complete a design for the Riverview Winter Carnival.

But this isn’t their first time at the snowshoe art rodeo. They have done designs like this about five times before, but this one posed a different challenge. 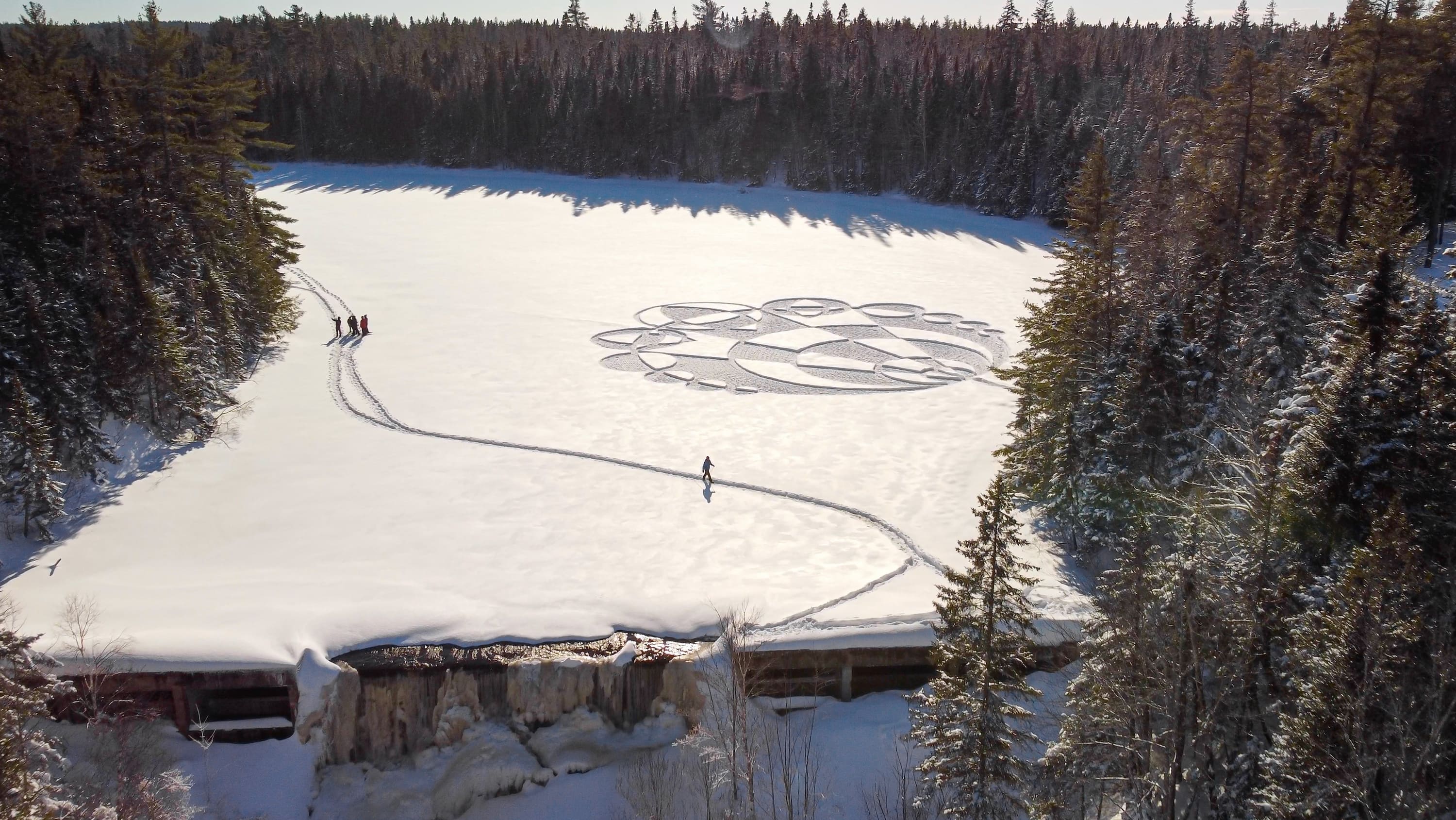 “What we did not expect was there to be a 56-centimetre snowfall a day or so before and that caused some issues where the weight of the snow pushed down the ice,” said Robinson. “This caused water to seep above the ice, even though we had 16 inches of ice.”

The plan was to do the design with their snow boots for a crisper image.

But upon seeing the slush they were faced with, Benoit came up with the idea to switch to snowshoes.

“It takes a fair bit of patience because you can’t really undo a mistake, so you have to be pretty precise,” said Benoit.

“So it’s a lot of stopping, a lot of pre-planning so you get it done right.”

As a child, Robinson was always fascinated with geometric art.

“There’s a doodle that I used to do as a kid where it’s a checkerboard, but rather than straight lines, it’s squiggly lines and I would make that in Microsoft Paint and I would fill it in black and white.” said Robinson.

He added that, just for the fun of it, he attempted to stamp out that design, which ended up being 50 metres.

“I posted that on my Facebook and that took off ridiculously.”

Gone before you know it

“One day they could be there and we had a little bit of wind overnight and it could be very Etch-A-Sketch,” said Robinson who noted that was part of the charm.

“The very low impact, where they’re not taking up a lot…. They’re not doing much harm to the environment. That’s the beauty of it.”

The day after they had created their design, Panopoulos and Letourneau discovered that a snowmobile had gone through it.

“It’s a process and not a matter of how long it lasts,” said Panopoulos.