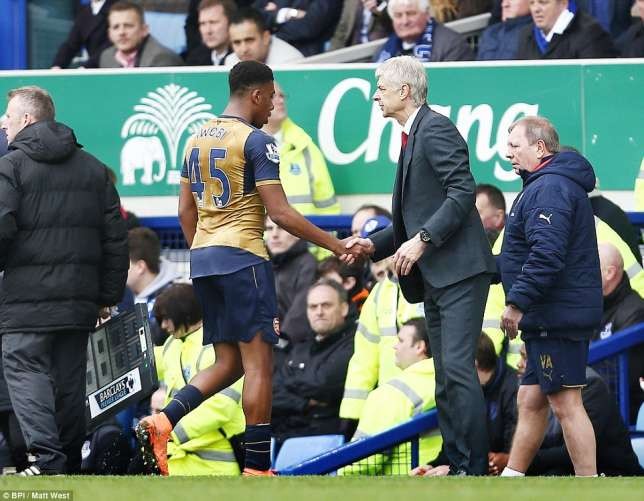 Iwobi and his teammates have taken to social media to pay tribute to the manager.

Arsenal star Alex Iwobi and his teammates were left in tears as Arsene Wenger on Friday, April 20 announced to the squad that he will be stepping down at the end of the season.

Wenger with a statement on Arsenal’s website announced that he will be quitting the club at the end of the season.

Before the news became public, the manager gathered his players at the club’s London Colney training base to inform them of his decision.

“I have bad news for you – I’m leaving the club at the end of the season,” Wenger is said to have told his players.

According to Daily Mail, Iwobi and his fellow Arsenal players were left in tears after the manager’s speech.

The players, the report said, were stunned and quiet before captain Per Mertesacker stood up to address them.

Iwobi and his teammates who are still soaking up the news have taken to social media to pay tribute to the manager.

“For Everything You’ve Done For Arsenal Football Club, For Trusting Me As A Teenager, For Giving Me The Opportunity To Express Myself And Grow Both As A Footballer And As A Person, I Will Forever Be Grateful To You Boss. Thank You So Much,” Iwobi said on Instagram.

“To the man who gave me my chance as a 16-year-old, and showed unbelievable faith and commitment towards me. Always a gentleman, like a father through tough times in my career. He always believed in me when most people didn’t. Thank you for everything boss! It’s down to us now,” Jack Wilshere also took to social media to say.

“Personally a very sad day. I am forever in debt to this man. The person who had faith in me and gave me a platform to progress. Thank you for all the memories and trophies boss,” Hector Bellerin also said.

Former Arsenal player Cesc Fabregas whom Wenger signed as a teenager from Barcelona also paid tribute to him.

“Wow. I never expected that but it shows the great dignity and class of the man. I will never forget his guidance and support, his tutelage and mentorship,” Fabregas said.

“He had faith in me from day one and I owe him a lot, he was like a father figure to me who always pushed me to be the best. Arsene, you deserve all the respect and happiness in the world. Class act.”