Alec Baldwin can’t quit Trump. Neither can the news media. 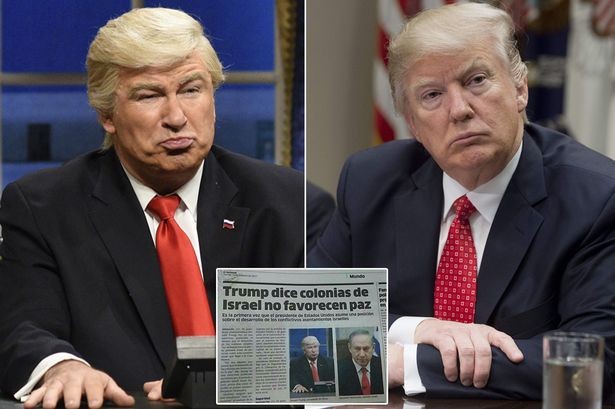 The comedian returned as Trump on Thursday’s episode of “Weekend Update,” the “Saturday Night Live” spinoff on a limited-time run this summer. Baldwin hadn’t donned Don’s wig since SNL’s season finale three months ago, and there was no guarantee that he ever would again.

In April, the Atlantic chronicled the unglamorous side of Baldwin’s celebrated impression and his ambivalence about the role. Here’s an excerpt in which reporter Chris Jones described midweek rehearsals:

In 20 minutes, Baldwin has inhabited seven different characters. Of all the parts, Trump is his least favorite to play. “It’s not easy,” he says. “It’s not easy.”

Playing Trump is physically demanding — watching footage of his longer performances, Baldwin can sometimes see his mouth begin to droop, his Trump face requiring a combination of contractions that can be hard to sustain — but it’s a psychic challenge, too. Jokes are supposed to provide an escape, for the listener and the teller. Instead Baldwin lives in a state of constant reminder. His country is so far from his hopes for it, and now people won’t stop asking this liberal New Yorker to portray the primary vessel of his disappointments. Baldwin sometimes wishes that Trump would appear next to him on SNL, the way Tony Bennett did years ago, reclaiming his own voice and in the process maybe helping Baldwin do the same.

“If he was smart, he’d show up this week,” Baldwin says. “It would probably be over. He could end it. If he showed up.”

Trump will not show up, and nobody has any idea how this might end, least of all Baldwin. (He doesn’t even know whether he’ll continue to play Trump after this season concludes in May.)

Well, the season is over and Baldwin is still playing Trump. He can’t resist.

From Alec Baldwin as Donald Trump to Kate McKinnon as everyone else, here’s a look back at the highest-rated season of “Saturday Night Live” in nearly a quarter-century. (Nicki DeMarco/The Washington Post)

Neither can the news media — not that quitting the president of the United States is an option, but Trump has a way of attracting an inordinate amount of coverage. Bloomberg reported this week that evening cable newscasts have boosted their ratings this year by focusing heavily on Trump; meanwhile, over-the-air competitors at NBC, CBS and ABC have suffered by devoting airtime to a wider range of stories.

TV audiences can’t get enough news coverage of Donald Trump. Reporting on pretty much anything else is ratings poison.

Cable networks have figured out how to successfully capitalize on Trump’s outrageous antics, but viewership for NBC, ABC and CBS newscasts have declined as much as 14 percent this year among coveted younger viewers. Broadcasters’ strategy of offering a wider range of stories — from human interest to health and local crime — is falling flat with some viewers who have migrated to cable news for coverage of White House drama.

Though he complains about critical coverage (and also about Baldwin), Trump likes to be the center of attention, whether the attention is positive or not. Journalist David Von Drehle described a telling moment on Trump’s campaign plane, last March, when he observed the then-candidate’s TV viewing habits.

“When he flips to Fox News,” Von Drehle wrote in Time magazine, “Trump notices a caption that sums up everything: ‘News outlets around the world are covering Trump.’ Turning to me on the sofa, he gestures at the screen and remarks with satisfaction, ‘The key word is covering.’”

Trump also said this to Von Drehle: “I go on one of these shows and the ratings double. They triple. And that gives you power. It’s not the polls. It’s the ratings.”

Trump doesn’t “go on” the shows very often, these days. The highly accessible candidate has become a rather distant president. But he maintains an alluring quality that make him irresistible to Alec Baldwin and Anderson Cooper, alike.