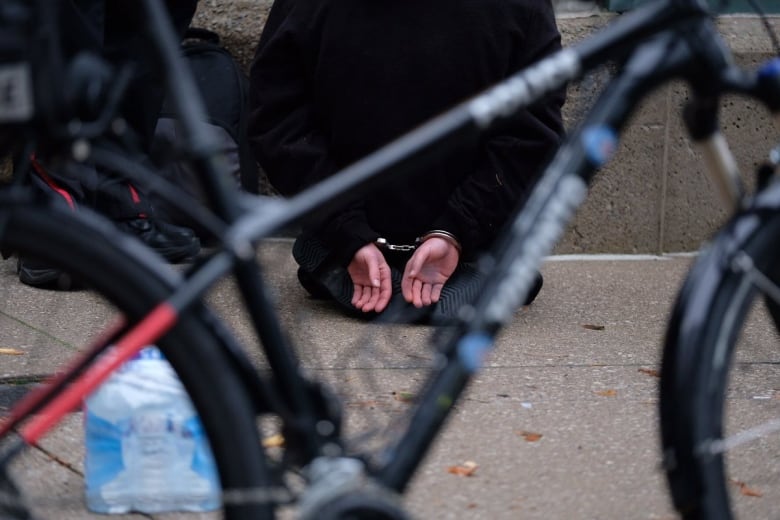 One person has been arrested amid a protest in Toronto against an appearance, at a debate, by one of the masterminds of U.S. President Donald Trump’s election.

Police confirmed one arrest before 6 p.m. ET, but a spokesperson could not offer details.

A CBC photographer captured one person, seated and facing a wall in handcuffs. 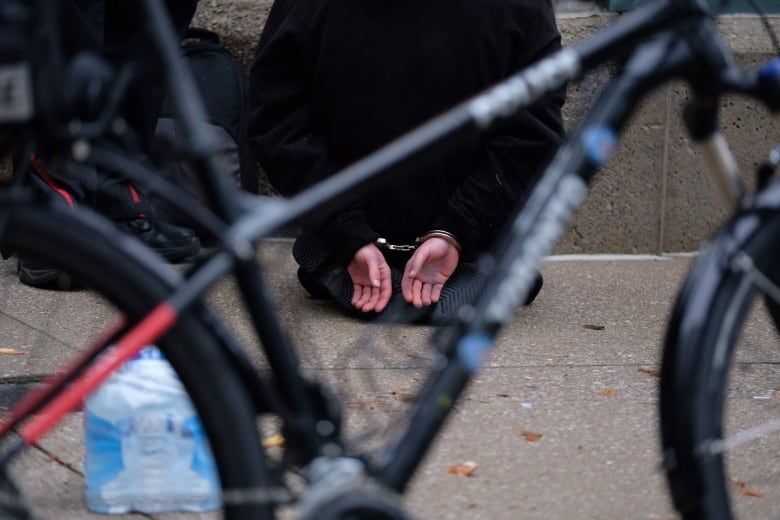 A protester is seen in handcuffs outside Roy Thomson Hall, ahead of the debate between Bannon and David Frum on the role of populism in politics. (Evan Mitsui/CBC)

Hundreds of people gathered outside Roy Thomson Hall in downtown Toronto on Friday to voice their opposition to the debate’s participants. Former Trump strategist Steve Bannon will appear on stage with The Atlantic’s senior editor, David Frum, at a Munk Debate, arguing whether populism is the future of Western politics. ​Bannon will argue for the proposition; Frum against.

While the Munk Debates are a popular for the city’s political movers and shakers, the announcement of Bannon’s participation back in September sparked an immediate backlash.

A petition opposing Bannon’s participation garnered hundreds of signatures, while earlier this week, the federal NDP called for the debate’s outright cancellation.

Hours before the debate, which is scheduled to begin at 6:45 p.m. ET at Roy Thomson Hall, a consortium of groups led by No One Is Illegal, released a petition opposing the event that had some 5,000 signatures.

The group also organized a protest outside the venue that began at 5 p.m. The first protester arrived before 4:30 p.m., holding a sign saying “just say no to hate,” with a photo of Bannon beside an equal sign next to a photo of a garbage can.

Bannon has long been a lightning rod for criticism of the alt-right movement, which he gave a home to in the form of his far-right news and opinion website, Breitbart. He was also Trump’s chief strategist until he left the White House last year.

But Frum’s presence is also not without controversy over his role as a strategist and speechwriter for former U.S. president George W. Bush.

Rudyard Griffiths, the chair of the Munk Debates, has defended the event, saying it’s “providing a public service by allowing their ideas to be vigorously contested and letting the public draw their own conclusions from the debate.”

“Civil and substantive public debate of the big issues of our time helps all of us better understand the challenges we face as a society and what, if anything, can be done to resolve them,” he said.