Alberta’s new chief medical officer must be independent, not sidelined 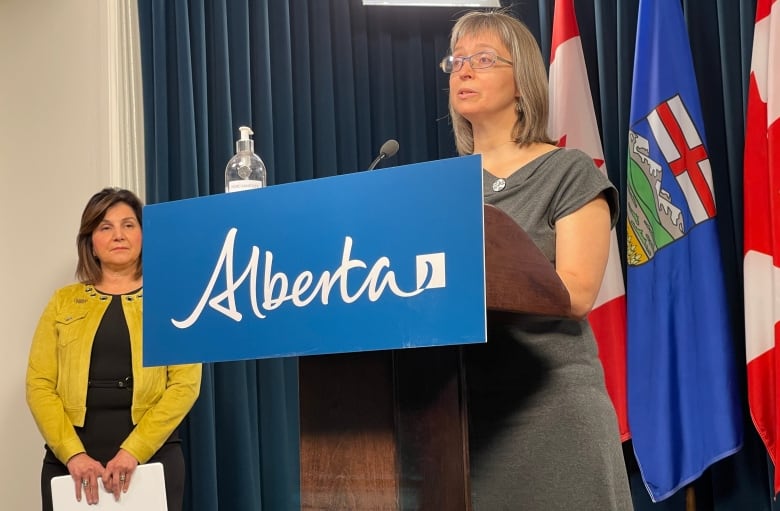 This column is an opinion by Lorian Hardcastle and Ubaka Ogbogu, law professors who specialize in health law. For more information about CBC’s Opinion section, please see the FAQ.

Governments across the country are starting to think about lessons learned from COVID-19 and how to prepare for a future pandemic. They must sort out the roles that elected officials, provincial chief medical officers of health (CMOH) and other entities ought to play in managing public health emergencies.

A court ruling last month on masking in schools underlines the importance of this conversation, as does Premier Danielle Smith’s stated intention to explore legal mechanisms to prevent mask mandates and ensure the government has prime authority over public health matters.

As respiratory virus rates and school absenteeism skyrocket, debates are playing out in Alberta and across Canada about the legal authority of CMOHs and entities like schools and whether they should re-institute public health measures in light of the fact that, like Alberta, provincial governments seem largely unwilling to act.

Some argue that the CMOH should be merely an adviser, leaving officials who are accountable to voters to command public health decision-making. Others call for legal protections to ensure the CMOH can operate independent from political interference.

We support the latter, given the manner in which Alberta’s response to COVID-19 was hindered by the Kenney government’s politicization of public health. Although politicians certainly still have a role to play in public health decision-making, an independent CMOH is necessary to help the public separate science from politics.

One way to safeguard CMOH independence is to grant them the independent legal authority to issue public health orders. Under this model, if elected officials disagreed with the CMOH, their only recourse would be to override the CMOH with legislation.

Even if a CMOH does not have legal authority to make public health decisions, their independence could be protected by establishing a duty to provide information directly to the public on health-related matters. An inquiry into Ontario’s COVID disaster in long-term care highlighted the importance of such a duty.

That report was critical of the CMOH’s failure to speak publicly when the government failed to follow scientific evidence, stating that “the public has the right to know the advice given on such an important matter, directly from their chief medical officer.”

Under either model of independence, it would be clear when the government’s policy fails to reflect the scientific evidence. This would make the public better positioned to hold elected officials accountable and to take additional precautions as needed to protect themselves and their families.

Both models avoid the problematic situation where a CMOH stands at a podium and appears to endorse a public health measure but it is not clear whether that measure is based on their view of the science or whether it reflects political tradeoffs made by cabinet.

Throughout the pandemic, former premier Jason Kenney’s cabinet alternated between taking credit for public health decisions when they perceived things to be going well, and blaming the CMOH, as they did when their Open for Summer strategy flopped.

However, cabinet has always been clear that final authority for public health orders rests with them and represents their balancing of “lives and livelihoods.”

Perhaps in an effort to distance herself from cabinet’s policies, Alberta’s now-former CMOH Dr. Deena Hinshaw repeatedly insisted she is only an adviser, despite the fact that public health orders bore her signature and referred to her statutory authority.

In October, an Alberta judge weighed in on this debate and clarified that under provincial law, authority to issue public health orders rests with the CMOH. Because Dr. Hinshaw had improperly delegated her power to make public health decisions to cabinet, the judge found that her February order suspending masking in schools was “unreasonable.”

Public health is broad and multi-faceted and cannot be the sole purview of public health officials or provincial governments. Instead, public bodies such as schools, post-secondaries and municipalities must have a collaborative relationship with the CMOH, and the ability to implement their own policies to supplement CMOH orders.

This will ensure that public health measures are responsive to the local context.

It is also consistent with the obligation these institutions have to protect those they serve. They can also play an important role in filling the gap when the government refuses to act to protect the public for political reasons.

Cabinet members created confusion with mixed messaging on whether public bodies such as schools can enact policies that are more restrictive than provincial public health orders.

In August 2021, Education Minister Adriana LaGrange said “throughout the pandemic, we have trusted local school authorities to make decisions that work for their schools and their school communities.”

But the following February, she said “school boards will not be empowered” to require masking.

The government took a similar approach with municipalities by first supporting COVID-19 bylaws targeted to meet local needs and later legislating to prohibit them.

In the recent Alberta case, the judge provided welcome clarification that schools do, in fact, have the power to implement policies to ensure student and staff safety. The government can only limit that authority through regulations and not through sternly worded letters.

Premier Smith has not embraced the decision’s confirmation of the CMOH’s legal authority, or the legitimacy of schools and other entities enacting their own public health policies. Instead, she stated she will not permit mask mandates in schools, and will ensure her government alone makes public health decisions for schools.

The government has now replaced Hinshaw with Dr. Mark Joffe. Given Smith’s comments on centralizing legal authority for public health in cabinet, he may soon see his powers eroded by amendments to the Public Health Act.

If Smith freezes the CMOH and other entities out of public health decision-making, Albertans risk facing the next COVID wave or disease outbreak without much in the way of scientific leadership.