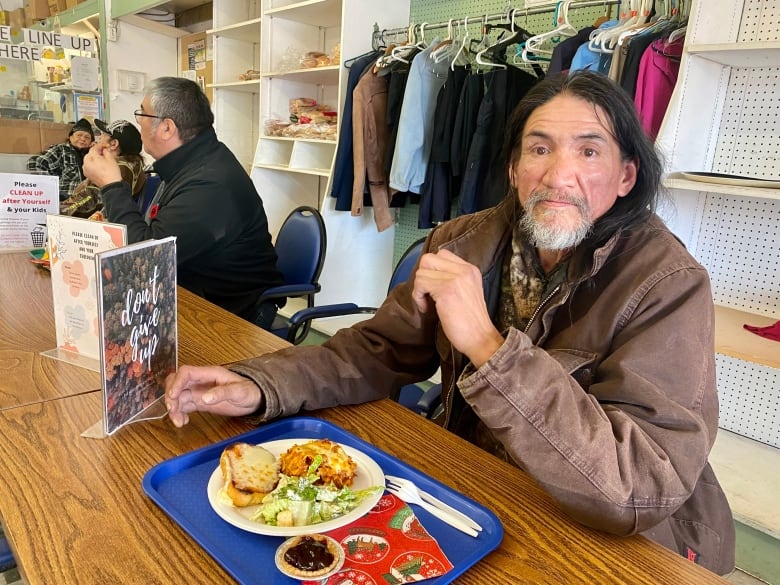 Instead, the 54-year-old homeless man wanders the streets of Meadow Lake, Sask., 300 kilometres northwest of Saskatoon, in order to keep himself and others from freezing to death.

During his nightly patrols, McPherson checks on about two dozen people huddled in different locations, such as alleys, derelict buildings or vehicles.

“I walk around, make sure they stay awake and they stay alive,” said McPherson.

Like many small cities, Meadow Lake, with a population of 5,300, doesn’t have a homeless shelter or any place for vulnerable people to warm up after 4 p.m. or on weekends.

Saskatchewan’s harsh winter is just beginning, but the coroner’s service is already investigating the deaths of two men found frozen — one in Saskatoon and another in Prince Albert.

‘There’s nowhere in the world for them’

On a recent patrol, McPherson bought soup from 7-Eleven for a young woman who was shivering without a jacket.

Then, in a back alley, he banged on an old car half-covered in snow.

“Anybody here?” he shouted. No one ended up being inside, but there were scraps of food, bedsheets and a black garbage bag filled with clothes.

“It’s like there’s nowhere in the world for them and nobody wants them,” McPherson said. “They’re really happy when they see me come along, and I’m really happy to find them [alive], because it doesn’t take long to freeze out here.”

There’s only so much that McPherson can do to help, though. Often, he will wake someone up, get them moving, give them warm clothing or take them to 7-Eleven or an ATM lobby for a brief respite from the cold.

He feels compelled to watch over others in the same way a “guardian angel” watched over him last winter. He nearly froze to death in a –38 C snowstorm.

“I lost direction and time… so I sat down for a minute, and thought I’d rest for a minute. I fell asleep,” McPherson said. “I had a guardian angel that night. She came and kicked me in the foot.” 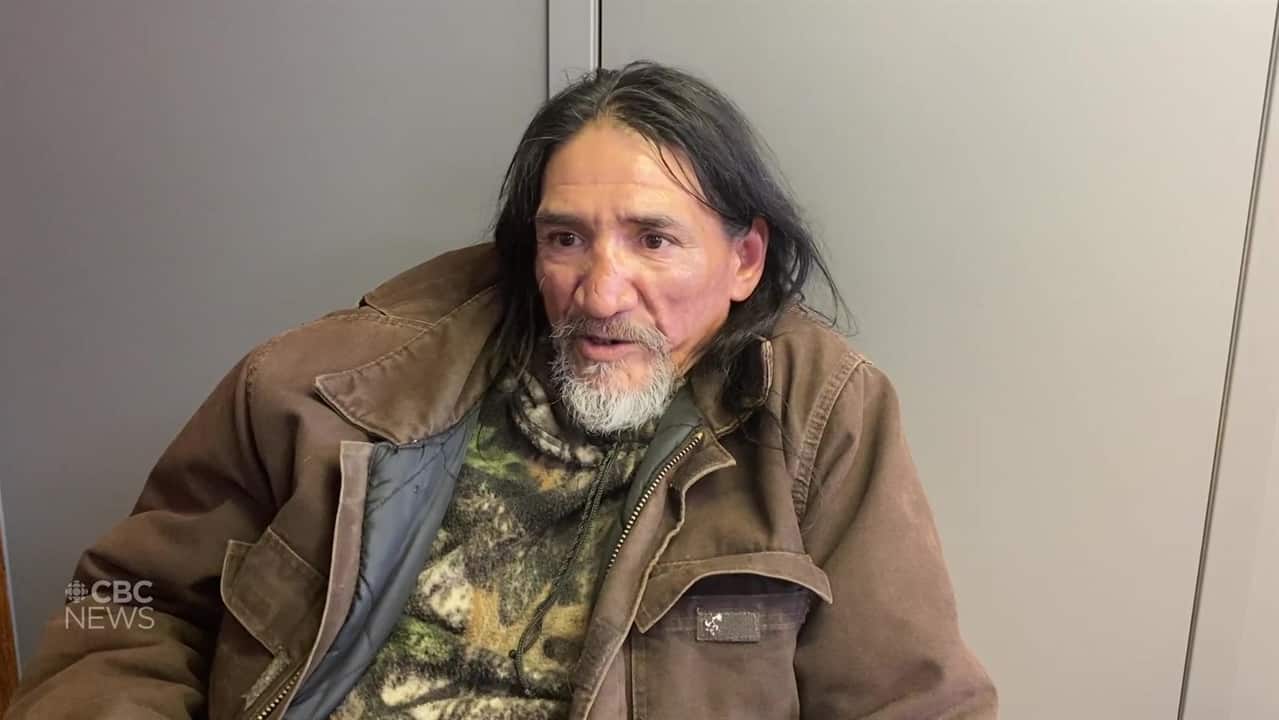 Homeless man describes the night he almost froze to death on streets of Sask. city

Ernest McPherson says his near-death experience last winter makes him too afraid to fall asleep outside on a cold night.

“In communities without shelters, or if an emergency shelter is full or doesn’t meet a person’s needs, residents will be connected to a hotel or different shelter that offers the support they require,” said the government press release.

At the Door of Hope soup kitchen in Meadow Lake, Natanis Bundschuh doesn’t consider hotel room tokens to be a real solution.

Bundschuh is the executive director of a non-profit Christian organization called Meadow Lake Outreach Ministries. It serves about 100 hot lunches a day, distributes free clothing and stocks a food bank, but its doors are only open from 8 a.m. to 4 p.m., Monday to Friday.

Bundschuh said she has escorted homeless people to the Social Services office, only to have them denied a hotel room — either because hotels were full or because the person had “maxed out” an undefined limit on tokens.

“I’ve often had to tell people, ‘Call the RCMP and they’ll give you a safe, warm place [in the cells]. They’ll give you a meal, they’ll make sure you’re not too cold.’ But most people don’t like that, because they feel trapped, they feel locked in. For some, it’s traumatic. Maybe they’ve been to jail.”

Bundschuh said a woman told her that McPherson pulled her out of the cold one night and thawed her out.

Volunteers who have worked with vulnerable clients at Door of Hope for decades say homelessness is growing in the northern community for many reasons, including addiction, mental illness, changing social assistance policies and the rising cost of living.

The situation is so alarming for some that a group of business people, church leaders and concerned residents formed Home Plate, a homeless coalition in Meadow Lake to lobby for funding for a shelter. But so far, it’s run into roadblocks.

“People are going to die. And it’s on us. It’s gotta be addressed,” said Bob Steeg, chairman of Home Plate. He said he’s frustrated by all the bureaucracy involved, from building codes and zoning issues to insurance and funding criteria.

“I highly doubt we’d see a shelter in six months. We’re struggling just to have a warm-up spot,” said Steeg. “Someone has to say, ‘We’re just going to do it.’ And get it done. And have people survive.”

“In my mind, turn on the heat, throw them a sleeping bag.”

The coalition is convinced that someone will die this winter if it can’t find safe shelter for about two dozen chronically homeless people in Meadow Lake.

Living in ‘an ice box’

In the short term, the coalition is seeking emergency funding to extend the Door of Hope’s drop-in hours from eight hours a day, five days a week, to 24/7. That wouldn’t create any shelter beds, but it would provide people with round-the-clock heat, supervision and security.

Beyond that, the coalition wants to procure some of the vacant social housing units and eventually secure funding to cover a building and staffing for a homeless shelter.

Ernest McPherson said the only reason no one died last winter is that a group of homeless people, including him, illegally occupied a vacant downtown hotel.

The Métis man, who dumpster-dives to earn money from recycling, recently scrounged up $300 from friends to buy a truck camper, even though he doesn’t have a truck.

“It’s an ice box in there right now,” he said, standing in the doorway of the camper, which is propped up on a stand.

While the camper provides a roof over his head, McPherson still needs to find money to fuel a propane heater.

He said he will continue to sneak naps at the soup kitchen and on a friend’s couch. He won’t stop wandering the streets at night, though.

“Until there’s a shelter, I’ll be here, patrolling every night.”