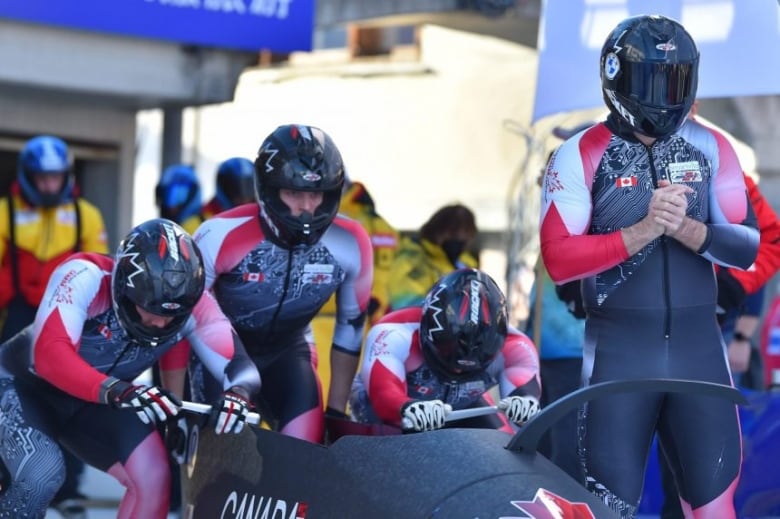 After he gave up the gridiron for the ice, Shaquille Murray-Lawrence says his dream to compete for Canada at this year’s Beijing Olympics was thwarted by systemic discrimination within Bobsleigh Canada Skeleton.

Despite posting overall better performance results, Murray-Lawrence says his spot was given to a “walk-on” athlete who never even competed with his eventual Olympic teammates until the Beijing Games.

Since joining the team in 2020, Murray-Lawrence has raced for Canada in the four-man bobsleigh event 11 times. As the brakeman and the last man to hop in the sled, he helped push his team to seven gold and two silvers while competing in North America and Europe.

He also helped Canada qualify a third four-man sled for the Beijing Olympics — a rare feat in the sport in which powerhouse Germany was the only other country to do so.

His main rival was Jay Dearborn, another CFL player. A snapshot of how the two stack up against each other is seen in the performance records tracked by the International Bobsleigh and Skeleton Federation (IBSF).

Dearborn competed in just five races in the past two years, and his best finish was fifth place in the four-man sled event, racing with Canada’s best pilot.

The two athletes have similar profiles — but with one glaring difference.

“When one athlete is white and one athlete is Black, you know, do we see past that? Do we say, ‘Oh, no, that’s normal.’ Or is there something deeply rooted?” asked Murray-Lawrence.

The allegations of racism are putting BCS under increased scrutiny just weeks after the sport organization was called out for its “toxic culture” in an open letter signed by 90 current and former national bobsled and skeleton athletes.

The letter stated that BCS policies had “deeply held biases, resulting in an environment that is anti-competition … and ensure in many cases that only the athletes who fit into the ‘BCS ideal’ will ever have the opportunity to compete.”

It also called for the resignation of BCS president and CEO Sarah Storey and high-performance director Chris Le Bihan.

Many of the signatories chose to remain anonymous out of fear of retribution or losing their spot on national teams.

But two other bobsledders, veterans Cynthia Appiah and Neville Wright, are breaking their silence. They tell CBC that Murray-Lawrence is just the latest example of systemic racism within the national bobsled organization.

For Appiah, racism within BCS takes the form of “microaggressions and snide remarks,” she said. She said she’s seen athletes of colour shortchanged on training, opportunities and even treatments, like physiotherapy and massage, during her more than eight years with the team.

Appiah has pushed her way to gold and bronze at elite World Cup events as a brakewoman and is currently ranked third in the world in women’s monobob, following an eighth place finish at the Beijing Olympics.

“It’s hard not to see patterns emerge, where certain people are given preferential treatment over others. And at times, those that aren’t being given opportunities tend to be athletes of colour. Black athletes,” she said.

Three-time Olympian Neville Wright, who was on the team for nearly a decade before retiring in 2018, said he’s experienced overt racism in his career, being called “garbage” and “trash” and left off teams despite good performances. A top team official once accused him of stealing a helmet after his coach told him to get a spare from the equipment shed, he said.

Looking back, Murray-Lawrence says different standards were applied to him from the moment he joined the national team.

In the fall of 2020, BCS recruiters dangled the possibility of competing at Beijing in front of him. Murray-Lawrence says coaches asked him to prove his “commitment” by quitting football.

Lured by the dream of representing Canada at the Olympics, Murray-Lawrence walked away from the CFL — even though he was also offered a contract by the Montreal Alouettes as a running back.

For more than a year, he paid for his own flights, accommodations and food during bobsled competitions. His commitment appeared to pay off: in 75 per cent of his races, Murray-Lawrence pushed his sleds to gold or silver.

When performance metrics don’t measure up

In January, while competing at an event in St. Moritz, Switzerland, Murray-Lawrence said he was told he would be evaluated against Dearborn. Up until that moment, Murray-Lawrence didn’t even know the fellow CFLer — a defensive back who had been playing with the Saskatchewan Roughriders all year — was contending for a spot.

“I compete all year. I win all year. [Dearborn] joins the program with 30 days left and just leapfrogs onto the Olympic team,” said Murray-Lawrence, noting that BCS hadn’t given him the same opportunity to juggle both football and bobsleigh.

“[Dearborn] didn’t make any sacrifices. He just showed up at the end of the year and took my job.” 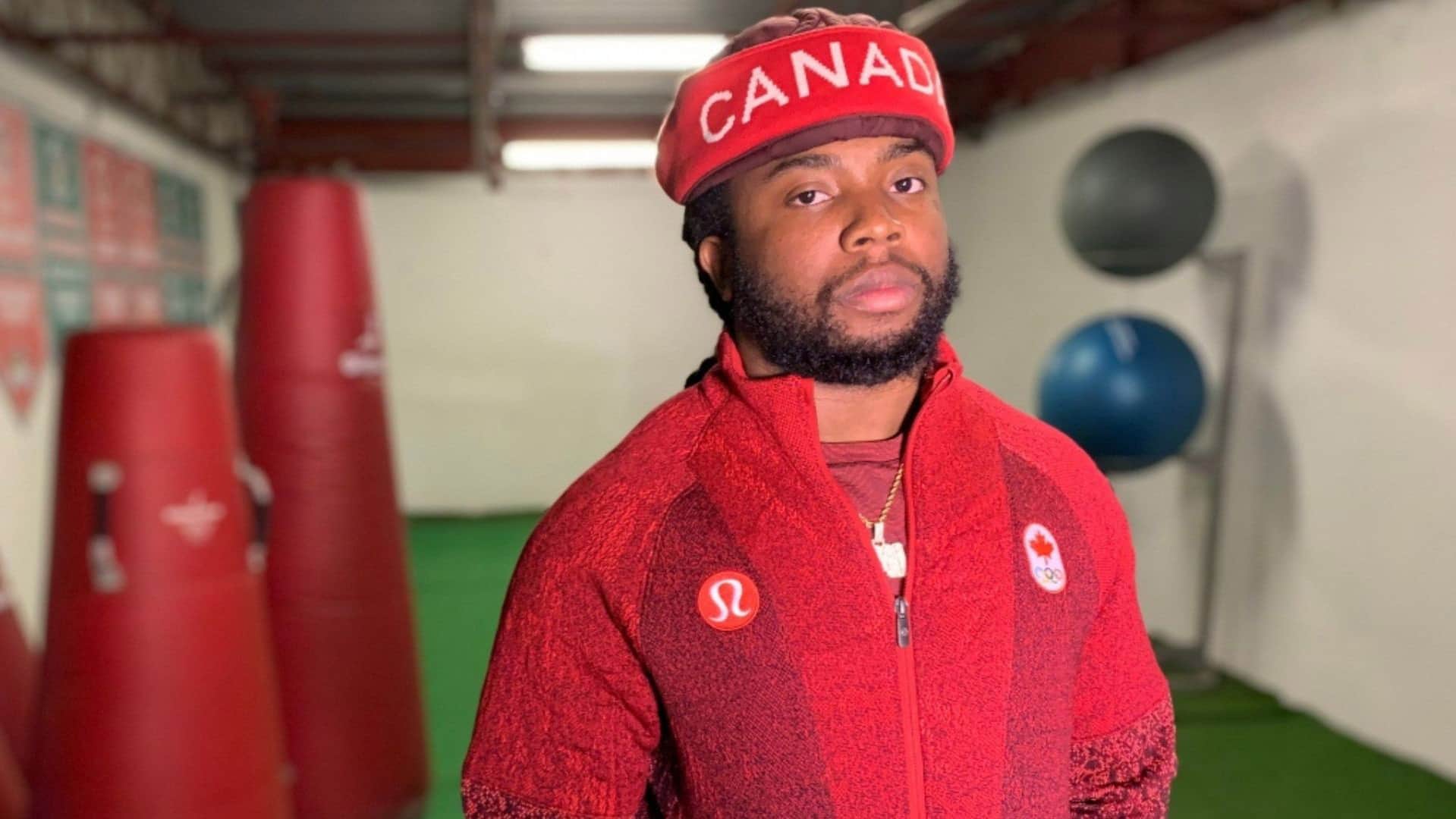 Bobsleigh athlete Shaquille Murray-Lawrence says racism during Bobsleigh Canada Skeleton’s Olympic team selection process cost him a chance to compete in Beijing, losing his position on the team to someone he out-performed. 2:30

In St. Moritz, the two brakemen went head to head in a two-man bobsleigh competition piloted by Austin Taylor. When their push times were compared, Dearborn beat Murray-Lawrence by 0.03 of a second.

Murray-Lawrence says coaches put him through four gruelling practice runs before the evaluation. He says Dearborn only had one.

Not only was fatigue a factor, but Murray-Lawrence also took issue with the qualifying format; it was the first time he had raced two-man in competition.

CBC reached out to Dearborn multiple times for comment, but did not receive a response.

Murray-Lawrence said several teammates encouraged him to complain to the Sport Dispute Resolution Centre of Canada to get his position back. But during arbitration, only one bobsledder, Chris Spring, the pilot of Canada’s Sled 2, agreed to testify.

With the Olympics around the corner, Murray-Lawrence’s three teammates on Sled 3 backed out at the last minute.

In his testimony, Spring said it didn’t make sense to change the composition of a team so close to the Olympics. When asked who was the superior brakeman, Spring acknowledged they were similar, but said: “In my opinion, Shaq has more experience with Team Austin (Sled 3), so he would be the better choice.”

CBC spoke to two other sledders who agreed that Murray-Lawrence should have been on the Olympic team.

The arbitrator ruled in favour of BCS, saying that selecting Dearborn was a “reasonable” decision. The report found that BCS “did not apply its discretionary power in an arbitrary, biased or prejudicial manner,” and instead, Dearborn’s “versatility simply edged out Murray-Lawrence.”

According to BCS, Dearborn had more experience in both two- and four-man races and the coaches wanted the option of using him in both events in Beijing.

Both men had raced in the same number of competitions on the elite World Cup circuit, but Dearborn placed higher while pushing the top-ranked Canadian four-man team.

However, IBSF stats show that in overall four-man bobsleigh experience, the scales tipped in favour of Murray-Lawrence. He raced 11 times on the larger sled, Dearborn only twice.

At the Beijing Olympics, Murray-Lawrence sat on the sidelines as an alternate and watched as Sled 3 placed 23rd — its worst finish of the season.

BCS president Storey said the team selection is a “robust process” and the decision is more complex than the rankings of each athlete.

“There are weight limits, there are combinations, there’s riding position.… It’s not just about times. There’s push, there’s speed and other aspects,” said Storey.

“It’s a tough thing to do,” she said. “Somebody is always going to be disappointed and that is the nature of high-performance sport.”

The organization says it wants to resolve the issues brought forward by its athletes in the open letter and hopes the sledders will participate in an independent, third-party mediation process it has initiated.

And the trouble at BCS is adding to the turmoil in national sport that has made its way onto the radar of the federal sport minister. Pascale St-Onge’s office has received more than 100 complaints from athletes from eight different sporting federations, ranging from bad governance to safety concerns to abuse.

Sport federations need to have more diversity in their leadership, St-Onge said, noting that organizations that rely on federal funds will be held to account for mismanagement and abuse.

But these changes come too late for Murray-Lawrence. With his Olympic dreams dashed, he’s decided to quit bobsledding.

His days now consist of honing his football skills, with the aim of getting on the roster of another CFL team. And with two years away from the sport, he’s hoping that door hasn’t closed.

Read the arbitration decision from the Sport Dispute Resolution Centre of Canada between Shaquille Murray-Lawrence and Bobsleigh Canada Skeleton: