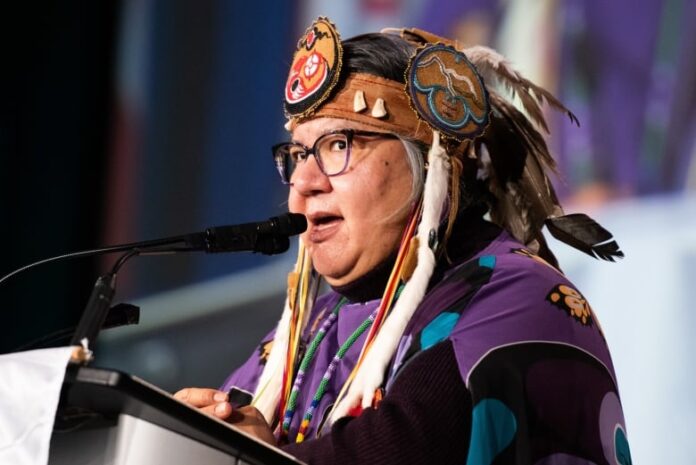 A former CEO of the Assembly of First Nations who was in charge when an AFN official allegedly received a nearly $200,000 payout was sued in 2011 by a now-defunct Indigenous health organization over her alleged offer of a “large and unwarranted” payout to an official there, according to documents obtained by CBC News.

Paulette Tremblay, a Six Nations of the Grand River member who lives in Ottawa, served as the AFN’s CEO between September 2017 and January 2020.

The National Aboriginal Health Organization (NAHO) sued her on Oct. 27, 2011, five months after she ceased to be its CEO, after its chief financial officer Jason Cheney launched a court bid to collect a $112,452 payout he claimed Tremblay offered him.

NAHO countersued Cheney and added Tremblay to the suit, claiming it withheld Cheney’s cash after the not-for-profit’s board came to believe the duo orchestrated the payment through collusion, “deceit and/or fraudulent misrepresentations” of facts.

Tremblay said she denies the accusations, although she didn’t file a defence.

“First and foremost I would like to state unequivocally that there was no wrongdoing on my part in performing my job functions at the National Aboriginal Health Organization,” she wrote in a letter to CBC News.

“Having left NAHO in July 2011, I was completely unaware of any actions of the organization related to the employee mentioned. I did not know about the lawsuit and the case was closed by the time it came to my attention, so it was not possible to provide a defence.”

In the previously unreported lawsuit, NAHO alleged Tremblay approved an amendment to Cheney’s contract and then, shortly after, terminated that contract while offering him one year’s salary as severance — all without disclosing this information to the board.

NAHO alleged Cheney prepared his own cheque, Tremblay signed it, and Cheney then applied the signature block of NAHO’s treasurer Oliver Okemow to it “without Okemow’s knowledge or consent” to obtain the cash.

The lawsuit claimed NAHO then discovered and withheld the payment, calling it “reckless, wholly unwarranted and obviously contrary to the best interests of NAHO.”

The allegations were never proven in court.

The case reached a mediated out-of-court settlement on Nov. 25, 2011, filings say. CBC News was unable to learn the settlement’s details despite asking Tremblay and making repeated attempts to contact Cheney and other parties.

The suit was dismissed without costs on April 2, 2012 with consent from all involved, including Tremblay, who signed a document agreeing to the dismissal.

NAHO closed its doors on June 30, 2012 after it learned Stephen Harper’s Conservative government had slashed its annual funding of $4.4 million.

The Tories said NAHO’s “governance challenges” contributed to the cuts.

Tremblay has had a successful career as an executive and public administrator since then. She received an Indspire award for education in 2015 and joined the AFN in 2016.

The AFN announced her upcoming departure as CEO on Dec. 4, 2019 during its annual winter gathering, where then-national chief Perry Bellegarde honoured her work in a blanket ceremony.

In the months following Tremblay’s departure, the AFN learned of an “irregularity” around a contract amendment and payout that allegedly occurred while Tremblay still worked there, according to an internal AFN briefing note dated Oct. 30, 2020.

National Chief RoseAnne Archibald has presented this briefing note or distributed it among an unknown number of AFN chiefs on at least two occasions. She showed it first to the Chiefs of Ontario, which advocates on behalf of 133 First Nations, during an in-camera session at their February 2021 gathering, documents confirm.

The briefing note later leaked to the media, along with a confidential resolution the Ontario chiefs carried demanding a review of the AFN’s financial policies and contracting practices. The AFN executive later voted not to commission the review.

On July 1, 2022, Archibald emailed the briefing note to dozens of AFN chiefs across the country as she pressed for a forensic audit. She also distributed screenshots of internal AFN emails, a confidential chronology of events, and financial statements detailing two years’ worth of AFN contract recipients.

“Attached are documents and emails which in my view show corruption and collusion at the AFN Secretariat,” her email said.

Archibald is facing two defamation lawsuits because of this email and this statement.

The allegations have not been tested and no defences have been filed. CBC News has independently obtained the email and its attached documents.

Archibald’s email included a memo she wrote the chiefs outlining why she felt the audit necessary. This memo said the AFN’s executive committee of national and regional chiefs was called for an urgent meeting in October 2020 where the briefing note was presented.

During the meeting, they were told an employee had transferred nearly $200,000 from the AFN account to their personal bank account in 2019, according to the memo.

Archibald said the AFN received outside legal advice from a human resources lawyer who “told us that we needed to NOT say anything” about what happened, which APTN News previously reported.

“At the time, I said that this was wrong and that we had an obligation to reveal the truth of what happened,” Archibald wrote.

The briefing note itself is marked confidential and indicates the AFN’s current CEO Janice Ciavaglia requested and drafted it.

It said a senior AFN employee received a $191,134 “retiring allowance payout” on Aug. 19, 2019 followed by a part-time contract to continue working. It said it was “unclear” why the AFN would pay out an employee who resigns from full-time employment but then continues to work.

It also said in summer 2020 the AFN learned an AFN director received a revised employment contract that “significantly altered” their severance entitlements on Nov. 27, 2019, so the director would receive a minimum of six months notice upon termination without cause.

The briefing note recommended the AFN dismiss these two employees without cause to limit further expenses, publicity, litigation, reputational damage and potential funding cuts that could stem from an audit uncovering the irregularity.

The briefing note named Tremblay along with the two employees whose contracts were terminated. Tremblay did not receive the contract or payout, but signed the revised contract with the AFN director, according to the note.

Archibald shared this document with chiefs with redactions both times.

“I would suggest that you request the unredacted version from the AFN Secretariat,” she wrote to them in July.

However, it is still possible to see the three employees’ names through the attempted redactions. CBC News is naming only Tremblay because she was the senior official and because the other two employees could not be reached for comment.

Tremblay, who is now CEO of an AFN-funded organization, said she has not seen the briefing note but is unable to comment because issues relating to staff are a human resources matter and bound by privacy and confidentiality.

“In all my dealings with the AFN I have followed the policies, procedures and guidelines and processed all such matters through the AFN Executive Committee. Who at the AFN is implicating me in these matters?” she wrote.

Archibald on multiple occasions told CBC News she couldn’t comment on this topic because a chiefs’ resolution restrains her from discussing internal AFN issues publicly. CBC News contacted Ciavaglia to discuss the briefing note but the AFN supplied a statement instead.

“For reasons of privacy and confidentiality, the AFN does not comment on human resource matters regarding its staff,” the statement said.

“The AFN is unable to confirm the elements of any confidential briefing note, as we were not provided with a copy of the document in your possession.”

CBC News offered to provide Ciavaglia with the document if she wanted to discuss it but the AFN refused further comment.

Ciavaglia responded separately through her lawyer but also declined to answer questions.