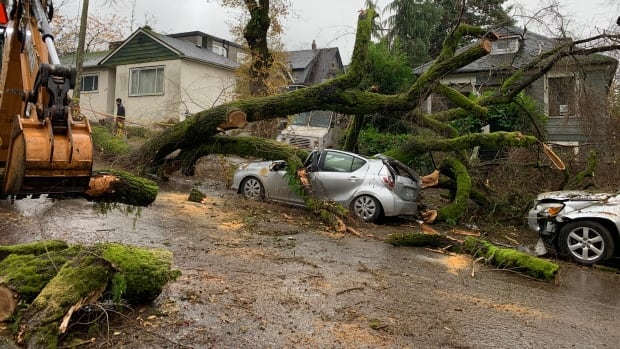 Meteorologists issued heavy wind warnings for the Lower Mainland and other parts of B.C.’s coast on Sunday, one day after a rare waterspout was spotted over the ocean near Vancouver International Airport, bringing fierce winds to the University of British Columbia campus.

The alert lasted only 24 minutes before the funnel cloud vanished, but the incident came amid a very windy weekend in the region, with worse conditions on the way.

Winds are forecast to reach at least 80 km/h starting Monday in Metro Vancouver, and are expected to reach 110 km/h on other parts of the B.C. coast, warned a special weather statement issued Sunday,

Laura De Pascale was heading home from the UBC Fencing Club with a friend on Saturday when they saw lightning.

“Then it started pouring hail,” she recalled. “There was just a bunch of swirling branches and leaves.

“And suddenly, I don’t think I fully realized at the time, I didn’t even notice the tree that fell behind my car.”

She said the strong winds caused a trolley line to break and fall right outside her car door.

“Once you have power lines starting to come down on your car, it’s scary,” she said.

De Pascale and her friends were able to head home without injury but it’s not an event she will soon forget.

“I still feel a bit of disbelief and it’s hard not to think about what could have gone wrong.”

No injuries have been reported from Saturday’s weather event. Several people recorded videos of the waterspout, a tornado that forms above water, and posted them to social media.

That means regular bus service may not commence until Tuesday.

Routes 004 and 014 will continue to use West 16th Avenue to reach the campus, while the 99 bus will use Chancellor Boulevard, Tina Lovgreen, spokesperson for TransLink, said in an emailed statement.

Winds picked up across Metro Vancouver over the weekend, with other parts of the region seeing downed trees and branches unrelated to the tornado.

Meteorologists continue to analyze the phenomenon that descended over UBC on Saturday around 5 p.m. PT, but it’s not the first time B.C.’s coast has seen a funnel cloud.

“Waterspouts can occur over the Strait of Georgia or other coastal waters throughout the year — it’s not actually all that uncommon. However, this one was quite a large one,” Bobby Sekhon, a federal meteorologist with Environment and Climate Change Canada, told CBC News.

“Seeing it close to land is a little bit more rare, especially moving through land … certainly close to populated centres.”

Sekhon said it was caused by a “broad trough” of low pressure, with cold air atop warm air, creating an “unstable environment” combined with “spin” in the atmosphere on Saturday.

“Those ingredients kind of came together and formed this waterspout,” he said.

Metro Vancouver’s waterspout this evening seen from UBC. <a href=”https://t.co/g8KUMRLNAl”>pic.twitter.com/g8KUMRLNAl</a>

And although the phenomenon is not unprecedented in this region, this one was rare for its size — and how close it got to a major city.

He said winds in funnel clouds can hit 80 to 100 km/h or more, but this one did not register on local weather stations.

Sekhon said the chances of another waterspout or tornado are very slight.

“Any time you see a funnel or even worse, a tornado, over water or over land it can be life-threatening — there can be strong wind speeds,” Sekhon said. “You want to stay away from anything that might be flying around.”