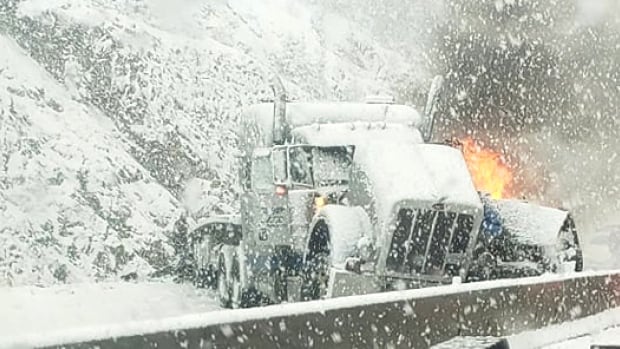 Six people have been rushed to hospital, including two in critical condition, after a fiery multi-vehicle crash on the Coquihalla Highway Friday morning.

A pickup truck hit the cab of the semi. A small passenger car then hit the back of the pickup truck’s flatdeck and caught fire, according to an eyewitness. At least one other vehicle added to the pileup, the witness said.

BCEHS says paramedics transported six patients from the scene. It says two people were airlifted to hospital in critical condition. Four others were taken to hospital with serious injuries by ground ambulance.

At the top of Larson Hill heading north. We’ve been stopped for about 20 minutes now. Snowing heavily. No traffic heading south bound either. <a href=”https://t.co/ipfAloQyWx”>pic.twitter.com/ipfAloQyWx</a>

Heavy snow had been falling on the highway throughout the morning with drivers describing conditions as slushy and sloppy.

Tom Agar, the area manager responsible for the Coquihalla highway for B.C’s Ministry of transport says maintenance crews were among the first to respond, finding a woman trapped in her car, as fire spread among the piled up vehicles.

“The semi had started on fire and we got her vehicle towed out of there as she was pinned inside the vehicle,” he told CBC Radio West host Sarah Penton.

“Everything else was burned out except the [woman’s] vehicle we pulled out. So I’m thankful our crews and staff were out here for that, else she probably wouldn’t be with us today.”

The Coquihalla Highway was closed in both directions near Merritt, B.C., as the emergency response and accident investigation continued.

Drive B.C says the southbound lane is now open and the rest of the highway is expected to be fully reopened later tonight. It says to expect major delays and that alternatives routes are available.

Radio West5:35Tom Agar from the Ministry of Transportation describes the scene of an accident that closed the Coquihalla Highway for much of the day

Tom Agar from the Ministry of Transportation describes the scene of an accident that closed the Coquihalla Highway for much of the day 5:35