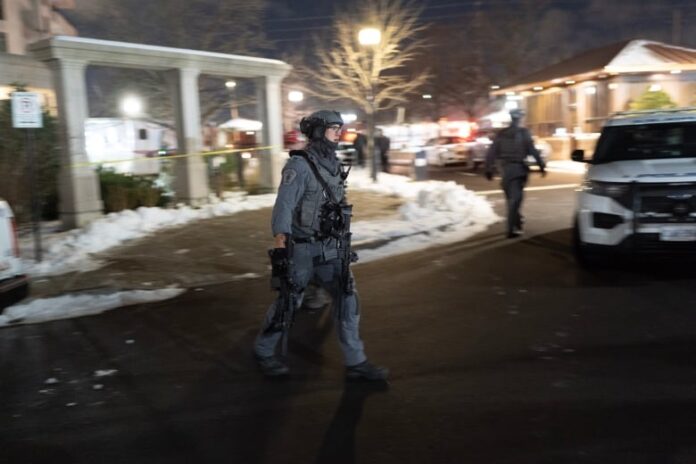 York police said six people, including an alleged gunman, are dead following a shooting at a condo tower in Vaughan on Sunday night.

Officers were called to the building at 7:20 p.m. ET on Sunday in response to a shooting in progress. It’s unclear what drove the violence, but York Regional Police Chief Jim MacSween said five people were killed at the scene, which he described as horrendous.

He said a sixth victim was taken to hospital but is expected to survive. At least one woman, who was conscious, was seen being loaded into an ambulance when news cameras arrived at the building, which is on Jane Street near Rutherford Road.

MacSween said the suspected gunman was killed during an interaction with police. He said there’s no further threat to the community, and expressed his condolences to the victims’ families.

“We’re in the process right now of doing notifications to those families, so at this point I can’t share any information on the victims or the subject,” he said.

The city of Vaughan is located in the Regional Municipality of York, just north of Toronto. The shooting happened at a condo complex not far from one of Vaughan’s best-known attractions, Canada’s Wonderland.

Motive not yet known, chief says

MacSween said it will take some time to determine the motive for the shooting.

The chief said officers arrived at the scene “quite quickly and they went right into the building and dealt with the situation.”

Earlier, Const. Laura Nicolle said police were working with the understanding that there was a single shooter who is now dead following what she called a “very disturbing” weapons call.

Ontario’s Special Investigations Unit (SIU) has been notified, Nicolle confirmed. The SIU looks into any incident in Ontario where someone has died when police are present.

Victims’ next of kin being contacted, police say

Nicolle said it’s not known if there was any relation between the suspect and the victims and that the condo building remains an “active, ongoing scene.”

She said next of kin are still being contacted, so specific information cannot be released at this time.

But Nicolle said it appears that there were victims in more than one unit in the condo building.

Nicolle said the shooting has left “a lot of people” displaced from their homes as police conduct their investigation.

“We want to make sure that [they] know that they’re going to be safe and that we get them back into their home as quickly as we can.”

Meanwhile, MacSween urged residents to “be patient,” adding that officers will do their very best to clear the building as quickly as possible.

He said officers are clearing the building “floor by floor” to make sure nothing is missed.

“They’ll continue to do that work until it’s done. We have engaged with some residents already and asked them for their patience, and so we’re hoping within a couple of hours we can have everybody back, but it’ll take some time.”

Video from the scene showed dozens of emergency vehicles outside the building with their lights flashing. Officers could be seen patrolling the scene with heavy weapons drawn.