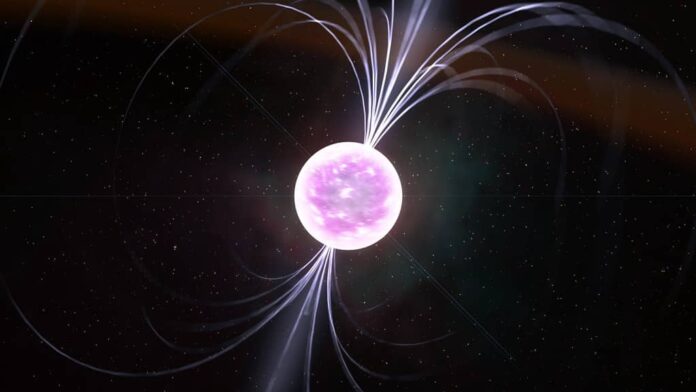 Scientists have discovered an object in space releasing blasts of energy three times an hour. The object is relatively close to Earth at around 4000 lightyears away and is nothing like what astronomers have seen before.

Natasha Hurley-walker from the International Centre for Radio Astronomy

“This object was appearing and disappearing over a few hours during our observations,”

“That was completely unexpected. It was kind of spooky for an astronomer because there’s nothing known in the sky that does that. And it’s really quite close to us – about 4,000 lightyears away. It’s in our galactic backyard.”

One possible explanation for the object could be a neutron star or white dwarf star. Astronomers are speculating that it has an extremely powerful magnetic field.

The object is spinning around so quickly that beams of radiation flash towards Earth three times every hour. For one minute out of every twenty, it is the most substantial radio source in the sky.

A student at Curtin University named Tyrone O’Doherty first spotted the object using the Murchison Widefield Array or MWA telescope located in the Western Australian outback. Since its discovery, it has puzzled any astronomer who has studied it.

“It’s exciting that the source I identified last year has turned out to be such a peculiar object,”

“The MWA’s wide field of view and extreme sensitivity are perfect for surveying the entire sky and detecting the unexpected.”

There are many different objects in space that turn on and off. These objects are coined “transients” and are usually the result of the death of a star or the remnants of star death event

Objects that do so quickly, like a neutron star, are called pulsars. These can flash on and off in mere milliseconds. Other transients can turn on and off over a few days as is the case with supernovae.

This newly discovered object lays somewhere in the middle, which is considered very unusual.

Another mysterious features of this newly discovered object are that it is incredibly bright yet smaller than our own sun. It also shoots out polarised waves indicating that its magnetic field is extremely powerful.

Scientists typically match these features with objects such as magnetars. If this is the case, it will be the first discovery of its kind.

“It’s a type of slowly spinning neutron star that has been predicted to exist theoretically,” said Dr Hurley-Walker.

“But nobody expected to directly detect one like this because we didn’t expect them to be so bright.

“Somehow it’s converting magnetic energy to radio waves much more effectively than anything we’ve seen before.”