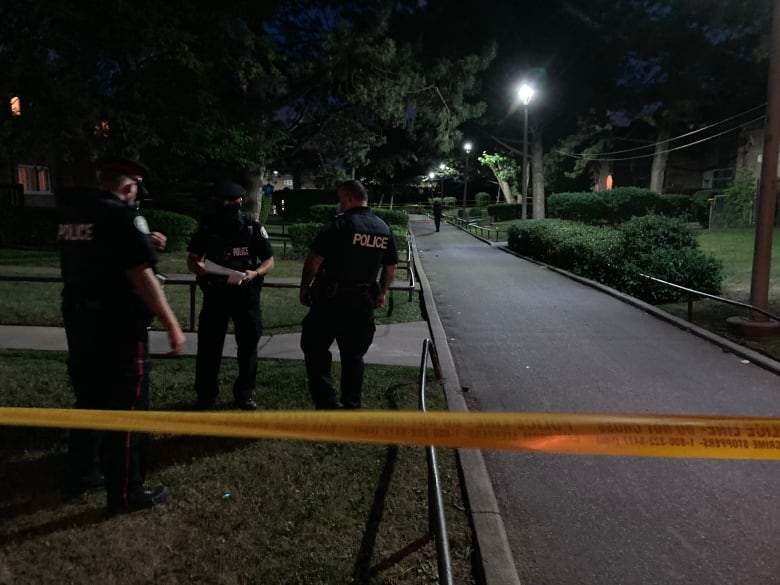 A five-year-old girl remains in life-threatening condition following a shooting during an outdoor children’s birthday party in the Rexdale neighbourhood of northwest Toronto on Saturday evening, police say.

Parks said a one-year-old boy who was grazed by a bullet did not require treatment in hospital.

Police were called to an address on Tandridge Crescent just before 8 p.m. on Saturday following reports of a shooting at a children’s birthday party.

Investigators are keeping details on a vehicle seen leaving the scene, as well as suspect descriptions, to themselves for the time being, said Toronto police Supt. Ron Taverner, speaking with reporters on Sunday.

“We will be releasing that information soon, but right now we’re not,” he said.

Taverner said cameras in the area were recording Saturday night, but “that’s all I’ll say about that.”

He said police don’t believe the children were deliberately targeted, but he couldn’t say more about a possible motive. He stressed that “this is a horrific, horrific situation” but that investigators are on it.

“We have the resources to solve this crime, and we will solve it,” Taverner said.

Skinner appealed for anyone with information to come forward.

“This is a tragedy. There are three children who were shot here tonight,” she said.

“We absolutely need your help, so please call 23 Division at (416) 808-2300 if you have any information that you can provide to help us catch these suspects.”

‘A terrible crime against children and families’

Both Toronto Mayor John Tory and Ontario Premier Doug Ford had strong words on Sunday about the shooting.

“Firing a gun anywhere anytime in the City of Toronto is unacceptable. Doing so at a child’s birthday party goes way beyond that,” Tory said in a statement.

“My thoughts are with the children who were injured and their families and friends as they deal with the terrible impact.”

Tory reiterated that police are working “to find those responsible,” urging anyone with information to contact police.

“My heart breaks for the innocent young victims of this senseless tragedy,” his statement says.

“No one who engages in this kind of heinous gun violence should get away unpunished. The perpetrators must be found and brought to justice.”

What should have been a happy day became a terrible tragedy.– Kirsty Duncan, MP for Etobicoke North

Kirsty Duncan, the federal member of Parliament for Etobicoke North, said she was “horrified” by the incident in her community.

“What should have been a happy day became a terrible tragedy,” Duncan said in a tweet Sunday. “It is unconscionable.”

Etobicoke Coun. Stephen Holyday described the incident as “a terrible crime against children and families” and “an assault on what our community holds most precious.”

“We need to support our police and help them bring those responsible to justice swiftly,” he wrote in an email to CBC News.