Statue of Sir John A. Macdonald in Hamilton, Ont., covered as Indigenous community calls for it to come down 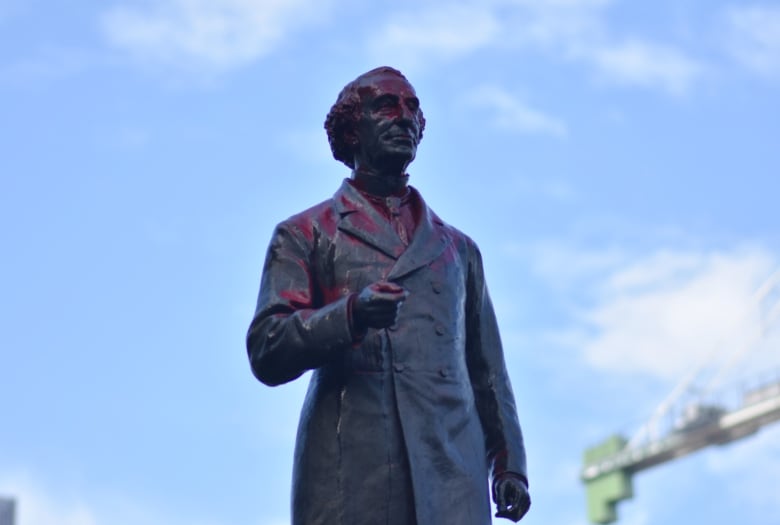 The statue of Sir John A. Macdonald in downtown Hamilton has been covered in fabric from head to toe and wrapped tightly with a red rope.

Shrouding the statue was done during a gathering held at Gore Park on Sunday, as Indigenous community members shared their frustration with the pace at which the city is responding to requests that it be removed.

“For Indigenous folks that have to walk by him every day, I think their lives are more valuable than a hunk of metal,” said Jordan Carrier, a Plains Cree woman and Hamilton resident who helped organize the event.

“In light of the recent events, we’re over waiting for the city to take their time to do these things. We want action,” she said, pointing to preliminary results from a survey of the grounds at the former Kamloops Indian Residential School, which indicate the remains of more than 200 children could be buried at the site.

Sunday’s gathering included speakers who shared stories of their grandparents attending residential schools and also saw attendees place more then 200 silhouettes of children around the park.

Those silhouettes were then carried to city hall where they were planted in the gardens surrounding the building, said Carrier.

“Hopefully tomorrow anybody who has to go into that building, especially the mayor and city councillors, will see that this is something that needs to be expedited,” she said on Sunday.

“We’re sort of sick and tired of being told what our triggers are and what does or does not trigger us.”

City has no plans to remove statue

The city has no plans to take the statue down, according to spokesperson Jen Recine.

“No removal of the statue, for temporary works in Gore Park or otherwise, has been scheduled,” she wrote in an email on Sunday.

Staff were expected to meet on Monday morning to talk about next steps, said Recine.

“Unauthorized markings and materials” are typically removed from city property within one to three business days, she added.

That’s what happened when the statue in Gore Park was covered in red paint in November of last year, with the words “Land Back” painted in front of it.

City crews were out later that same day, using a powerwasher and soap to scrub it clean.

As for the future of the statue, a report about reviewing city landmarks and monuments is expected to go before the Emergency and Community Services committee in July, said Recine, though the “report will not be recommending any actions for any statues or any other landmarks in the city.”

Instead, if passed by the committee and council, it would begin the process to review the issue, according to the spokesperson.

Statue location has been debated before

The statue stands eight feet, three inches tall and was cast in bronze, according to a profile included in the Hamilton Public Library’s history and archives.

It was shipped from England and arrived in Hamilton on Oct. 30, 1893, roughly two years after McDonald’s death.

Sunday’s call for the statue to be moved isn’t the first time its location has been debated.

It was initially placed at the intersection of King and Hughson streets, facing west, but the library’s profile states that following a series of collisions, including one in 1905 that fatally injured a fire chief, it was moved to Gore Park two years later.

A suggestion from a Liberal MP in 1954 that the statue be moved to the James Street end of the park was met with “furor,” reads the profile, and it remained where it stands today.

Other cities have removed statues of Sir. John A. Macdonald in the wake of the discovery in Kamloops.

Charlottetown and Kingston both took down memorials to Canada’s first prime minister following votes from their respective councils. The public school board in Waterloo has also moved to rename a high school named in his honour.

Carrier said she was involved in some early consultations with the city about the statue, and recognizes removing it can be a lengthy process, but added the city’s response on Sunday shows taking it down is “not the priority.”

“If folks like the city, which have committed to truth and reconciliation, are actually committed, the community has spoken. They’ve said ‘I’m triggered. This hurts me.'”

June marks National Indigenous History Month, Carrier noted, but this year it’s been “vigil after vigil” and there has been little celebration. She sees removing the statue as a chance to fix that.