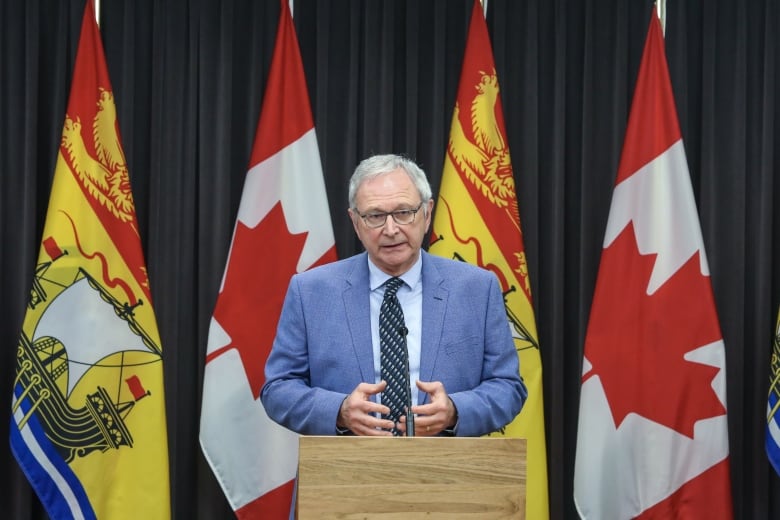 Four residents and a staff member at a long-term care facility are among some of the most recent cases of COVID-19 in northern New Brunswick linked to a family doctor who contracted the virus outside the province and didn’t self-isolate.

New Brunswick Public Health announced three new COVID-19 cases the Campbellton region, also known as Zone 5, at a news conference Sunday. All of the new cases are individuals in their 80s.

That brings the total cluster of cases in the Campbellton region to 12, the chief medical officer of health said.

The new cases include three individuals at a long-term care facility near the northern community. Another case, an individual in their 70s, who’s also a resident at the care facility, tested positive for the virus Saturday.

Five cases total have developed at the health-care facility. Three of the five cases from the facility are in hospital, including one person in intensive care.

An employee at the Manoir de la Vallée in the neighbouring community of Atholville, N.B., tested positive for the virus earlier this week as well.

Four residents and a staff member at a long-term care facility in Campbellton have tested positive for COVID-19. 1:26

About 100 people, including 57 residents could have been exposed to the worker, who was contagious during three shifts at the facility.

The facility includes independent living apartments as well as a special care home.

All staff and residents at the facility have been tested, Dr. Russell said.

All of the province’s active cases are in the Campbellton region, also know as Zone 5.

“There is a possibility the virus could spread beyond that region because the virus has an incubation period of 14 days,” said Dr. Jennifer Russell, New Brunswick’s chief medical officer of health.

All 12 cases are linked to a family doctor who contracted the virus in Quebec and didn’t self-isolate upon his return to New Brunswick. The doctor, who has had contact with about 150 people since returning, has been suspended.

The government is urging people in the Campbellton area and those who travelled there in the last couple weeks to get tested.

“We have a two-week period ahead of us where we’re going to be watching very very carefully what is happening in that region and also around the province because we know that people have left that region since the time that there have been transmission of COVID-19,” Dr. Russell said.

“Every corner of the province needs to be vigilant.”

Facility loses a third of staff

Ten of the 28 staff at the the Manoir de la Vallée long-term care facility left their job because of the COVID-19 outbreak.

“They felt it necessary to leave the facility, which is concerning because at a time like this, it’s important we have everyone there to do what we can,” said Premier Blaine Higgs.

Despite the staff leaving, Higgs said he is not concerned about under staffing “at all.”

Ambulance New Brunswick and the province’s home health-care program, Extra-Mural, are on site at the facility providing additional help caring for the residents.

Province to cut down on testing

Testing sites are set up at the Memorial Civic Centre in Campbellton and the Dalhousie Inch Arran Ice Palace.

Sunday is the last day of mass testing. As of tomorrow, the province will only be testing people who have two symptoms. Those who wish to get tested will have to call Tele-Care at 811.

Those who get a negative test result should monitor for symptoms for the next 14 days. It takes up to 48 hours for test results to come back.

To date, 26,172 tests have been conducted. Of the 132 confirmed cases in New Brunswick, 120 have recovered from the virus.

More than 1,300 test were processed Saturday, which is the highest single-day amount since the pandemic began.

Until last week, New Brunswick had no active cases of the respiratory disease.