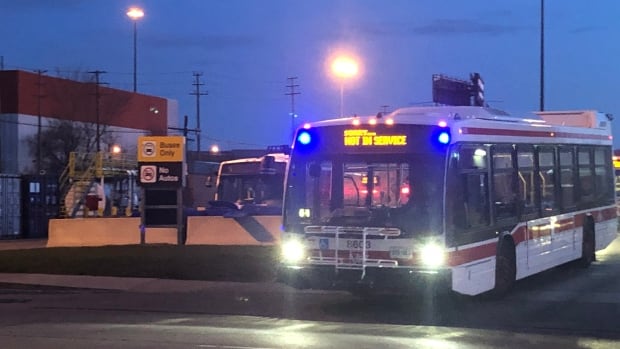 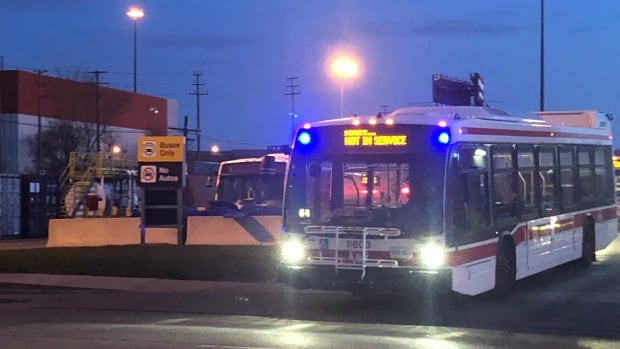 Thirty-three TTC bus drivers walked off the job on Wednesday night because they want more personal protective equipment (PPE) to shield them from the novel coronavirus.

TTC spokesperson Stuart Green said in a statement on Wednesday that bus drivers refused to work at its Queensway Division due to concerns about workplace safety.

The Ontario Ministry of Labour is investigating and will determine whether the circumstances meet the conditions of a work refusal under the Occupational Health and Safety Act, he said.

John Di Nino, president of the Amalgamated Transit Union (ATU) Canada, said the bus drivers invoked their right to refuse work under the act because they are deeply concerned about their health.

Claudio Cappadocia, an executive on ATU 113’s board, recorded this video of the protest and shared it on Facebook:

Green said five bus drivers at the TTC’s Wilson Division refused to work on the same grounds earlier on Wednesday, but the ministry ruled that the circumstances did not meet the conditions of a work refusal.

According to Green, the ministry decided that the TTC has measures in place to protect its workers from COVID-19.

“In making its finding, the ministry inspector cited the TTC’s numerous protective measures like the plexiglass barricade bus operators can close, the blocking off of seats immediately behind the operator, use of rear-door boarding and a collapsible barricade, all of which provide the operator with physical distancing,” he added.

“Also cited in that finding was the provision of protective equipment such as disposable gloves, disinfectant wipes and hand sanitizer to every operator.”

According to Green, the TTC has begun to source and manufacture washable, reusable face masks and that fact was noted by the ministry.

Those masks will be optional and will be given to drivers in batches of three to five each in the next two weeks, he added.

“Operators are currently free to wear masks if they so choose,” Green said.

In late January, the TTC began cleaning its vehicles, including “operator areas,” several times a day.

“I had one member come up to me crying and saying, ‘Look I can’t go home at night. I haven’t hugged my child in two months because I am afraid that I may be infecting my family.’ Those are very compelling stories and very compelling concerns,” he said.

Di Nino said the union would like to see all personal protective equipment, including the use of masks, become mandatory for all operators.

The union says some preliminary discussions have taken place between Local 113 and the TTC.