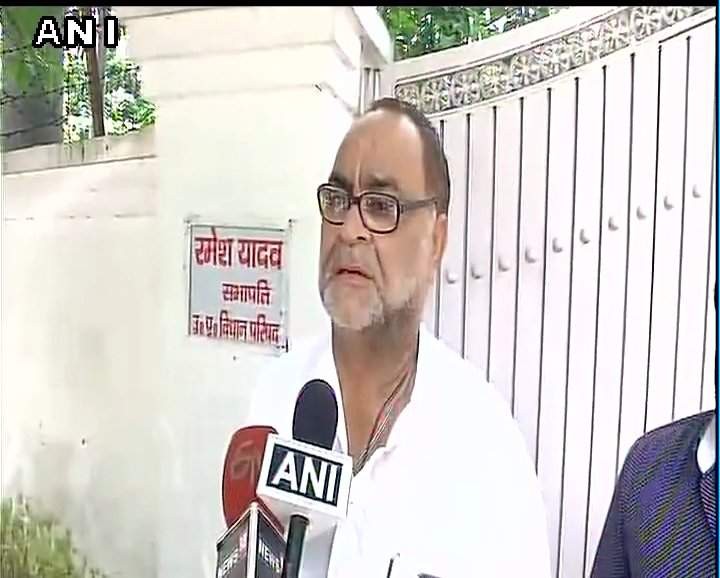 THREE MEMBERS of the Legislative Council (MLCs) in Uttar Pradesh — Bukkal Nawab and Yashwant Singh from the Samajwadi Party (SP) and Thakur Jaiveer Singh from the Bahujan Samaj Party (BSP) — resigned on Saturday, making way for three ministers of the Yogi Adityanath Cabinet. Currently, five members of the State Cabinet, including Adityanath himself, are not members of either House. The development came just an hour before BJP president Amit Shah arrived in the state capital for a three-day visit.

Minutes after the two SP MLCs submitted their resignations to Legislative Council Chairman Ramesh Yadav in the morning, the BSP MLC too met Yadav and handed in his resignation. Sources said the trio may formally join the BJP soon. “Maine apni seat Yogiji ke liye samarpit kar di hai (I have dedicated my seat to Yogiji),” said Yashwant Singh.

He said he had resigned over Akhilesh’s remark in the House on China. Akhilesh was reported to have said that India was not in a position to take on China. “I am deeply pained by the anti-national and pro-China statement that Akhilesh made in the House on Wednesday. Before taking any decision, I waited for Akhilesh to give an explanation in the House, but he did not turn up on Friday. I am a disciple of late Prime Minister Chandrashekhar, and I could not compromise with the issue of the nation. I will be with India, not China,” he said.

Nawab, who was known to be close to SP patron Mulayam Singh Yadav, also praised Adityanath, and said he was ready to meet BJP leaders. Sidelined in the party organisation after Akhilesh Yadav replaced Mulayam as party president, Nawab said he had been “feeling suffocated” in the SP for the last one year. Jaiveer Singh, who was accompanied by former BSP leader Swami Prasad Maurya at the time of handing in his resignation, could not be contacted. Maurya, who joined the BJP ahead of the state assembly elections, is now a minister in Adityanath’s Cabinet. Jaiveer Singh was earlier the BJP’s district secretary in Aligarh, before joining the BSP. Reacting to the development, Akhilesh said the BJP was luring MLCs as it wanted to avoid facing elections.

BSP chief Mayawati said that after Bihar and Gujarat, the political development in UP made it clear that the Narendra Modi government had created a threat for democracy. She said the BJP government was misusing agencies like the CBI, Income Tax and Enforcement Directorate to target the Opposition. Meanwhile, Leglislative Council Chairman Ramesh Yadav accepted the MLCs’ resignations and notified that the seats had fallen vacant. While the SP MLCs’ terms were ending on July 7, 2022, the BSP MLC’s term was ending in May 2018.

Besides Adityanath, Deputy Chief Ministers Keshav Prasad Maurya and Dinesh Sharma, and Ministers Swatantra Deo Singh and Mohsin Raja are not members of either House in the state. They will have to become members of the Assembly or Council by next month. According to sources, Adityanath and Maurya are likely to contest Assembly elections.