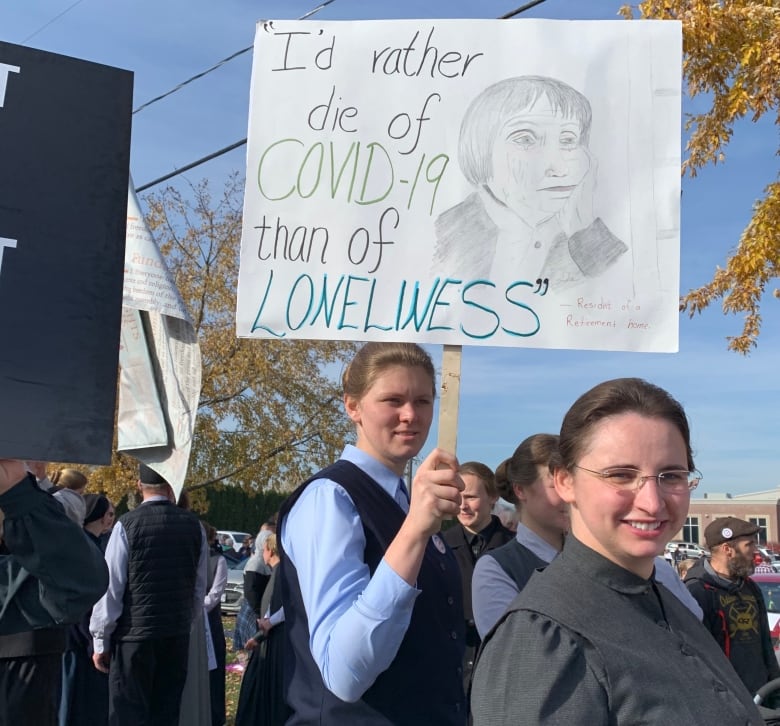 Chanting “Rise up!” and “Freedom is essential,” at one point up to 2,000 people marched through the streets of Aylmer, Ont., calling for the end of public health measures such as mask wearing and physical distancing that say encroach on their rights.

Supported by other groups who have held similar rallies in Ottawa and Toronto, the protesters held signs that said “Facts over fear” and “No new normal.”

The marchers included many people from the town’s large religious communities.

“I am here to standing up for freedom. Freedom not to have the government overreach, freedom of assembly with those we love, freedom to go where we want to go,” said Herma Van Meppelen Scheppink, who came from nearby St. Thomas, Ont., to show her support.

With a population of 7,500, the town of Aylmer, pop. 7,500, has the highest case rate of any surrounding community and the highest in its health region, even though Southwestern Public Health includes two counties and two larger cities. Public health officials in the region and surrounding areas called the rally dangerous, saying the combination of a large crowd not wearing masks could be disastrous for the spread of the novel coronavirus that causes COVID-19.

The rally was organized by Kimberly Neudorf, an Aylmer mom with backing from the controversial Church of God pastor Henry Hildebrandt, who has fought against public health measures and shutting of his church since the beginning of the pandemic.

“I’m here to voice my opposition to a tyrannical government. I want to show support to this community. People are here for masks, I’m here for freedom,” said Catherine Carter, who came from Windsor, Ont., and has gone to Ottawa to similar rallies.

“I have been watching this movement grow in the last six months. The louder people are, the better people will hear us.”

When news of the protest, and those from other cities, spread in Aylmer, the mayor declared a state of emergency, freeing up more resources for the police.

Aylmer Police and Ontario Provincial Police officers stood by during the rally at the East Elgin Community Complex and the subsequent march through town.

Those who support public health measures in the town held their own small rally in the morning, and some lined the streets watching the protesters walk by.

“This is my home. The majority of Aylmer is adhering to the mask requirements, but we have this small group of people who are bringing in hundreds and hundreds of people from outside the community, encouraging them to shop in our stores,” said Anastasia Gelinas. “And the virus will surely spread, and they just don’t care.”

“They’re spreading terror through this community. I’m worried about the town and the businesses in the town. Some have quit their jobs because there are so many people coming in without masks. I’m embarrassed. The town, the vast majority, is not like this.”

Mike Moore stood amid the large number of protesters holding a sign that read “Protect your neighbours, wear a mask!”

“I believe we’re in a pandemic with the coronavirus and we need to take it seriously. The government mandated masks for a reason,” he said. “I’m embarrassed. I’ve never seen anything like it here in this quiet community.”