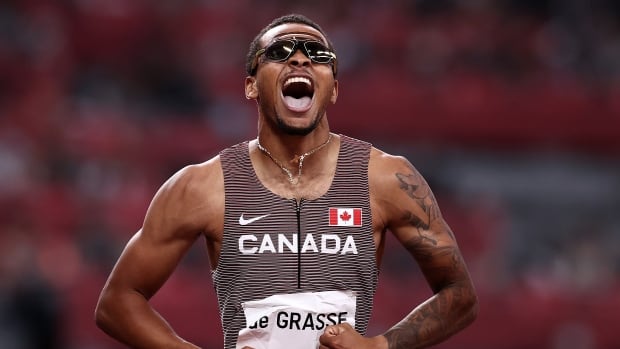 This is an excerpt from The Buzzer, which is CBC Sports’ daily email newsletter. Stay up to speed on what’s happening in sports by subscribing here.

The World Athletics Championships are underway at Hayward Field on the University of Oregon campus. Here are the top Canadian contenders to watch today and over the weekend, highlighted by the country’s biggest track star attempting to keep his remarkable podium streak alive in the sport’s marquee event:

Dating back to the surprising 100m bronze he won at his world championships debut in 2015, De Grasse has entered seven individual events at the worlds or Olympics and reached the podium in all seven of them. His best event is the 200m — De Grasse took silver at the 2016 Olympics and the 2019 worlds before winning his first Olympic gold in the 200 last summer in Tokyo — but he’s been consistently among the planet’s best in the 100m as well, taking bronze at the 2015 and ’19 worlds and at the last two Summer Olympics.

The 7-for-7 podium streak might be in danger, though. Slowed by a foot injury and, more recently, a bout of COVID-19 that he says hit him pretty hard, the 27-year-old has yet to crack 10 seconds in the 100m this year. The competition at worlds will be fierce, with defending champion Christian Coleman of the United States raring to go after a suspension for missing too many drug tests kept him out of the Tokyo Olympics. Italy’s Lamont Marcell Jacobs will be looking to prove his surprise Olympic gold was no fluke, and Olympic silver medallist Fred Kerley ran a world-leading 9.76 three weeks ago at the U.S. championships on this very same track. Trayvon Bromell, who was the Olympic favourite before flaming out in the semis in Tokyo, put down a 9.81 at the U.S. nationals.

But, if we’ve learned anything, it’s to never underestimate De Grasse. He’s looked slow in the lead-up to big meets before, only to flip the switch when the brightest lights turn on. Plus, his last 100m result was promising: a season-best 10.05 to win a Diamond League race in Oslo in mid-June, right before he caught COVID. Coach Glenroy Gilbert said yesterday that De Grasse is healthy and “ready to go,” so he might just be peaking at the right time again.

Joining De Grasse in the 100m heats will be his Canadian 4x100m relay teammates Jerome Blake and Aaron Brown, who won his fifth national 100m title last month while De Grasse was out with COVID.

She finished way back in 28th place at the Tokyo Olympics, but Mitton owns one of the world’s best results in 2022. The Canadian-record 20.33m toss she launched at the national championships a few weeks ago has been bettered by just two other women — American Chase Ealey and China’s Jiayuan Song, who are both competing at worlds.

After advancing easily in the qualifying round this afternoon, Rogers should contend for the podium. Last year, the University of California, Berkeley student-athlete broke the women’s U.S. collegiate record en route to winning her second NCAA title before placing fifth at the Tokyo Olympics. This year, the 23-year-old is ranked fourth in the world, meaning just three women have bettered her best throw. Only two of them, Americans Brooke Andersen and Janee’ Kassanavoid are at worlds.

Like Mitton in the shot put, Rogers is trying to become the first Canadian woman to win a worlds medal in her event.

The 31-year-old’s best event is the 5,000m. He won silver in it at the Tokyo Olympics after taking bronze at the last world championships, in 2019. But Ahmed is strong in the 10,000 too. He’s won Pan Am gold and Commonwealth silver in this race and finished sixth at both the 2021 Olympics and the 2019 worlds. Ahmed broke his own Canadian record in the 10,000 this year before missing the national championships with a minor calf issue.

Other stuff to know:

*The big non-Canadian story tonight will be American track star Allyson Felix’s swan song. The 13-time world champion (four individual, nine relay) and seven-time Olympic gold medallist (one individual) is expected to line up for her final competitive race in the mixed 4x400m relay final at 10:50 p.m. ET. Canada does not have a team in this event.

*Following the men’s 100m final on Saturday night, Sunday’s marquee event is the women’s 100m. Jamaican star Elaine Thompson-Herah is seeking her first 100m world title after winning back-to-back Olympic 100/200 doubles. In Tokyo, Thompson-Herah led a Jamaican sweep of the 100m podium with Shelly-Ann Fraser-Pryce (silver) and Shericka Jackson (bronze), who also teamed with her to win gold in the 4×100. Fraser-Pryce, 35, is the defending world champ. Canadians Khamica Bingham and Crystal Emmanuel, who were both eliminated in the semifinals in Tokyo, will line up for the heats Saturday at 8:10 p.m. ET. The semis are Sunday at 8:33 p.m. ET, followed by the final at 10:50 p.m. ET.

CBC Sports’ exclusive live coverage of the world championships is on now and continues every day through the conclusion of the meet on July 24. Events will be shown live on CBCSports.ca, the CBC Sports app and the free CBC Gem streaming service, and there will be weekend broadcasts on the CBC TV network. Check the full streaming and broadcast schedule here for details.

CBC Gem will also carry a live daily primetime show focusing on coverage of the day’s events with broadcasters Andi Petrillo, Mark Lee, Kate Van Buskirk, Michael Smith and Scott Russell trackside. It will be preceded by a daily 30-minute digital show hosted by Olympian Anastasia Bucsis with reporting from Devin Heroux, who’s on the ground in Eugene. That show is available on CBC Gem, CBCSports.ca and the CBC Olympics Twitter, Facebook and YouTube feeds.