12 friends dreamed of owning a bar. So they bought one, in the middle of nowhere, on Vancouver Island 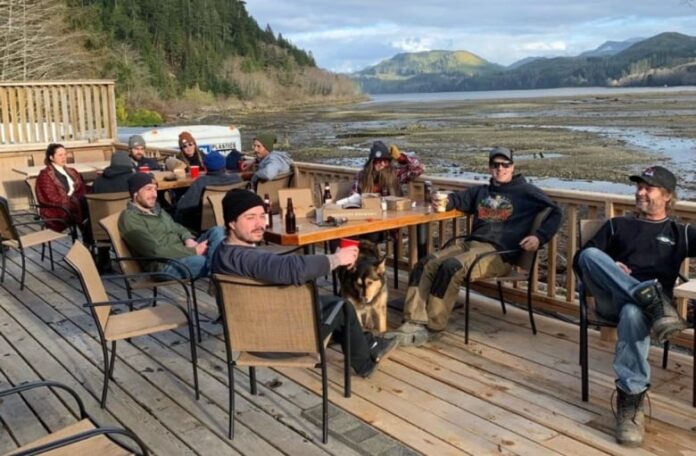 Tim Sangha and some friends were on a motorcycle trip through northern Vancouver Island in July 2020 when they came upon a pub on a gravel road in the remote hamlet of Holberg, about 540 kilometres northwest of Victoria.

It was Sunday and the place was closed, but the owner, Pat Gwynne, agreed to serve them beer and chicken wings as they sat on the pub’s deck overlooking Holberg Inlet.

“About an hour into our [visit] there, she says: ‘You guys should buy this place,'” Sangha said. “And we all looked at each other and said: ‘No, I don’t think so. Thanks, anyway.'”

But the experience stuck with Sangha and his friends — so much so that they had a change of heart.

By November that same year, the group became proud owners of the Scarlet Ibis Pub.

Ten of the 12 co-owners are based in Nanaimo, about 110 kilometres north of Victoria.

One is in Courtenay, about 220 kilometres north of the capital, and another is based in western Ontario.

The group includes a heavy duty mechanic, a heavy equipment operator, a master electrician and a master carpenter.

So why did this disparate group want to buy a pub in the middle of nowhere?

“We all thought it would be a great idea to own a bar. I mean, every guy’s dream, at least in our circle of friends, is owning a bar,” he said.

“We found 12 guys that all had the same dream — same dream, different skills.”

That array of skills came in handy when they decided to renovate the pub, which had been in a state of disrepair.

“It had been there for about 40-plus years and no real maintenance had been done to the place,” Sangha said.

Co-owner Roy McNair, a retired commercial banker, says one of them is usually at the pub around once a month, to keep an eye on the place and do what needs to be done.

“Everybody every time they go up enjoys it,” he said. “It’s beautiful country up there. Sometimes we have enough time to do a little hike.”

Outside the Scarlet Ibis, a sign states it’s the most remote pub on Vancouver Island.

Sangha said the Scarlet Ibis used to claim it was the most remote pub in the province, but was notified of a pub on Haida Gwaii, about 1,200 kilometres northwest of Victoria, that was more isolated.

How exactly does he define remote?

“You have to really want to go there to get there,” he said.

The Scarlet Ibis serves classic pub fare like burgers, pizzas and chicken wings, and even has its own craft beer.

Not surprisingly, supply chain management can be an issue.

“That’s probably our biggest nemesis, getting products to the pub,” Sangha said.

They work with a cross-docking facility in Port Hardy, about 50 kilometres east of Holberg, that delivers food and alcohol to the pub along a gravel road with no cellphone service.

Staffing is also an issue. Right now, they have one employee who cooks, serves and cleans. They’re looking to bring on someone to help out.

The 2016 census had the population of the unincorporated community of Holberg at 35.

The clientele for the pub, which is open year-round, includes workers from a Western Forest Products operation in the area, according to Sangha.

It also attracts travellers visiting nearby Cape Scott Provincial Park, on the northwestern tip of the island. The owners have built adventure huts near the pub in an effort to draw in more travellers with a love for the outdoors.

“They’re just dying for a shower and some good food and and they come in and they’re just so appreciative of us being there. So that’s a great feeling.”