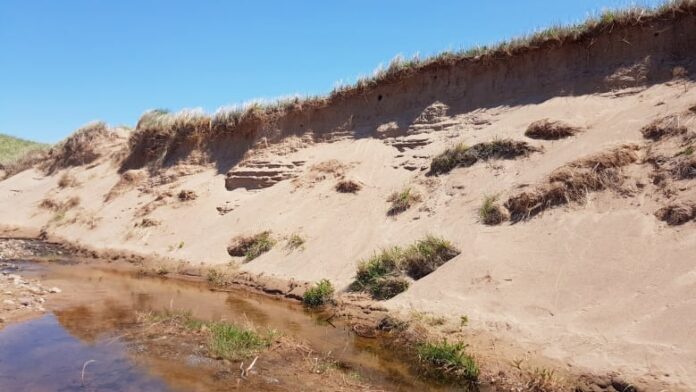 Nadine Hunt’s love for nature started early. As a child, she and her mother would often go to the beach near their home in Mabou, Cape Breton.

“She taught me to respect the beach. If there was any litter or garbage around, we were picking it up,” she said.

Hunt said the area’s unique natural environment and peaceful atmosphere are what makes it so special.

“It’s not just the beautiful beach and the warm water that we experience here in the summertime, but also the fact that you can always find a spot to be by yourself,” she said.

Cabot Cape Breton, a golf resort developer with three other courses in Inverness County, has said it intends to try for a second time to obtain permission from the Department of Natural Resources and Renewables to build a golf course on part of West Mabou Beach Provincial Park. A similar proposal from the company in 2018 was rejected after the department’s environmental assessment of the area.

Hunt has fought for decades to protect West Mabou Beach. When it was officially designated as a provincial park in 2001, she thought the area would finally be protected.

But the level of protection provincial parks have in Nova Scotia isn’t as straightforward as it may seem.

The Provincial Parks Act gives the minister of natural resources and renewables a number of powers, including to “dispose of flora or fauna in a provincial park” and “grant a license, privilege or concession with respect to a provincial park” for up to five years.

Cabinet has even more sweeping powers, including to decrease the size of a park, terminate the status of a park, grant leases for park land and to regulate the use of lands in a provincial park.

Environmental lawyer Jamie Simpson said the act gives those individuals “a high degree of discretion” over what happens to a provincial park. Cabinet or the minister can decide, without public consultation or an act of the legislature, to allow any kind of development that they see fit.

Simpson said although the introduction to the act says provincial parks are “dedicated in perpetuity for the benefit of present and future generations of Nova Scotians,” the government is free to interpret that in any way it likes.

“Government could make an argument that that would include golf,” said Simpson.

In order to get this kind of permission from cabinet or the minister, any person or company can approach them with a proposal that they can decide to accept.

“The way that’s usually done is through the back door, you know, quiet conversations,” said Dale Smith, a former employee in the Natural Resources and Renewables Department.

Now retired, Smith was the manager of parks planning from 1978 to 1998 and then the director of protected areas until 2001. He’s spent much of his retirement promoting environmental protection and conservation.

Smith said in his experience, a culture of supporting forestry and other industry is “baked in” to the department.

“They’re really just not supportive of protection. Officially they are, but when they’re dragged along toward protecting an area or supporting it, you can see the heel marks,” said Smith.

That’s why he’d like to see management of provincial parks transferred to the Department of Environment and Climate Change.

“[The Department of Natural Resources and Renewables] have forestry, energy, mines, and you know that’s perfectly legitimate stuff, but its orientation and purpose is totally different and in many ways contradictory and in conflict with the other,” said Smith.

Another way to solidify the protection of provincial parks could be to amend the Provincial Parks Act to match up with other conservation areas, said Simpson.

The legislation governing wilderness areas is far more restrictive than the Provincial Parks Act. Mining, quarrying and energy development are specifically prohibited and removing an area’s designation requires an act of legislature.

Simpson said that the government could also add an amendment to prevent private developers from excluding the public from accessing a provincial park.

“We can’t keep going through this. This is hard on communities, it’s hard on people and it’s a waste of time for the government,” said Hunt.

“What is ‘legally protected,’ right? There has to be some teeth to that.”

A spokesperson for Natural Resources and Renewables said in an email that the “broad scope” of the department lets it “integrate all the values of our natural resources and informs better decision making.”

The spokesperson added that many private businesses operate in provincial parks, like food vendors and outdoor equipment rental facilities.

“Other proposals come forward from time to time and the department always remains open to hearing ideas that may provide public benefit.”