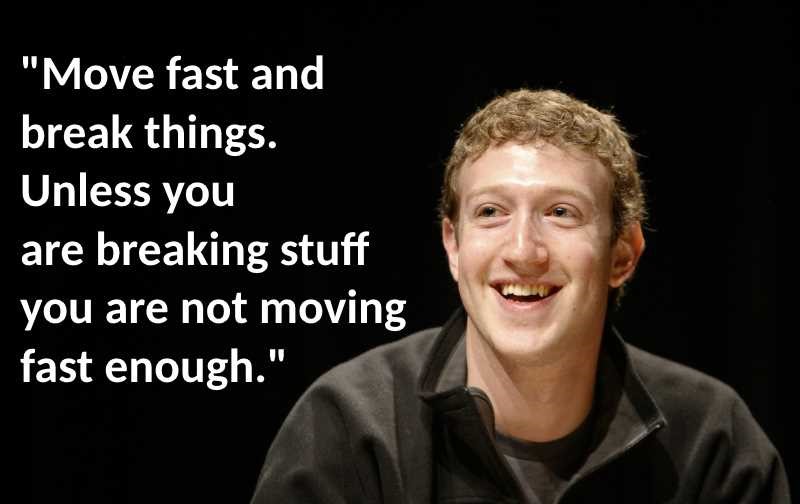 Mark Zuckerberg, without any doubt, is one of the most influential people in the world today. The success that Mark has achieved is won by one in millions. By making the world a smaller place with Facebook, he revolutionized communication manners.

Mark Zuckerberg, CEO and co-founder of Facebook has achieved what only a few could dream of achieving in a short span of time. Living by his famous mantra, “move fast and break things,” Zuckerberg and his team scaled Facebook into a social network that today connects 1.8 billion people.

Here are some of the lessons that could help young entrepreneurs survive and thrive in the world of entrepreneurship.

Facebook has long stuck to the motto of “Move Fast and Break Things,” which helped them grow into the world’s largest social network. Zuckerberg has always been an advocate of moving fast, even if it breaks a few things. Facebook was in a predicament when they introduced a new NewsFeed. They acted on the spur of the moment and gave users options to see both the new and old NewsFeed, which resolved the issue. They also faced a backlash from users when they introduced their Timeline feature. Still, their move-fast approach helped them iron out issues in an expedient manner without cultivating any mistrust.

Another characteristic that most successful entrepreneurs share is that they all value time over everything else. Mark Zuckerberg is not an exception to this. For him, age is just a number. He wants to achieve bigger things in life, which is why he values his time. He understands that you cannot get it back once gone, even if you spend millions of dollars on it. That is where his “Move fast and break things” philosophy originated in the first place.

Facebook doesn’t guess — it tests, all to ensure it delivers the best possible experience to users.

For instance, on even given day, Facebook can run up to 10,000 different versions of the social-media network to measure how many people are sharing and connecting, along with how much revenue the site is generating.

“Giving people the tools to be able to go get that data, without having to argue whether their idea’s good through layers of management before testing something, frees people up to move quicker,” he says.

That swiftness helps staffers move forward — so they can get more feedback. “We have this saying at Facebook that ‘done is better than ‘perfect’—that’s the idea,” Zuckerberg tells Hoffman. “Having something that you can get feedback from the community on, so you can start to learn whether you’re even going in the right direction at all, is much better than trying to polish something up completely.”

3. Be Convinced and Passionate About What You Do

When you closely scrutinize the lives of some of the most successful entrepreneurs over the globe, you will notice a common trait in all of them. They are passionate about what they do. The same passion has enabled Facebook to innovate continuously and overcome every obstacle it is the way. That same passion helped our Facebook prodigy rejects multitudes of buyout offers, even in the face of adversity. Donald Trump sums it up brilliantly when he said, “Without passion, you don’t have energy, and without energy, you have nothing.” 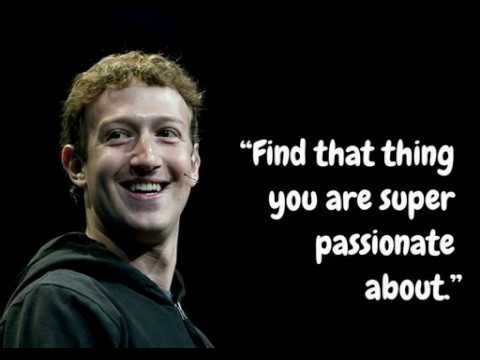 When Facebook first rolled out its News Feed, the features that allow people to see updates of your friends’ activities, the public didn’t welcome the change with open arms.

“There were a lot of people who were voicing concerns about it,” Zuckerberg recalls.

Despite the criticism, Zuckerberg and his team knew they were onto something.

“It just comes down conviction—how much you believe in that thing,” he tells Hoffman, adding, “We really believed that this was a good thing—not just me, but the whole team that was working on it.”

And they were right. The engagement numbers went up dramatically after the feature launched – and News Feed continues to be a major pillar in the Facebook experience.

Having convictions and knowing why they’ll help you grow can help you decide when to listen to feedback and wait for the critics.

4. You are only as strong as the team around you.

The difference between good companies and great companies lies in the hires, says Zuckerberg. He says better companies have founders who are confident enough to surround themselves with stronger talents.

To this end, Zuckerberg has developed a simple rule: Never hire someone you wouldn’t work for. “If the tables were turned, and you were looking for a job, would you be comfortable working for this person?” he says. ”I basically think that if the answer to that is no, then you’re doing something expedient, but you’re not doing as well as you can on that.”

There’s a big team behind Facebook. All of them are the cream of the particular expertise. Mark didn’t get this team as a gift from someone. He himself worked to build this team.

This approach ensures new hires help the company evolve. “There are things that Sheryl, for example, is just much stronger than me at—and that makes me better, and makes Facebook better,” he says. “I am not afraid or threatened by that—I value that.” 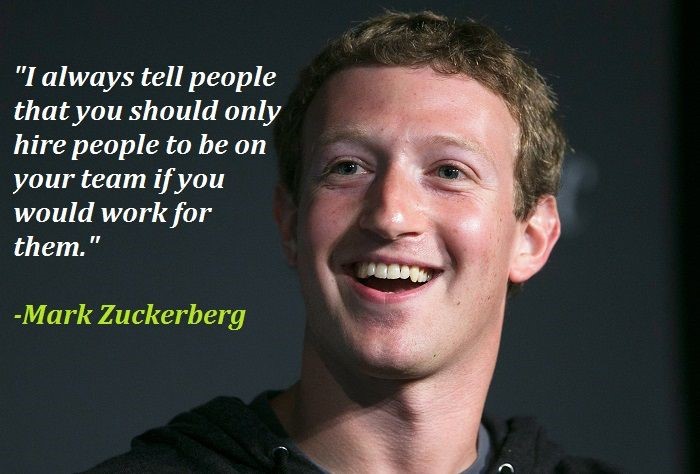 It’s more important to love what you do, to be giving it all your time (it takes a lot of time, especially in the startup world), to have a vision, and stay true to it no matter what.

According to Terry Semel, CEO of Yahoo!, Zuckerberg is the only person he’s ever met who said no to a billion dollars. That’s what happened when the young passionate entrepreneur rejected his offer. His reason was that he wasn’t doing it for the money.

Zuck believed in Facebook from day one and wanted to see it grow. At some point, he had to change direction. The idea of the product itself was changing too. But he knew he wanted to keep working on it, didn’t want to see his hard work in the hands of others, believed in the potential of the social media, and was sure that only he and the other people involved in the project were able to make the most of it.

So if you have a business idea, are already a business owner, or don’t do it for the money. Love what you do first, care about it, dedicate enough time and energy, and the money will come. But then you will have deserved it as you’ll be offering value to people.

6. Be Patient and Consistent

Facebook’s success didn’t happen overnight, and those who are still hoping for fast results these days are not ready to enter the business world.

You can’t go without hard work. It’s not only about creating the product. There’s also a mindset of success being developed and a powerful vision growing in your mind.

If you spend tens of hours working on something if you think it solves a problem people have, and if you market it right, they will pay you for this, and if you add passion to that, you’re onto something.

But there are too many distractions these days. People usually give up early on while their project is still in its first version and no money is coming in. But big things take time. And you’ll need to be selective as your time is limited.

A startup may take around a decade of your life.

That includes creating the minimum viable product, getting it out there and asking for feedback, marketing, connecting with partners and investors, making hundreds of changes to the initial product to make it better – to upgrade it and add features.

But that will also make you successful, let you make a difference in the world, become a big name in your industry. Then you’ll have the power to affect other people’s lives, to encourage young business enthusiasts and help them achieve the same.

Back then, this may have seemed like nothing compared to all the other projects the rest of the Harvard programmers were working on. But if you’re on the right track, if you’re passionate about the work you do and see its potential, know that you need to keep going no matter what.

8. Be open to change without losing sight of your goals.

Since its launch, Facebook underwent massive changes, i.e.from technology to the business layer, everything evolved for the better. Changes kept on happening, but the goal was to make users happy.

According to Mark Zuckerberg, you should not expect good results and success without making your product great. No matter your role, you need to understand your product like the palm of your hand. Look for loopholes and fix them as soon as possible. Despite being the CEO of the company, he works in coordination with his team to improve Facebook. As a young entrepreneur, you need to focus on what your customers want and tailor your product accordingly.

10. Explore Before You Commit

One of the most common mistakes that young entrepreneurs make is that they blindly jump on the bandwagon and follow every popular trend. They adopt everything that is making big waves without diligent research. Mark Zuckerberg has a completely different take on this. He suggests that young entrepreneurs should always pick their battles carefully. Explore and do your researches before signing a business deal. Otherwise, you could land into trouble. According to Zuckerburg, “The biggest risk is not taking any risk.” Although you should be ready to break the glass ceiling and take risks, they should be calculated. Making business commitments without proper research is a recipe for disaster.

If you want to succeed as a young entrepreneur and touch unprecedented heights, you should move fast, be passionate, and persistent. Give your product due attention and iron out the flaws in the product. Most importantly, hire the right people to work for you, especially those who complement your skills.