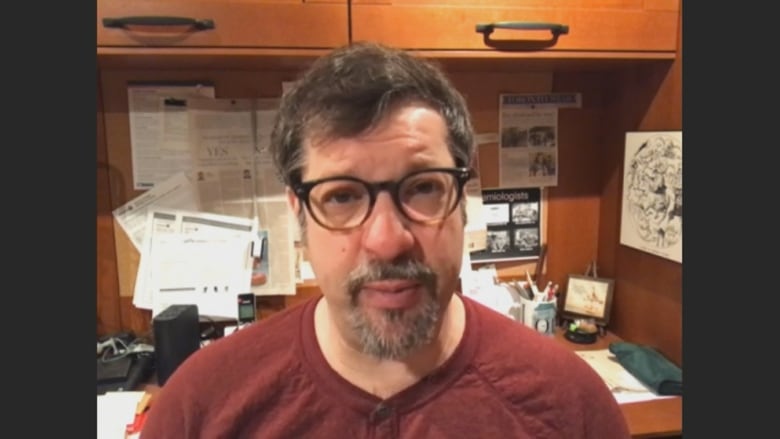 Prince Edward Island’s rate of COVID-19 has reached levels never before recorded, not just in P.E.I. but in any province since the start of the pandemic, according to figures from the federal government.

As of Monday, P.E.I. has 4,241 active cases according to the province’s website — that means one in 40 Islanders is now counted as a confirmed, active case. As well, there would be more cases that haven’t been identified.

“When you look at it as a rate or as a proportion of the population, that’s really high — that’s remarkably high.”

There have been an average of 472 cases per day over the last 7 days on P.E.I.

There are currently two people in hospital being treated for COVID-19 and seven who were admitted for other reasons but tested positive on or after admission.

There are two outbreaks at long-term care homes — Garden Home and Summerset Manor — and 44 child-care centres with cases or outbreaks of COVID-19.

“People need to really understand when they walk out their front door that COVID is probably nearby — P.E.I. is not that big a place, and those are some very, very high numbers,” Furness said.

For the first 21 months of the pandemic, relatively few Islanders contracted COVID-19. Then the Omicron wave hit in mid-December and peaked in January, but cases on P.E.I. started rising again as restrictions were lifted in mid-February. Public and private gatherings could be larger, sports resumed, isolation requirements eased for vaccinated travellers and the P.E.I. Vax Pass was discontinued.

The wave continues to rise and is now higher than any other province has recorded through this pandemic. Although, a strict comparison may be confounded by different levels of testing in different provinces.

In her most recent interview with CBC, P.E.I. Chief Public Health Officer Dr. Heather Morrison said the sharp increase in cases was “what we expected” after lifting restrictions, and pointed out that to date, most cases had not been severe enough to warrant hospitalization.

Morrison also pointed out that spread of the virus was mostly happening when friends and family gathered and were unmasked — noting masks work well.

Even among people who feel they are young and healthy and really wouldn’t suffer much, in some cases the damage is still really enormous.— Colin Furness

Furness thinks everyone needs to be more diligent with masking, and believes all provinces should give out N95 masks.

“I think people need to take personal responsibility for diligence … this is no time for complacency,” said Furness. “This is a collective problem; it’s a serious problem. It’s worse than the numbers actually say and yet people do have a lot of agency, a lot of ability to be part of the solution … wearing their mask, being careful in order to bring those numbers down faster.”

‘This is a virus you do not want’

He said one thing that’s working against P.E.I., ironically, is the fact the Island had so little COVID-19 previously, so people had not developed natural immunity before this wave struck. Now there will be, but he said it doesn’t last longer than a few months and the Island does not have the numbers to provide herd immunity and halt another wave.

He said P.E.I.’s high vaccination rate has prevented most Islanders from becoming seriously ill when they do contract COVID-19, but said with these numbers, there will be more deaths due to the virus.

There have been 16 COVID-19-related deaths on P.E.I. so far — most were residents of long-term care.

“Omicron may be mild for many, but it is very severe for some, especially those not vaccinated,” Furness said.

He warned that even those who don’t feel severely ill from COVID-19 can have lasting damage.

“It’s in your bloodstream, it’s doing harm to your vascular system, it’s causing brain tissue loss — it’s doing a lot of systemic things,” he said. “That harm happens in even fairly mild cases. This is a virus you do not want … even among people who feel they are young and healthy and really wouldn’t suffer much, in some cases the damage is still really enormous.”

The number of deaths around the world from COVID has now topped six million.