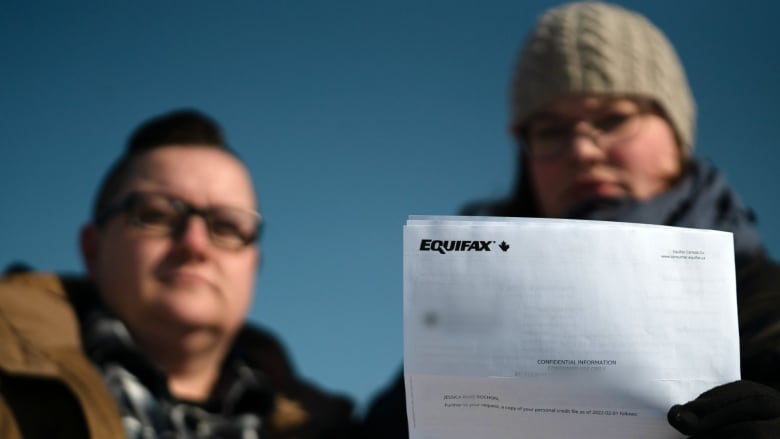 Jessica Rochon from Ottawa says she has always been good with her money, so she was floored to find out she and her wife had been denied a mortgage pre-approval because of someone else’s bad credit — a woman who lives a province away in Quebec with almost the same name.

The two Rochons are not related and have never met, but their Equifax credit history appears to have been mixed into one file, causing financial problems — and a lot of headaches — for the Ottawa Rochon.

She says her pristine credit score plummeted and there was a collection added to her file at some point that isn’t clear from the report. She found out at the worst time: when she and her wife were looking to buy their first home together last August.

“I thought, this can’t be real. I had never been late for a payment or definitely not let something go to collections,” Rochon told Go Public. “I was so surprised this could happen. I’ve been so careful.”

By the time Rochon contacted Go Public, she’d been fighting for five months to get Equifax to correct the record, having to explain the situation over and over again to different Equifax agents but getting nowhere.

“The definition of insanity is doing the same thing over and over again. [It was] incredibly frustrating. Equifax told me it would take five to 20 business days to correct errors,” Rochon said.

Rochon is one of dozens of people contacting Go Public, who say the country’s two major credit bureaus Equifax and TransUnion — both private companies — are failing to deal with errors on credit reports, leading to serious problems for some.

“There are just so many credit inaccuracies … and some provinces don’t even have a time period in which credit bureaus have to respond. So, in our experience, they often don’t,” said John Lawford, executive director for the Public Interest Advocacy Centre, a consumer rights group.

The financial consequences can be significant, says Lawford, who’s seen people lose out on mortgages or loans when they need them the most.

When Rochon first reached out to Equifax in August to try to get the issue resolved, she says she thought it wouldn’t be difficult since the company had a web page dedicated to her specific kind of problem “which just goes to show that it’s a lot more common than we think,” she said.

But she says her efforts to dispute the information were met with resistance; often waiting on hold only to be told Equifax’s system was down or that a supervisor wasn’t available when she asked to speak with one.

Even when she did, she says nothing came of it. “It was almost laughable at this point because it’s so ridiculous.”

The couple eventually found another mortgage broker who was able to convince the lender to only consider Rochon’s TransUnion credit history and ignore the Equifax one.

But by that time, it was too late. Prices for detached homes in Ottawa had increased from an average of $674,449 in August to $771,739 in January: a 14 per cent jump, according to the Ottawa Real Estate Board.

The couple says they are now priced out of buying the kind of house or townhouse they wanted — with properties selling at more than $100-thousand above asking price.

After Go Public asked Equifax Canada about Rochon’s situation, the company was able to correct her credit history in one week. We also spoke with the other Jessica Rochon, who has a different middle name.

She didn’t want to do an interview, but says some of the information on the file wasn’t hers either. She wonders if the credit history of a third person was mixed in too. Jessica Rochon is a common name in Quebec. 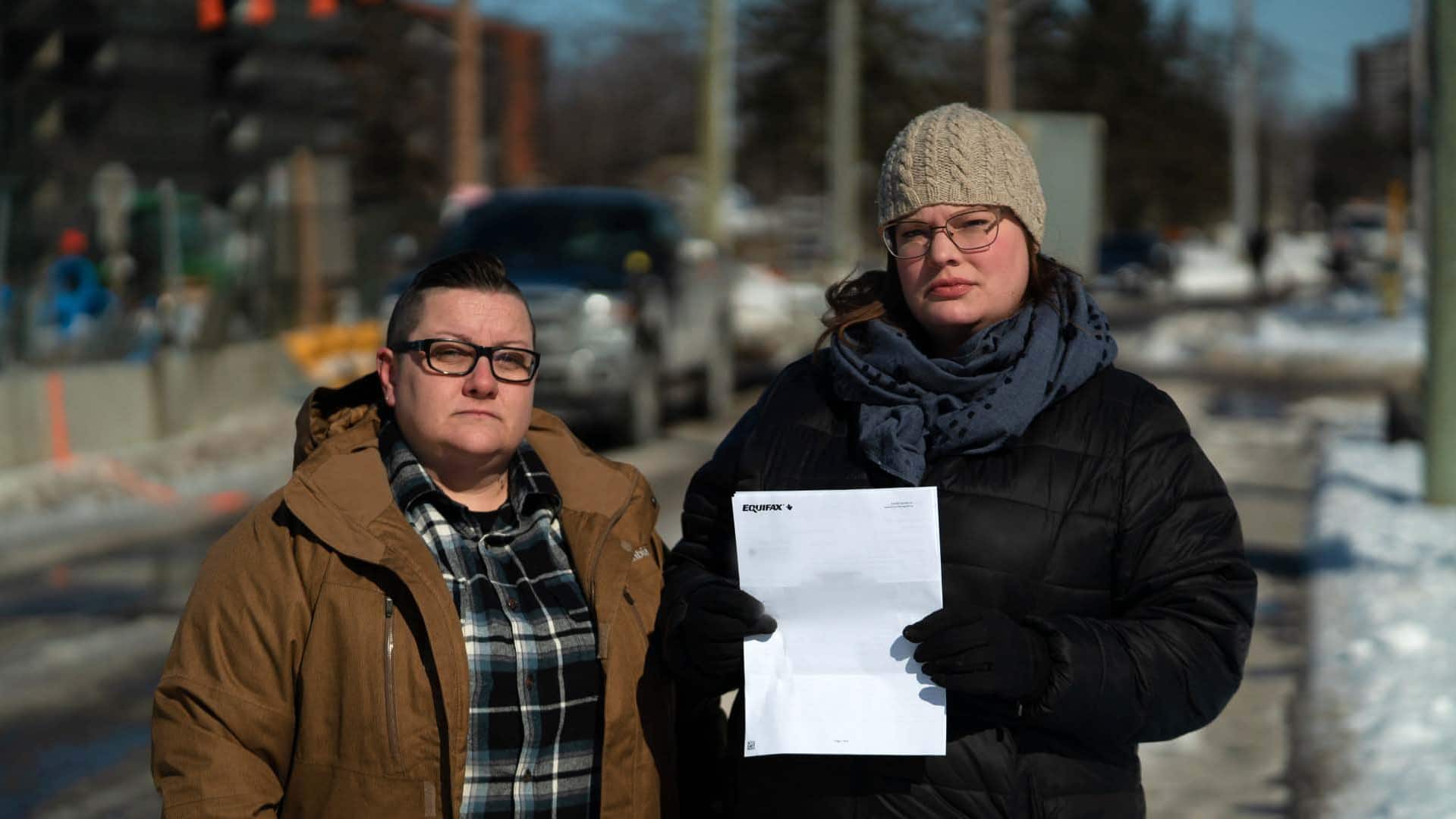 After her credit report from Equifax was mixed up with information from someone with a similar name, Ottawa resident Jessica Rochon says she her wife had been denied a mortgage pre-approval because of someone else’s bad credit 2:06

Equifax Canada says it can’t discuss Rochon’s case, citing privacy rules, but says the pandemic has resulted in “a reduced, rotating workforce and slower connection times for agents who were … required to work remotely while processing consumer issues.”

Despite Rochon being told her errors would be resolved in five to 20 business days, Equifax says it “endeavoured” to advise consumers of the longer processing times through a notice on its website.

In 2016, Go Public told the story of a fraud victim who had been battling Equifax and Walmart for three years about errors on her credit report.

Of the two credit bureaus operating in Canada, Equifax gets far more complaints than TransUnion, according to the numbers provided by provincial and territorial departments that oversee the companies.

For example, in Ontario over the past three years, Equifax had triple the number of complaints that TransUnion had, 93 to 31 respectively.

Why it’s so hard to fix errors

Experts say credit bureaus often fail to properly respond to consumers who have found errors on their credit reports because, in many parts of the country, there is no specific, mandated deadline for them to check and fix problems.

“It’s very much in the hands of the consumers to continue to harass Equifax and TransUnion, which is a daunting process,” said credit expert Richard Moxely, author of The Credit Game and owner of a credit-help company by the same name.

A few provinces do have deadlines. In Alberta, for example, credit reporting agencies have 45 days to correct information. Rochon’s home province of Ontario has no deadline.

Moxley says the biggest problem is that there isn’t one place consumers can get the answers and go to for help. Both Equifax and TransUnion have their own complaint systems. Consumers can also turn to the provincial regulators; rules can differ depending where you live in the country.

The federal Privacy Commissioner’s Office also deals with complaints but only those that relate to the disclosure of private credit information.

“It makes it frustrating for consumers. [Many] don’t know what the next steps are, what their recourse is, or even what the truth is,” Moxley said.

Equifax says credit errors can happen when lenders or creditors report the wrong information, in cases of identity theft, or if two people have some combination of common names, similar social insurance numbers, similar birth dates or similar addresses. The company says it’s working to address the processing times to pre-pandemic service levels.

Go Public asked all the provinces and territories how many complaints — before and during the pandemic — had been received about Equifax.

Those who responded say complaints have increased during COVID-19 and the number one complaint is errors on credit reports.

A Public Interest Advocacy Centre (PIAC) report on credit reporting found one in five Canadians say they had problems with errors on their credit report.

Of those, 10 per cent believed they were denied financial services because of those errors, according to the report, Credit Reporting: How Are Consumers Faring?

That report is more than 15 years old, but PIAC’s Lawford believes little has changed, and there doesn’t seem to be anything more recent in Canada.

In the U.S., the Consumer Financial Protection Bureau (CFPB) received 700,000 complaints about incomplete or inaccurate credit reports involving Equifax, Experian (US only), and TransUnion between January 2020 and September 2021.

That represented more than half of all complaints received by the agency during that period, even though the CFPB also overseas banks, lenders and other financial companies. The U.S. has a 30-day deadline for credit reporting agencies to respond to disputes.

As for Rochon, she’s grateful to have the errors on her credit history fixed, but says she and her wife continue to be priced out of the housing market because of the delays making the fix.

“It’s incredibly frustrating and very time consuming. Every time you call it takes at least an hour and people are just telling you the same thing. I’m sure they’re just reading from a script and saying it will be done in a certain amount of time.”

Where to file a complaint: