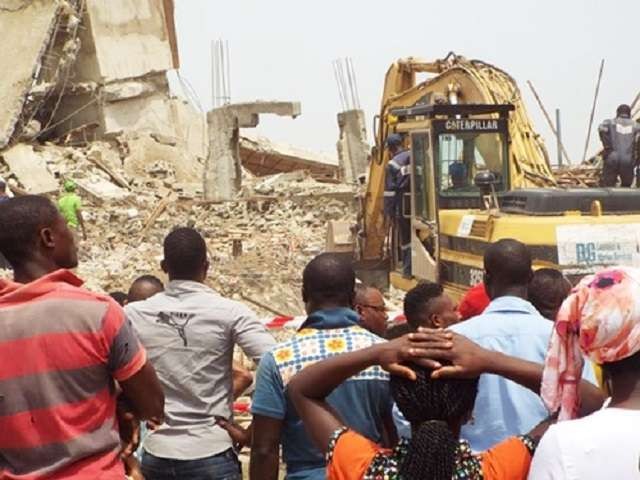 The Lagos State Government on Monday said whistle blowing is the surest way to tackle the incessant building collapse in the state.

The Lagos State Commissioner for Physical Planning and Urban Development, Wasiu Anifowoshe, gave the charge at the site of the collapsed building in Lagos Island.
‎
The commissioner noted that the building was a defective building under illegal renovation with occupants still residing in it.

Mr. Anifowose disclosed that Lagosians must be willing to assist government by raising alarm whenever they see any illegal development in any area of the state.

“This is one out of several worrisome experiences we face everyday on the job,” he said.

“Dealing with illegal developments here and there in Lagos State should be a joint effort between Lagosians and Government.

“We need information of such unlawful activities from responsible Lagosians so as to be able to curb the excesses of unscrupulous developers and owners of property in Lagos State.”

He added that to avert such occurrences, the state government recently recruited additional field officers to ensure effective monitoring of defective structures.

He, however, noted that government cannot do it alone but would need the support of the people.

“In this particular case, the owners took advantage of the long holiday and the fact that the building is hidden right inside those narrow streets in Lagos Island to quickly carry out an unlawful renovation; but unfortunately, the building came down.”

Mr. Anifowoshe, however, said that the state rescue team from relevant agencies were carrying out rescue operations.

He said reports show that two people have died and 14 victims who were trapped have been rescued alive and given adequate medical treatment.

The state has witnessed a number of incidences of collapse buildings in the past weeks.

Before the Lagos Island collapse incidence on Monday, there had been incidences of building collapse in Lekki and Isolo areas of the state.