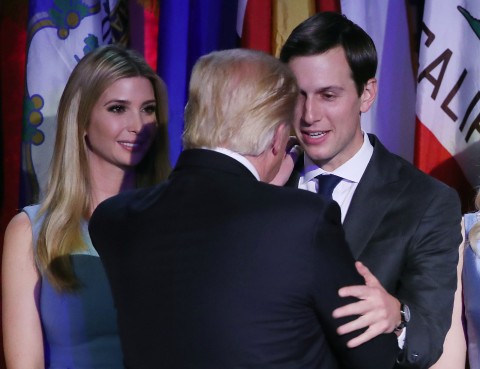 The Trump administration argued over the weekend that back-channel communications are acceptable in building dialogue with foreign governments, part of an effort to minimize fallout over White House adviser Jared Kushner’s reported discussion about creating a secret conduit to the Kremlin at a Russian diplomatic compound.

But some former administration officials on Sunday criticized the use of such secret channels, especially during a presidential transition, saying they could send a confusing message and be manipulated by a foreign power.

Democrats raised new concerns about Kushner. And the top-ranking Democrat on the House committee investigating potential collusion between the Trump campaign and Russia called for a review of Kushner’s security clearance.

The controversy is the latest to tie the most senior ranks of President Trump’s administration to Moscow amid multiple investigations into Russian interference in the election. It comes as Trump returned to Washington from his first international trip, renewed his tweets about unfair media coverage, and eyed a major retooling of his White House staff to deal with Russia-related scrutiny.

“It’s both normal, in my opinion, and acceptable,” Kelly said on ABC News’s “This Week.” “Any way that you can communicate with people, particularly organizations that are maybe not particularly friendly to us is a good thing.”

But foreign policy experts and former officials told The Washington Post such a request of the Russians would be inappropriate unless carefully coordinated with the Obama administration, which was in office at the time. They said any secret communications could have left Kushner vulnerable to manipulation by Russian officials.

The Washington Post reported Friday that Kushner discussed the possibility of setting up secret and secure communications between the Trump transition team and the Kremlin during a December 2016 meeting with Russian Ambassador Sergey Kislyak. The conversation was relayed by Kislyak to Moscow and intercepted by U.S. intelligence officials, according to U.S. officials briefed on the reports.

Kislyak reportedly was taken aback by the request, which involved possibly using Russian communications equipment at its embassy or consulate.

Kushner’s meeting with Kislyak was not initially disclosed when Trump’s son-in-law sought a security clearance. Media reports revealed the meeting, along with another private session Kushner had with a representative of a Russian bank. Kushner, who is married to Trump’s daughter Ivanka, is now a senior White House adviser with wide-ranging foreign policy and domestic duties.

“If you’re going to create a back channel that relies solely on the Russian communications and apparatus, that’s a really serious issue,” said Mark Lowenthal, a former assistant director at the CIA. “That’s extremely dangerous.”

Kelly on Sunday did not explicitly confirm that Kushner made the request or that the use of Russian diplomatic facilities was considered. He suggested that Kushner would have relayed any information exchanged in such meetings to the U.S. government to try to broker a more favorable relationship with an adversary.

“Back-channel communications with people are ways to communicate with people, again not in front of the press, as an example, but that information is not necessarily kept secret from the rest of the government,” Kelly said on NBC’s “Meet the Press.”

The meeting with the Russian ambassador occurred when Kushner was not yet a government employee, and the effort’s secrecy gave the appearance that he and other senior Trump aides were not sharing their moves with the Obama administration.

“I do think there ought to be a review of his security clearance to find out whether he was truthful, whether he was candid,” Schiff said. “If not, there’s no way he can maintain that kind of a clearance.”

The president, who has often weighed in angrily about stories suggesting ties between his campaign officials and Russia, has not responded specifically to the Kushner allegations. But in a series of tweets early Sunday, he accused reporters of inventing stories and sources.

“It is my opinion that many of the leaks coming out of the White House are fabricated lies made up by the #FakeNews media,” Trump wrote in one tweet.

Trump, who was initially expected to stop by the PGA golf tournament hosted at the Trump National Golf Club in Virginia, made no public appearances Sunday.

Beyond security concerns, a proposed back channel would have been a breach of democratic protocol, said Eliot A. Cohen, a former counselor to President George W. Bush’s State Department. After an election, the president-elect and his staff typically contact foreign governments in coordination with the current administration, Cohen said.

“There’s no way that it can be appropriate to say, ‘I want to use a hostile government’s communications system to avoid our government knowing anything about it,’ ” Cohen said.

Other meetings with foreign dignitaries were treated with similar secrecy during the Trump transition. Kushner, retired Lt. Gen. Michael Flynn and now-White House chief strategist Stephen K. Bannon also met with the crown prince of Abu Dhabi in New York, a meeting the Obama administration learned about when the prince’s name appeared on a flight manifest.

U.S. diplomats have relied on back channels with foreign counterparts in other situations involving sensitive negotiations. President Franklin D. Roosevelt used a group of go-betweens to privately maintain close relations with British statesman Winston Churchill while the United States remained officially neutral before entering the Second World War. Former Secretary of State Henry Kissinger had a personal relationship with Anatoly Dobrynin, who was the Soviet ambassador to the United States for two decades, and the two men often met unofficially.

More recently, the Obama administration opened a secret line of communication with Cuba in an effort to secure the release of political prisoners and move toward a normalized diplomatic relationships. A small team of senior White House officials and Cuban officials met quietly in Canada and the Vatican for over a year in order to keep the meetings from the public eye, although State Department officials executed a coordinated strategy publicly.

Jon Finer, a senior State Department official in the Obama administration, said Kushner’s reported back-channel effort illustrates “that the Trump team had less trust in the American government than in a foreign adversary that undermined our election.

“And the million-dollar question then becomes: What was so urgent and so sensitive that the president needed it to be handled this way? Every explanation offered so far has been wholly unsatisfying,” Finer said.

Adam Entous and Paul Kane contributed to this report.