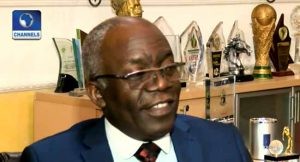 More reactions have continued to trail the recent legislature-executive disagreements over some projects which the Federal Ministry of Works, Power and Housing condemned the manner in which the National Assembly handled the proposed funding.

The National Assembly had also criticised the minister, Mr Babatunde Fashola for misleading statements and vague details provided in some of the figures in the projects proposed by the ministry.

Addressing the controversy over the budget impasse, a senior lawyer, Mr Femi Falana noted that the National Assembly cannot re-write the budget.

“You can’t re-write the budget, that is the point,” Falana said on Sunday Politics while highlighting what needed to be done to restructure Nigeria.

He explained further that: “There is no way you can put N10bn or N20bn without specifying, that will not be budgeting because Section 81 is talking about details of the estimate and expenditure. So you can’t have an omnibus figure”.

“If that was done on the part of the executive, it was clearly against the law on budget. Again, that is where the National Assembly is empowered by Section 81 to scrutinise the budget and make sure you do not have omnibus provisions or duplications,” the lawyer added.