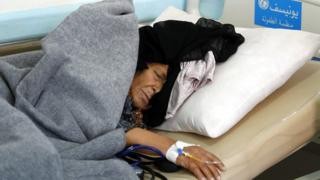 Stephen O’Brien was speaking directly to the UN Security Council, telling them “urgent action is required”.

Yemen is in the midst of a humanitarian crisis, with almost seven million people on the brink of famine.

An outbreak of cholera has also killed 500 people, and the UN expects 150,000 cases in the next six months.

Mr O’Brien said the suffering of Yemenis was not a coincidence, or the “result of forces beyond our control” – but rather the fault of those involved and inaction by world powers.

“The people of Yemen are being subjected to deprivation, disease and death as the world watches,” he said.

He said that despite “generous pledges” only 24% of the $2.1 billion needed for humanitarian aid had been received.

For the past two years, the country has been embroiled in fighting between forces loyal to the internationally recognised president, backed by a Saudi-led coalition, and Shia Houthi rebels.

Al-Qaeda, meanwhile, has taken advantage of the chaos to reinforce its presence in the south and south-east of the country.

More than 8,000 people – mostly civilians – have been killed and close to 44,500 others injured since the conflict escalated in March 2015, UN figures say.

An estimated 18.8 million people are in need of humanitarian assistance.

Also speaking today to the UN Security Council was the UN envoy for Yemen, Ismael Ould Cheikh Ahmed, who had just returned from talks in the country.

But neither side has been willing to compromise, he said, and “the call for peace… is still falling on deaf ears”.

“The reluctance of the key parties to embrace the concessions needed for peace, or even discuss them, remains extremely troubling,” he said.

“Yemenis are paying a price for their needless delay.”