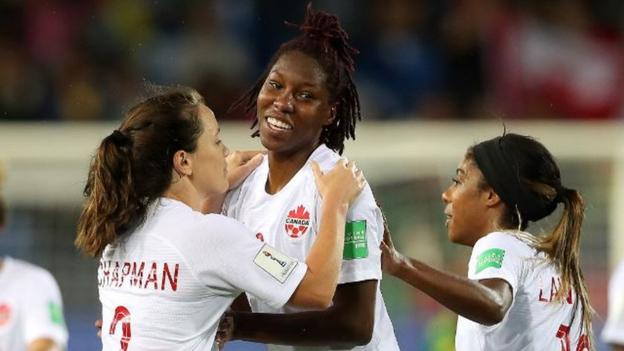 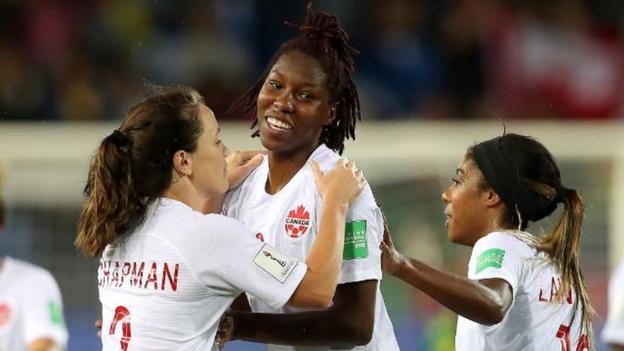 A header by Kadeisha Buchanan, voted best young player at the 2015 Women’s World Cup, ensured Canada opened their 2019 campaign with a win over Cameroon.

The defender, who plays club football in France for Lyon, struck from a corner at the end of the first half to give Canada a 1-0 win in Montpellier.

Cameroon, one of the lowest ranked teams at the tournament, went close through Claudine Meffometou’s header.

Canada’s Nichelle Prince hit the post with a deflected shot at 0-0.

Although the opening game in Group E lacked clear-cut chances, Canada did enough to go top before rivals New Zealand and the Netherlands meet on Tuesday in Le Havre (14:00 BST).

“You could sense some nervousness but that’s because this means so much for the players,” said Canada’s boss Kenneth Heiner-Moller.

“We knew it was going to be a battle and Cameroon were a hard team to play, especially when they were sitting that deep.”

All eyes were on Canada’s captain Christine Sinclair, who is four goals away from becoming the outright all-time leading scorer in men’s and women’s international football.

Sinclair, who turns 36 on Wednesday, went close with an early deflected header while Meffometou cleared off the line after the ball bounced off the veteran Canada player’s knee and rolled towards the net in the closing stages.

The winning goal came after a perfectly timed run into the six-yard area by 23-year-old defender Buchanan, who now has four goals in 89 appearances for Canada.

“We got the nerves out in this game,” said Buchanan.

“For sure we are going to come back stronger for the next game and keep the momentum going. We will be better.”

Cameroon, who appointed Alain Djeumfa as manager in January after sacking Joseph Ndoko, worked hard but with the exception of Meffometou’s header, rarely looked like equalising and managed just 207 passes compared to Canada’s 580.

“We were up against a good team and found ourselves in sticky situations,” said Cameroon boss Djeumfa.

“I’m very happy with the way we played but Canada are a more mature team.”

One worry for Canada coach Heiner-Moller, however, is his side’s lack of goals. Despite victory, Canada have not scored more than once in their last nine World Cup matches.

A first for Buchanan – the stats