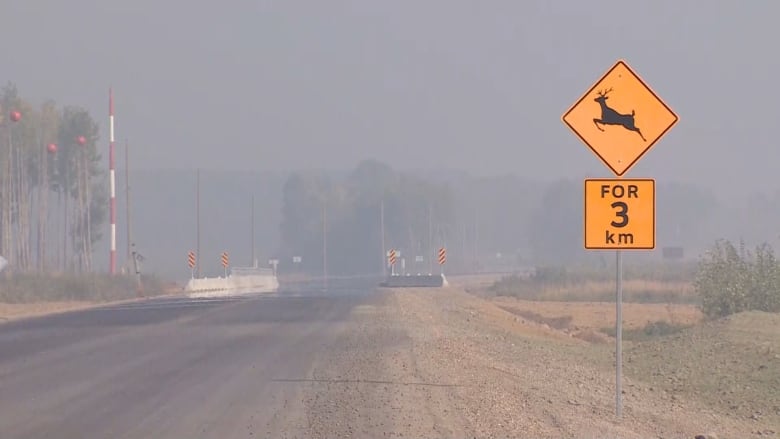 Environment Canada is maintaining advisories for a portion of northeast B.C. and the southern half of the province and has extended air quality statements across southern Alberta.

Wildfires contributing to the smoke include a 287-square-kilometre blaze near Hudson’s Hope in northeast B.C. that has forced more than 1,000 people from their homes.

The B.C. Wildfire Service says crews are working to contain the east flank of the suspected lightning-caused fire, which threatens Hudson’s Hope as well as the W.A.C. Bennett Dam, a key power generator for the province.

The flames were just four kilometres from the W.A.C. Bennett dam on Monday afternoon.

“These dams and their generating stations are critical public infrastructure. Given this, both facilities will continue to be operated with limited staff,” B.C. Hydro said in a statement.

The organization said it is also possible to operate the dam remotely, should it become necessary, and that their structures are made of concrete and not easily damaged by fire.

Fire information officer Sarah Hall said Wednesday is expected to be one of the hottest and driest days of the week, and while containment on the east flank has been going well, crews are seeing increased fire behaviour on the south and west flanks.

“We are going to be conducting an infrared scan to identify any hotspots … and also to identify the perimeter of the fire to see if we’ve experienced any growth,” Hall said Tuesday night.

During the day Tuesday, Hall said firefighters tested structural protections set up at the dam and in the town of Hudson’s Hope. She says sprinkler systems, water lines, and water bladders, which are filled up and ready to connect to fire hoses, are all in place if needed.

Fires east of Vancouver had also prompted evacuation orders and alerts west and east of Hope, as well as the closure of the eastbound lanes of Highway 1. One eastbound lane has since reopened.

Tuesday evening, the Fraser Valley Regional District and the District of Hope rescinded evacuation orders for the Hunter Creek area and five properties in Laidlaw, about 14 kilometres south of downtown Hope.

An evacuation alert for the Floods Hope area was also lifted, though authorities said orders and alerts could be reinstated depending on weather conditions and fire behaviour going forward.

The Flood Falls wildfire, classified as out of control, is burning across very steep terrain, which has made accessing it a challenge for firefighting crews on the ground. The wildfire service has deployed helicopters to bucket the east and west flanks of this fire.

The mayor of the District of Hope told CBC’s The Early Edition that smoke is complicating firefighting efforts.

“The visibility is so poor they can’t fly in and even the helicopters are having problems at times getting close enough,” said Mayor Peter Robb.

“The fire behaviour has lessened to a point that they feel comfortable taking down structural protection on those homes [that were under evacuation orders or alerts],” she said, adding the wildfire service is expecting to see a decrease in fire behaviour in the coming days.

“That’s very good news,” she said. “It means that firefighters can get a good handle on this fire.”