Why you can’t drive on this new, $616M Toronto-area highway 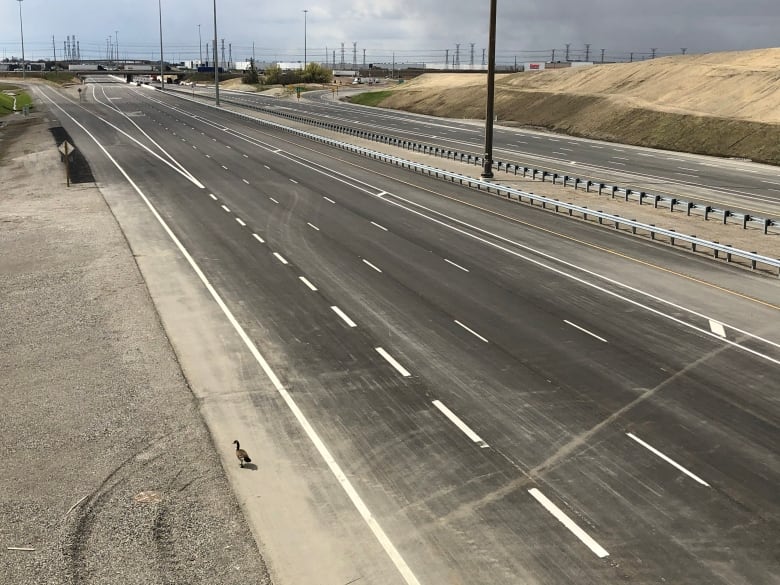 The $616-million extension of Highway 427 near Toronto sits unused and off-limits to drivers amid a legal dispute between the Ford government and the private consortium hired to build it, CBC News has learned.

To the naked eye, the extension appears complete: the lanes are painted, road signs are up. Bridges and off-ramps have been built. Traffic lights are installed.

But the provincial government has told CBC News the highway, built as part of a public-private partnership, can’t open due to safety concerns.

The consortium, LINK427, disputes that. In a lawsuit filed this week, it accuses the government of stalling the opening of the extension so it can delay paying the consortium more than $144 million it is owed.

According to the lawsuit, which has not been tested in court, the consortium and the province are embroiled in other battles involving unspecified amounts of money for extra work done on the project but not paid for.

The process to resolve those disputes can’t begin until after the highway extension is opened and the province makes the $144-million final contract payment to LINK427.

Caught in the middle are Ontario drivers who can’t use the highway extension, despite an independent, third-party road safety audit (RSA) that deemed it safe for public use in February, according to the lawsuit.

Case about ‘government abusing its powers’

The money can’t be released until the highway extension also gets what’s known as a Substantial Completion Certificate from another independent, third-party consultant.

“This case is about the government abusing its powers to force [LINK427] to undertake costly last-minute upgrades to a major highway without compensation,” according to the lawsuit.

The unpaid money is putting contractors in financial peril and “preventing the people of Ontario from using a ready-for-use highway,” LINK427 alleges.

The consortium is seeking a court order forcing the province to pay up and open the highway extension.

The lawsuit says the province is also demanding $10,000 a day in penalties from the consortium for every day the highway has remained closed since its targeted completion date of Sept 30, 2020. This comes despite alleged construction delays caused, in part, by the province’s pandemic restrictions in the spring of 2020.

The province has yet to file a statement of defence.

LINK427 did not respond to specific questions from CBC News about the situation.

The province says it has concerns about water potentially pooling on the highway.

“Specifically, the roadway was not built to the specifications in the contract. This results in highway surface drainage and related safety concerns,” according to Ian McConachie, the manager of media relations and issues for Infrastructure Ontario.

“As LINK427 has not yet satisfied certain key obligations under the contract, it is not entitled to receive payment due upon completion of its construction obligations.”

In its lawsuit, LINK427 says an independent certifier was hired to determine if the extension has met the substantial completion threshold so the $144 million can be paid out.

The certifier “adopted the Government’s position, failed to undertake any independent analysis, and refused to certify Substantial Completion,” according to the lawsuit.

Consortium began work on extension in 2018

The project has two parts: an eight-lane, 6.6-kilometre extension from Highway 7 north to Major MacKenzie Drive; and the widening of the existing four-kilometre stretch of Highway 27 south of Highway 7 down to Finch Avenue.

While the province claims there are safety concerns along the widened portion as well, it has allowed it to open with restrictions, said McConachie via email.

“The Province has worked with LINK427 to facilitate the opening of that section by placing conditions such as reduced speed and additional salting in below-zero conditions that would allow that portion of the road to open.

“We hope LINK427 will take advantage of the decreased traffic volumes to complete this repair.”

That stretch was designed to handle a 100 km/h speed limit, but the province has reduced the maximum speed to 80 km/h.

Infrastructure Ontario declined to provide more details about its safety concerns, but the LINK427 lawsuit suggests they revolve primarily around what’s called a crossfall — the slope gradient on the road that makes it slightly higher in the middle, allowing water to drain off to the sides.

The lawsuit claims the province is complaining the crossfall isn’t an exact two per cent sloping grade.

LINK427’s lawsuit alleges it didn’t have to be, saying “the Parties had not contemplated, or agreed to such requirements at the time the Project Agreement was signed,” according to the court documents.

The consortium alleges the government is trying to force it “into new requirements without contractual obligation, justification and/or for an ulterior motive or otherwise improper purpose.”

Despite the ongoing legal issues, the province says it hopes the highway extension will open this summer.