Why this endangered species from B.C. is featured on a U.S. postal stamp 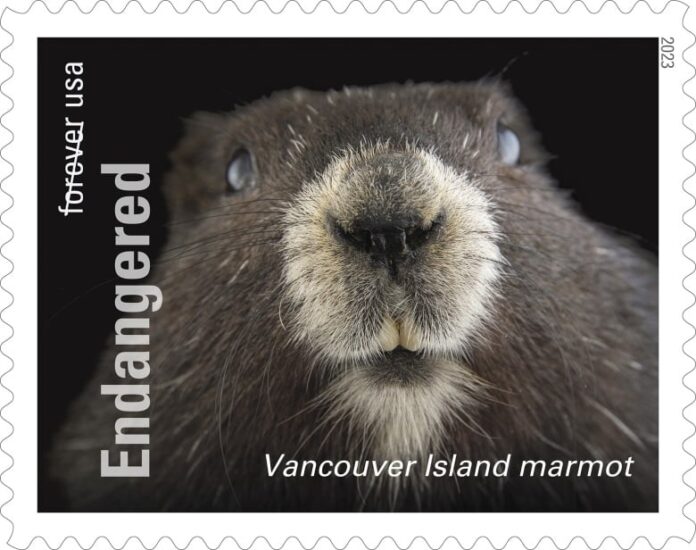 The endangered Vancouver Island marmot is having a moment.

The chubby little rodent was featured on the Netflix docuseries Island of the Sea Wolves earlier this year.

Now, it’s on a U.S. postal stamp — one of a new collection featuring 20 endangered species.

As its name would suggest, the marmot is found solely on Vancouver Island. It’s puzzling, perhaps, that a U.S. institution would include it in an American collection.

In a statement to CBC, the U.S. Postal Service (USPS) says the Canadian creature was included because it’s one of the “world’s most endangered animals.”

“Its plight points to several key aspects of endangerment: It is affected by climate change, an abundance of predators, and by forestry practices within its small, isolated range,” the USPS said.

“It has become a symbol for conservation, as the mascot of the Western Hockey League’s Victoria Royals, for example.”

According to the Marmot Recovery Foundation, predation by wolves, cougars and eagles accounted for 80 per cent of marmot mortality from 1995 to 2005, and some believe that landscape changes due to logging and climate change are affecting the relationship between marmots and their predators.

According to the province, there were fewer than 30 marmots in 2003. Thanks to conservation efforts, more than 200 were counted in 2021.

The image for the stamp was taken by National Geographic photographer Joel Sartore, who is on a mission to photograph every endangered species around the globe, should they become extinct.

He said the Vancouver Island marmot is a symbol of hope.

“If you set your mind to it, you can stop extinction and you can make the world a better place,” Sartore told On The Island host Gregor Craigie.

When he first heard the Vancouver Island marmot was being featured on a U.S. stamp, Adam Taylor, executive director of the Marmot Recovery Foundation, said he didn’t believe it.

“I just couldn’t understand why Vancouver Island marmot would be on a U.S. postal stamp,” he said.

But, he said, he was happy to see it getting some international attention — and “hope” really is the message when it comes to these small creatures and their recovery.

“I think the marmot story is an opportunity to provide a bit of hope that we can work to bring marmots back, and then that work that we’re doing applies to other species too,” he said.

“There are things that are achievable and doable and we can save these species.”

On The Island7:48Marmots on the Mail – we spoke with NatGeo photographer about the Vancouver Island Marmot stamp and the Photo Ark

Gregor Craigie spoke with Joel Sartore, a National Geographic photographer and founder of the Photo Ark, a 25-year effort to photograph every species in human care around the globe.