Why a woman blames Trump selfies for her divorce 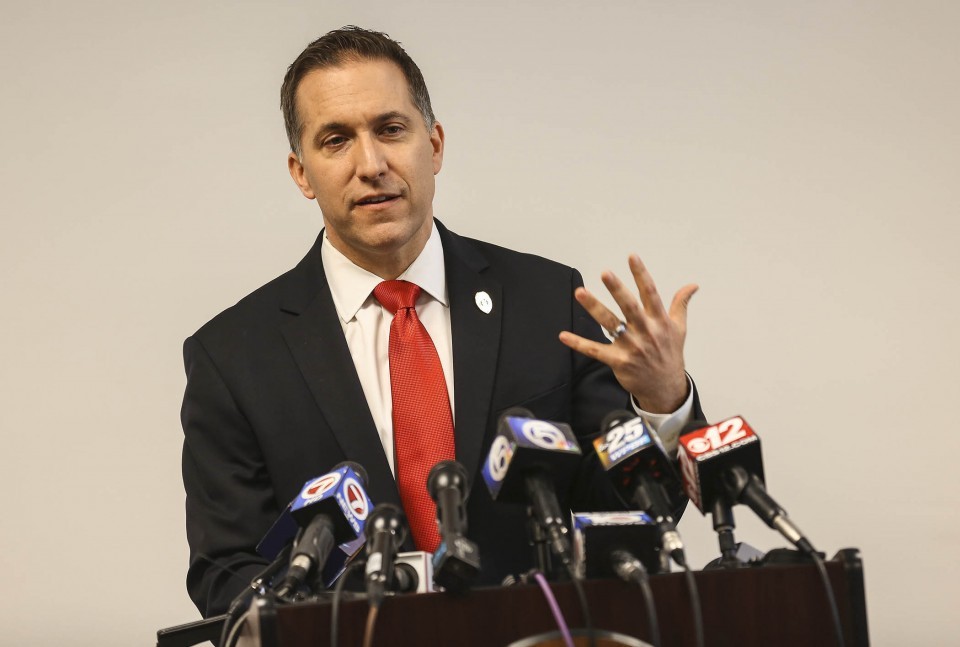 The news release begins with a statement as terse and vague as you would expect from a high-profile couple confirming their divorce, after reporters got wind of it.

Lynn and Dave Aronberg — a former Miami Dolphins cheerleader and the top prosecutor in Palm Beach County, Fla., respectively — have “decided to respectfully and amicably part ways and end our marriage,” they announced in a joint statement last week.

“We kindly ask for your support in preserving our privacy as we start to navigate this new chapter of our lives.”

So far, so standard.

And then, mystifyingly, the next seven paragraphs of the news release are spent obliterating privacy and expectations alike.

The release, which was issued by Lynn Aronberg’s PR representative, quotes almost verbatim from a gossip website about the “brand new BMW” and tens of thousands of dollars that she apparently extracted from her husband in a settlement.

It claims the state attorney’s reluctance to have children contributed to the breakup.

And it concludes with the line that would propel the couple’s divorce case from Palm Beach County gossip pages to international news:

“A staunch Republican and supporter of President Donald Trump, Lynn also said she felt increasingly isolated in the marriage.”

Or as the PR firm headlined it: “the Trump Divorce.” With the same anonymous sources and exclamation points it would use to chronicle the demise of their marriage, the website Gossip Extra broke news of the couple’s engagement minutes after it took place in late 2014:

They had met years earlier, Lynn Aronberg told The Washington Post, when he was a state senator in the 2000s. She described herself as a lifelong Republican and him as “a short Democrat” who nevertheless appealed to her.

They married on a beach in 2015. The gossip site covered that, too.

Though she put aside cheerleading years ago to build a career in publicity, Aronberg, 37, said her husband’s liberal supporters came to regard her as “the hayseed wife” — nearly 10 years his junior, with intolerable politics.

“It wasn’t an issue at first, but that was before the Hillary-Trump saga,” she said. “And as that built, the tension in our relationship built.”

Despite his affiliation in the Florida statehouse, Aronberg is not exactly a party-line Democrat.

He was elected to the state attorney’s office in 2012 with the help of Republican donors, according to the Palm Beach Post.

And the prosecutor has been spotted multiple times at Trump’s Mar-a-Lago Club, according to the newspaper — despite backing Hillary Clinton in the 2016 race; investigating assault accusations against Trump’s campaign manager that year; and recent reports that he may be considering a bid for U.S. Congress under the Democratic banner.

[At Mar-a-Lago, the star power of the presidency helps charities — and Trump — make more money]

While Lynn Aronberg has been a Trump fan since his days on “The Apprentice” — she owns a three-legged dog named Ivanka — she said her husband had known the mogul for years.

He raised political funds at Mar-a-Lago, she said, and took her to the resort nearly every weekend — even as Trump’s brand became increasingly toxic to her husband’s liberal base.

“I’m walking through the red carpet, and he’s sneaking through the bushes,” she said, recalling selfies she snapped with the future president and his wife, Melania Trump, while her husband would “run and hide from the photographers.”

“He’d ask me to not to take pictures. He wouldn’t want me to post them,” she said.

Her Facebook wall and photo galleries attest to that. Grinning with Melania Trump in multiple photos. Posing with the future president in a gold-trimmed ballroom on New Year’s Eve, three weeks before he moved into the White House.

“He’s really nice,” Lynn Aronberg said of Donald Trump. “He’s like: ‘Dave: How did you get her to marry you?’”

But staying married to him became a strain as the presidential race wore on, she told The Post. At the couple’s home in West Palm Beach, she said, her selfie habit drew irritated phone calls from her husband’s supporters.

“You know, the unions,” she said. “Or sometimes he wouldn’t even tell me who was calling him, to say not to post pictures of Trump or Melania.”

She would refuse the requests, she said.

Eventually she’d do so in public.

The leaks, and the end

“So what if I like Ivanka Trump or a conservative issue on social media?” Lynn Aronberg told Gossip Extra in February, the same month she filed for divorce. “So what if I invite Melania to be in my book group?”

“Dave Aronberg’s Divorce Getting Downright Ugly!” the website reported in June, quoting an unnamed friend of the family.

And then last week, “a source familiar with the negotiations” gave Gossip Extra details of a settlement that Aronberg reportedly signed with her husband: “$100,000 worth of goodies in exchange for her signature on the dotted line.”

“They have no children, which was a problem for Lynn,” it reported. And then all the stuff about Trump.

These article were no more popular with her husband’s supporters than her selfies, Lynn Aronberg told The Post: “They’d get mad and try to say I’m leaking it.”

She denied doing so. She also declined to discuss her divorce settlement with The Post — and said she didn’t know how the same details that Gossip Extra reported ended up in a news release on Thursday, released by her PR representative, beneath the couple’s brief statement confirming “the end of our marriage.”

Not that Lynn Aronberg minded the leaks, exactly.

[Why I’m grateful every time President Trump insults a woman]

“I trust them,” she said of the PR firm, TransMedia. “I don’t care if they’re repeating something Gossip Extra already said.”

Lynn Aronberg runs a separate PR company under her own name but said she used to work for TransMedia, which currently lists her as an executive vice president, though she denied being an employee.

“She’s what we call a partner in our firm,” said Thomas Madden, TransMedia’s chief executive.

He said the company had gathered the Aronberg’s settlement details — along information about Trump’s role in the divorce — from “other sources.”

“There’s nothing inaccurate,” he said. “She did not violate any privacy agreements.”

Dave Aronberg, who has been approached about running for U.S. Congress, couldn’t be reached for comment.

A spokesman for the prosecutor, Christian Ulvert, confirmed that Aronberg had reached a settlement in his divorce but declined to discuss it or the private details that appeared in his wife’s news release.

“My client’s ready to just close this chapter,” Ulvert said.

As for Lynn Aronberg, she told The Post that she remains friends with her soon-to-be-ex husband — though he’s not thrilled about the leaks, wherever they’re coming from.

She has dinner plans with Donald Trump Jr. coming up, she said.

From old photo to right-wing meme to Trump’s twitter: The journey of one Schumer/Putin pic