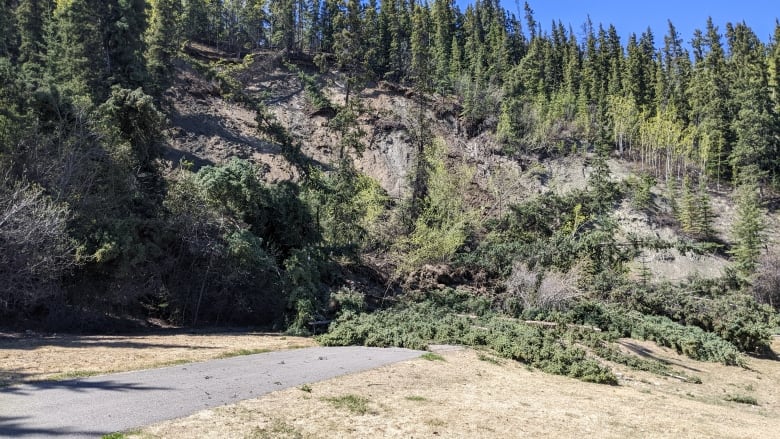 The City of Whitehorse recommended that residents of a downtown house leave their home after two more landslides took place over the weekend.

“We have had conversations with them and they have been careful in staying in the residence,” said Mayor Laura Cabott Monday on CBC’s Yukon Morning.

One of the two landslides occurred above Cliffside Park, near Jeckell Street, in the city’s downtown. The park has been cordoned off since May 2021, when a previous landslide occurred.

Saturday’s landslide saw debris fall from the escarpment, which runs all along the west side of downtown, into the park, spilling over onto 6th Avenue, near a house.

WATCH | Footage from the Yukon Geological Survey shows a landslide sending debris into Cliffside Park and onto 6th Avenue:

The situation comes after the city started cleaning up a massive landslide that occurred late last month.

That landslide was the result of about 3,000 to 4,000 cubic metres of sand, silt and clay that fell from the escarpment across Robert Service Way and the Millennium Trail, and into the Yukon River.

The city said the current sliding is not caused by the recent construction of a sheet piling wall along Robert Service Way. The wall is being built to mitigate the damage from any future landslide in the area and allow officials to reopen the main thoroughfare into downtown, which has been closed for weeks.

Cabott said there are three houses “very close” to the latest slide area and potentially at risk. She said the city has spoken to the owners, and two of the three homes are vacant.

Another landslide took place either late Friday night or early Saturday morning near Wood and Jarvis streets. Cabott said the city cordoned off more areas near the escarpment as a result of the weekend’s slides.

No risk to public or properties, says city

Despite the new landslides, which Cabott described as “fairly significant in size,” she said there is no risk to the public and private properties “at this time,” as long as people don’t go into the areas the city has cordoned off.

“People are safe in their homes, but should be taking precautions and should be acutely aware of the escarpment,” said Cabott.

She said the city’s engineers and consultants continue to monitor the entire escarpment every day and expect to see more slides over the next week or two as groundwater continues to seep out of the escarpment.

The city provided emergency preparedness information to residents in about 40 or 50 homes after this weekend’s landslides, just in case residents get caught in their homes and can’t leave for a while.

The information packages include advice on having enough supplies to last 72 hours as well as signs that residents can put in their windows that read either HELP or OK.

The city will be providing an update at a news conference at city hall today at 2 p.m.