White House unveils ‘Made in America’ week, though many Trump products are made overseas 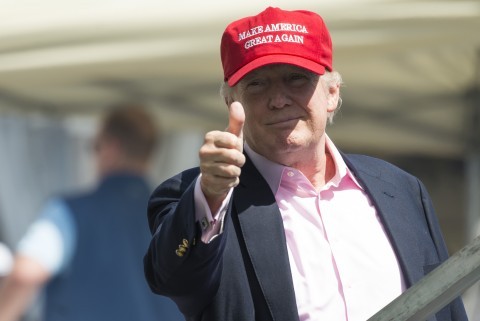 PISCATAWAY TOWNSHIP, N.J. — President Trump, whose company outsources the manufacturing of many of its products to overseas factories, is unveiling “Made in America” week at the White House to promote products made in the United States.

In keeping with the “America First” theme of Trump’s inauguration, the administration will highlight U.S. manufacturing in the coming week, the latest of its theme weeks orchestrated by aides to bring discipline to the White House and focus Trump’s schedule and message on a set of policies.

The week will begin Monday with a “Made in America product showcase” featuring crafts and other items created in each of the 50 states. The president plans to issue a declaration Wednesday and deliver remarks on the importance of making things in the United States. And Saturday, Trump will travel to Norfolk to attend the commissioning of the USS Gerald R. Ford, the first in the Navy’s new class of nuclear-powered aircraft carriers.

“This week the Trump administration will honor the amazing American workers and companies who have products that are made in America,” Helen Aguirre Ferré, the White House’s director of media affairs, told reporters at a briefing here Sunday. She said the United States sets “the world standard for quality and craftsmanship.”

For Trump, highlighting U.S.-made products is inconsistent with his practices as a businessman. For years, the Trump Organization has outsourced much of its product manufacturing, relying on a global network of factories in a dozen countries — including Bangladesh, China and Mexico — to make its clothing, home decor pieces and other items.

Similarly, the clothing line of Ivanka Trump, the president’s older daughter and a senior White House adviser, relies exclusively on foreign factories employing low-wage workers in countries such as Bangladesh, Indonesia and China, according to a recent Washington Post investigation.

Asked at Sunday’s briefing whether “Made in America” week would include a commitment from the Trump Organization or Ivanka Trump’s company to make more of their products in the United States, Ferré told reporters, “We’ll get back to you on that.”

The White House hopes “Made in America” week can draw attention to actions the administration has taken that officials believe help U.S. manufacturing or promote the interests of U.S. workers, such as withdrawing the United States from the Trans-Pacific Partnership, moving to renegotiate the North American Free Trade Agreement or removing environmental regulations and other rules.

“Made in America” week comes as the Trump administration nears decisions on a number of trade matters, including investigations by the Commerce Department on steel and aluminum. Asked whether the administration is considering import tariffs on products manufactured in other countries, a senior administration official briefing reporters here Sunday said, “At this stage, everything is on the table.”

Trump’s advisers also hope that by highlighting U.S. manufacturing they can underscore the need to overhaul the nation’s tax code, including substantially reducing the corporate tax rate. Treasury Secretary Steven Mnuchin and National Economic Council Director Gary Cohn have been working with key lawmakers to develop tax overhaul legislation, which they hope will advance on Capitol Hill in coming weeks.

The White House will continue with its theme weeks into August. July 24 will kick off “American Heroes” week, and July 31 will be the start of “American Dream” week, Ferré said, though she would not specify what policies would be spotlighted either week.