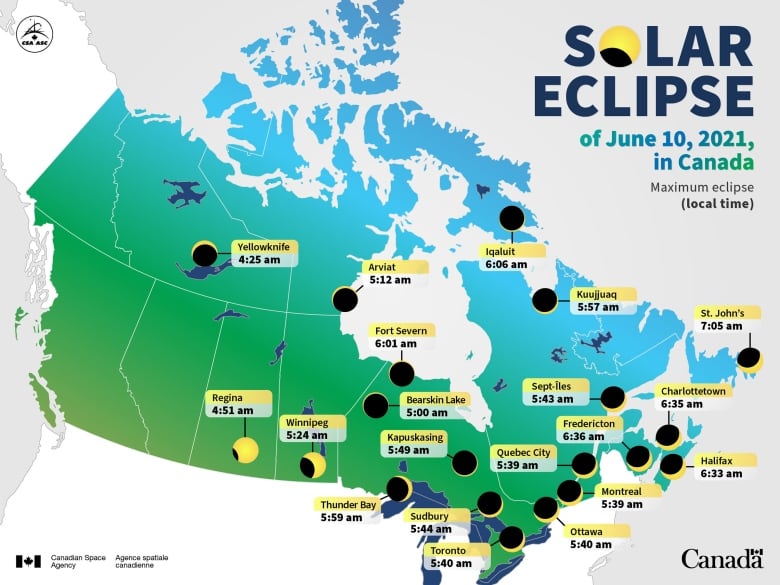 Just two weeks after the total lunar eclipse, there’s another celestial event on the horizon — but this time involving the sun.

On Thursday, parts of the Northern Hemisphere — including Canada — will experience an annular solar eclipse, an event where most of the sun is blocked out by the moon.

There are three main types of solar eclipses: total, partial and annular. During a total eclipse, the entire disk of the sun is covered by the moon. A partial eclipse is where the moon appears to swing through some of the sun.

An annular eclipse, however, is when the moon is a little farther away from us in its orbit and covers all but the outer edge of the sun, creating what some call a “ring of fire.”

The reason we get these types of eclipses is due to an odd coincidence of nature: The sun is 400 times larger than the moon — but the moon is also 400 times closer to us. Every so often, the moon is able to completely cover the face of the sun. And once in a while, it just barely does so when it is at apogee, or the farthest from Earth in its monthly orbit.

While solar eclipses are beautiful to see, it’s important that you never look directly at the sun during these events — even if only part of it is covered, as it can cause severe eye damage.

Instead, ensure you have adequate eye protection, such as solar eclipse glasses, which you may have picked up during the 2017 eclipse. Check them for scratches or holes, and if you find any, throw them away. You risk damaging your eyes with even the slightest flaws.

WATCH | How to safely watch a solar eclipse

A solar eclipse can seriously damage your eyes. Using eclipse glasses is just one safety tip for viewing the total eclipse. 4:36

If you don’t have eclipse glasses, you can make a pinhole projector. Poke a hole in paper or a card and hold it extended in your arms with your back to the sun, projecting it at either the ground or toward another card set up about a metre away.

Just like the recent lunar eclipse on May 26, if you want to see this eclipse, you’re going to need to wake up pretty early.

The annular part of the eclipse will be visible in northern Ontario at sunrise, up through Hudson Bay and into northern Quebec and the Arctic.

If you’re not in those regions, however, you will still be able to see a partial eclipse at sunrise. The best place to experience the event will be somewhere with a clear view of the horizon as the sun rises.

Here are the times of the eclipse for some major Canadian cities, beginning with sunrise (all are approximate local times):

If your region happens to have clouds, you can also watch the eclipse online through The Virtual Telescope Project. And if you’re hoping to take some photographs, learn how to do so safely using this guide from Sky & Telescope.