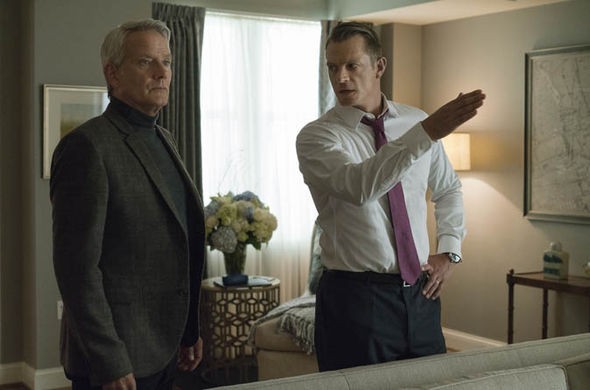 “Nothing.” That’s what Neve Campbell was allowed to tell E! News about the new season of House of Cards.

“We can say that last year left us off with the Underwoods in a lot of trouble. Walls are closing in on them and this season more of that occurs basically,” she said with a laugh. “More chaos. Chaos ensues.”

“Like every season of House of Cards, the moral compass is spinning and madness is going to ensure at some point,” Michael Kelly told us.

Campbell plays LeeAnn Harvey, a political consultant pulled into the world by Claire Underwood (Robin Wright), who eventually became the Underwood campaign manager. She engaged in some light hacking to help sway the results of the election in favor of her bosses. You know, the norm in the world of House of Cards. Kelly returns once again as the loyal Doug Stamper, the White House Chief of Staff to Frank Underwood (Kevin Spacey).

“At least once a season I read something and I’m just like, ‘Oh my god, dude. Really? This is crazy.’ But that being said it’s really fun to play it,” he said.

What is it about the Underwoods that makes people do anything—really, anything, including murder—for them?

“I think power can be very alluring to some, and to these two personalities—LeeAnn and Stamper—it certainly is,” Campbell said.

House of Cards is a political drama, but for many it hits close to home, especially its stars. They were filming during the 2016 presidential election. “It was all encompassing,” Campbell said. “CNN plays in the hair and makeup trailer all day, every day. We were watching an election while we were shooting an election, so it was pretty overwhelming; but it certainly gets you in the mood. Gets you fired up that’s for sure!”

“It was a rough day, the day after the election, on set,” Kelly said.

“Everyone was very invested, so many of us are political and do stuff like that, so, yeah, tough day,” Kelly said.

Click play to hear more from Campbell and Kelly.

House of Cards season 5 is now streaming on Netflix.