What If You’re Not in Love with Your Boyfriend? 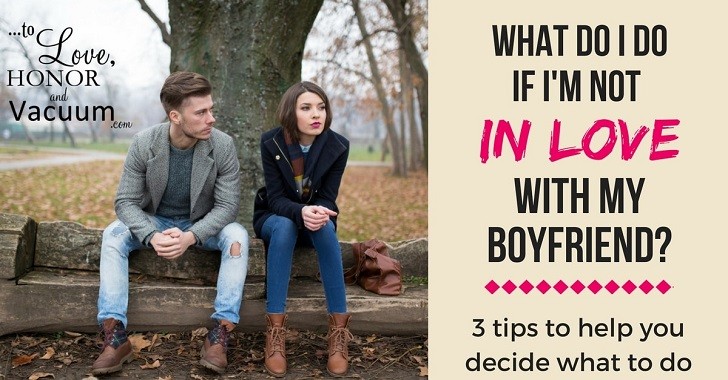 What do you do if you’re not in love with your boyfriend–but you really want to be?

Connor and I met in September, were dating in January, and were engaged exactly 11 months and 20 days later. Six months later, on July 18 2015, we were married. We had a whirlwind romance, and it was perfect. (I’m hoping by now you’ve realized it’s Rebecca writing today, not Sheila.)

But I’ve also recently had a friend get married who dated for 7 years, and they were happy to take it slow. I know another woman who, when he first asked her out, told the man she would eventually marry that she wasn’t attracted to him (that changed, FYI). But when do you know that you need more time, and when do you know that it’s time to call it quits?

We got this reader question the other week, and I’m going to try to answer it today:

I’m in a bit of a situation. I’ve been seeing this guy for a few weeks, and we get along tremendously well. We’re both Christian, in our 20s, we share the same values, have lots of fun and are seriously attracted to each other. He is intelligent, kind, and is not afraid to challenge me or be challenged by me. In short, he’s amazing and we click. But here’s the problem: I’m not in love. Last time we met, he said he was ready for a relationship, and I told him I wasn’t ready yet. (I had told him the same morning I wasn’t ready, and he had said that neither was he. He must have changed his mind during the day.)

We live several hours apart, so meeting each other requires planning, money and sacrifice of other social activities. So we can’t hang out casually forever, waiting for me to make up my mind. We’ve talked about relationships and we both take them seriously. For me, it’s completely off the table to get into a relationship with someone only hoping that I eventually will fall in love with them. My last boyfriend did exactly that to me, and it ended in heartbreak. I would never want to hurt this guy like that.

Having a connection like this with someone is rare for me, and I care very much about this guy. The thought of having to hurt him and to never see him again is really painful. But what can I do? I can’t force any feelings, no matter how much I try. And I would rather miss out on a great future with him than lead him on and break his heart later. I pray about this continuously, and I know I need to trust God’s plan for both our lives. I just don’t want to sabotage this by being too afraid, or overthinking it. Does anyone have any advice for this girl who really needs to study but is crying over a guy instead?

Often we confuse “love” with what we first felt in grade school about that cute guy who smiled at us. Love is supposed to be butterflies, and giggling, and late-night phone chats with your friend about every last thing he said that time you hung out…right?

But it isn’t always like that in real life. Sometimes the butterflies come after you’ve fallen–not before. I know a lot of now-married couples who started dating where the guy was much more love-struck than the girl, and in a few months’ time the girl really fell hard, too.

Now, I do think that the “spark” is an important part of a relationship–but for many of my friends, it came a few months into the relationship. Just because you don’t feel it yet doesn’t mean you won’t feel it ever.

In this situation, the reader said she’s only been dating him for a few weeks. If you really have that great of a connection with the guy, think he’s amazing, and really want to fall for him, honestly I’d give it more time.

2. Ask yourself why you aren’t in love with him

In high school I was “talking” to a guy (we’ll call him Nathan) that I really admired. He was hard-working, sweet, cute, kind, seriously in love with God, and pretty much the nicest guy you could ever imagine.

I tried to fall in love with him for a year straight. It just never happened.

And I knew the reason. Nathan wasn’t someone who “got” the part of me that likes to write books, talk about politics, explore the abstract and debate theology. He wanted a simpler, small-town-type life that I was never going to be able to give him, and I needed someone to go on adventures with.

We stopped seeing each other and three years later we were both married to people absolutely perfect for us.

If there is a real issue in your relationship that is the reason you’re not in love, ask yourself, “is this the kind of thing that we can work on, or is this a personality mismatch that will never be resolved?” If it’s the latter, I believe that it’s better to be honest and end it, rather than continuing. But if there isn’t, it may be good to wait a bit longer, like I said in the first point.

3.  Give yourself permission to not have it all together yet

It sounds like this girl has gone through a really hard break-up. A lot of times, when we’ve been hurt, it can be scary or difficult to let ourselves feel emotionally vulnerable with another person again.

In her fear to not do to this guy what happened to her, she’s worrying about the relationship when they’ve only been together for a few weeks! It’s a really sweet thing to consider, but I believe the reader is expecting a bit too much of herself.

In relationships, things are messy. You don’t always know what the right thing to do next is, and it can be stressful when people’s hearts are on the line. But sometimes when there are issues like this in a relationship the best thing to do is to take a step back, breathe, and lower the stakes a bit.

Dating has begun to come with a lot of pressure, especially in the social media age. You have to be “in love,” you have to post instagram pictures that are “#relationshipgoals,” and you have to be able to see yourself together forever. But it’s OK if you’re not there yet. It’s alright if you’re seeing someone and you don’t have a “perfect” relationship. Cut yourself some slack, and give yourself time to figure out what you’re feeling. It’ll either become clear, and you’ll fall in love with him, or it’ll continue to remain unclear and it’ll be time to end the relationship.

I don’t envy this girl her position–but I want to know, what’s your advice? What would you do in this situation? Let me know in the comments below!