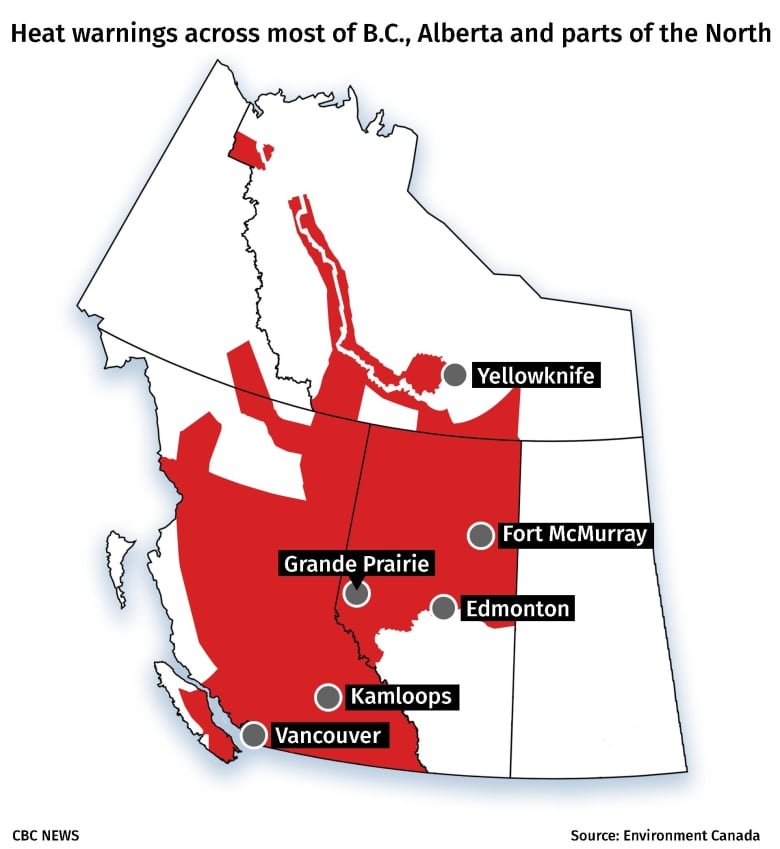 A heat wave stretching across Western Canada, from B.C. into southern Saskatchewan and up through the Yukon and the Northwest Territories, is set to break daily and all-time temperature records much earlier in the year than usual.

High pressure is trapped under a “heat dome,” unable to be pushed through the country by wind, creating long-lasting high temperatures wherever the pressure sits, according to Armel Castellan, warning preparedness meteorologist with Environment Canada.

“Temperatures are then going to build on the previous day,” he said.

“So you wake up in the morning and it’s warmer than the day before.”

Castellan said maximum temperatures in B.C. are expected Sunday and Monday, and Alberta will see its highest heat early next week.

Temperatures could approach 40 C in some parts of B.C. this weekend and through next week, and in Alberta early next week.

In Kamloops, B.C., the temperature is forecast to hover around 40 or 41 C for six consecutive days.

“Nobody’s ever seen this because it’s never happened, not in record keeping,” Castellan said.

Little to no reprieve is expected overnight, he said, as overnight lows will remain between 15 and 20 degrees C.

It’s the overnight temperatures that are the problem, Castellan said. They aren’t going to dip low enough for our bodies to recover from the long, hot days.

“Even if we’re in the shade, if we’re dealing with temperatures well up into the 30s, in fact, even into the 40s for parts of southern B.C. and eventually into Alberta as well, those values are so extreme that our bodies need to recover,” Castellan said.

This is where it becomes critical to watch for heat related illness, including heat exhaustion and heat stroke. Symptoms of heat related illness include, but are not limited to, heavy sweating, weakness, dizziness, nausea, headache and muscle cramps.

The increased heat comes with an increased risk of other climate emergencies, including forest fires, as trees and grasses dry out, creating more fuel.

Castellan said there is a zero per cent chance of lightning strikes in B.C. until Sunday afternoon, so if any fires start, they will likely be human caused.

All this, Castellan said, is the result of climate change.

“What’s important here is not so much the [temperature] itself today because, of course, the forecast isn’t going to be perfect and it will maybe hit a couple degrees below or a couple of degrees above.”

“What’s important is to realize that this is part of what climate change is bringing us: more frequent, higher amplitude and longer lasting heat events.”

Simon Donner, interdisciplinary climate scientist and geography professor at the University of British Columbia, said this heat wave is exactly what scientists have been warning will become more common because of human activity, in particular, if we don’t reduce greenhouse gas emissions.

“As the climate warms, it basically means it’s shifting the distribution of the weather,” he said.

“So we’re going to have more events like this and fewer cool summers.”

As temperatures remain high at night over the coming days, sleeping will become a challenge for many without air conditioning in their homes. People, infrastructure and ecosystems will all struggle to manage during the extreme weather.

Donner said this is the essence of climate change.

“Climate change isn’t inherently a bad thing,” he said. “The problem is the climate is changing faster than we can adapt.”