We’re not deaf to your grievances, Osinbajo tells agitators 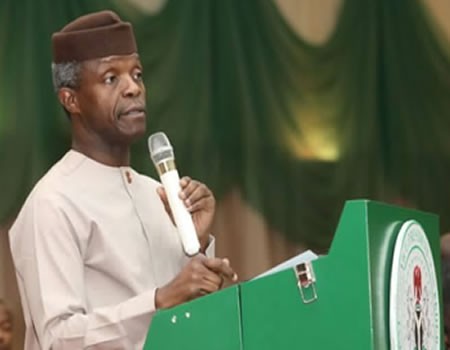 The Acting President, Yemi Osinbajo, on Tuesday again assured Nigerians that the present administration is not deaf to grievances in parts of the country.

While urging that such grievances should be expressed with grace, he said the Federal Government would address all of them.

The assurance was contained in a statement made available to journalists by the Senior Special Assistant to the Acting President on Media and Publicity, Mr. Laolu Akande.

Akande, while summing up the series of consultations Osinbajo had with critical stakeholders on the agitators in parts of the country, said the Acting President assured his guests that the government would address their grievances.

He said while the consultations were concluded last week, the Presidency would continue to actively engage with different segments of the Nigerian population at different stages and format in the near future.

He explained that the consultations were meant to provide a platform for frank and open discussions between the concerned stakeholders and by extension the Nigerian public on issues relating to the unity, peace and security of country.

He disclosed that the meetings touched on various issues relating to the ethnic agitations that have manifested most recently in a call for secession by some groups of youth from the South East and an ultimatum by Northern youths for South Easterners living in the North to leave the region by October 1.