‘We Will Not Give In To Fear’: A Day After Shooting, Congress Plays Ball 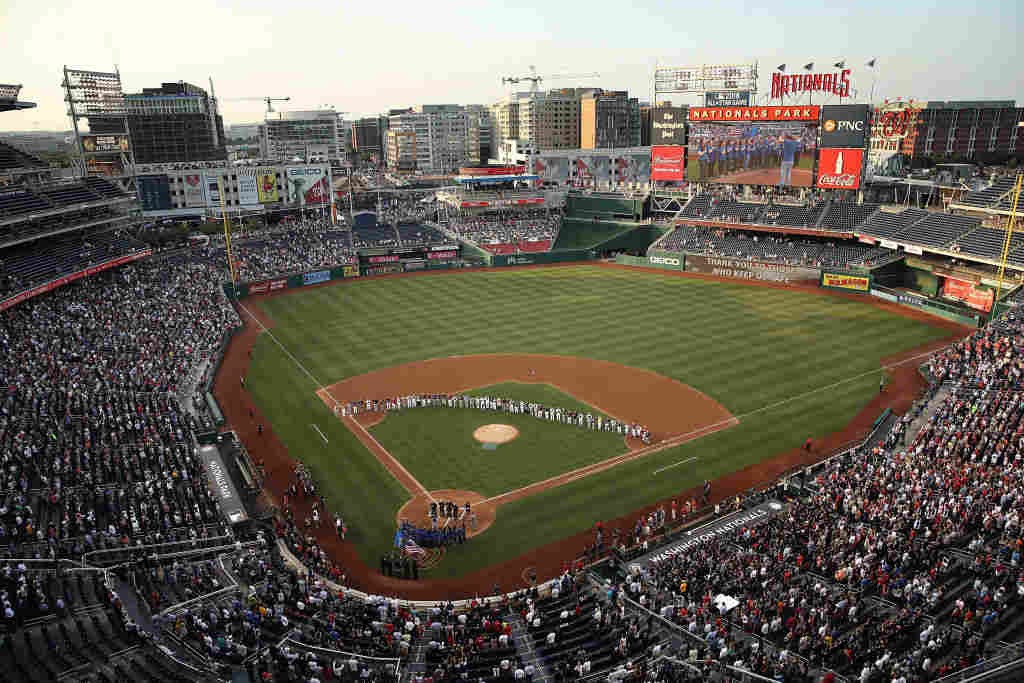 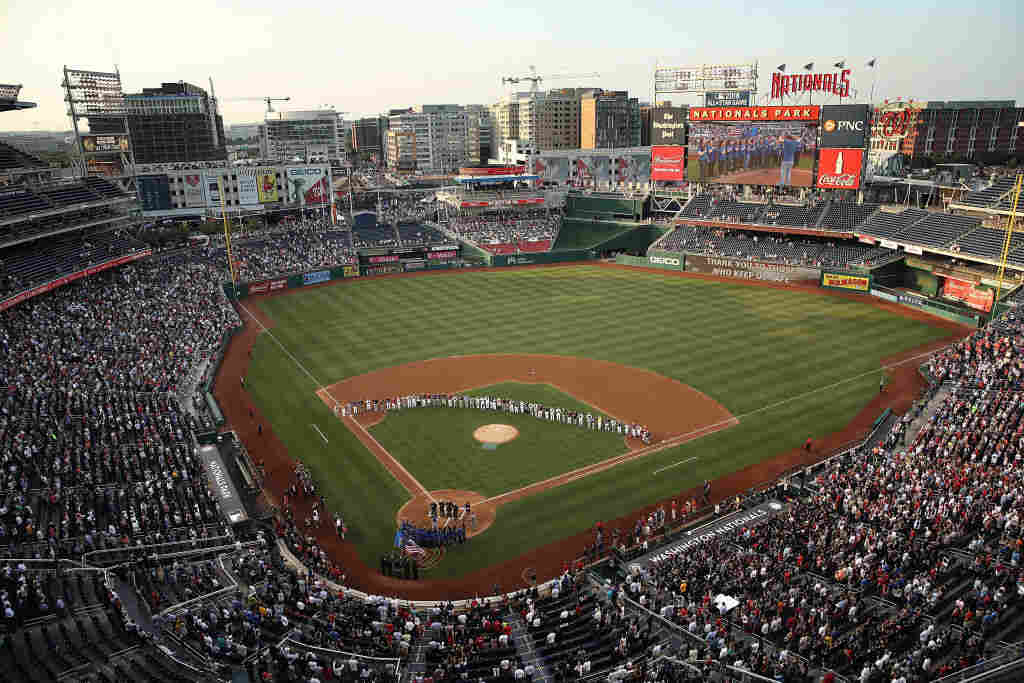 Members of the Republican and Democratic congressional baseball teams gather for a moment of silence before the Congressional Baseball Game on Thursday. Win McNamee/Getty Images hide caption

Members of the Republican and Democratic congressional baseball teams gather for a moment of silence before the Congressional Baseball Game on Thursday.

The sun danced and dipped through a bright blue sky over Nationals Park Thursday night, leaving a warm still evening in its wake.

“What a beautiful day for baseball,” blared a voice over the loudspeakers, after Bruce Springsteen’s “Glory Days” faded out, and John Fogerty’s “Centerfield” finished, too.

Even so, a poignant and immovable shadow cast itself over Thursday’s annual congressional baseball game.

Rep. Steve Scalise of Louisiana, the third-highest-ranking Republican in the House of Representatives, is still in critical condition after undergoing his second surgery as a result of a gunshot wound to his hip.

He was one of four wounded by a gunman Wednesday in an attack on a Republican team practice in Virginia. A hospital statement said Scalise was doing better over the previous 24 hours but would “be in the hospital for some time.”

The FBI says the shooter, 66-year-old James Hodgkinson, was killed by police.

Members of both teams gathered at second base to pray before the game, and both sides wore Louisiana State University baseball caps, Scalise’s alma mater. After winning the game 11-2, the Democrats gave their trophy to Republican manager Rep. Joe Barton, R-Texas, to give to Scalise.

Aguilar played outfield for the Democratic team and hit a key single that pushed the Democrats’ lead to 7-2 in the bottom of the third inning.

“We will not give in to fear, violence or hate,” Aguilar said. “We will play for those affected by these despicable and cowardly actions, to support local charities … and to remind the American people that this violence will not define or divide us.”

Before the shooting, Scalise was slated to play second base on Thursday night for the Republicans.

More than 24,900 people attended the game in Southeast Washington. That was the most ever in the history of the game, which was first played in 1909, and then began as an annual tradition in 1962. With their victory, Democrats took the lead in games won, 40-39-1.

Attendees, both politicians and constituents, spoke about how important the game was as a bipartisan beacon.

“Right now the country is more divided in their political ideology than any other demographic or characteristic, and yesterday it showed,” said Holly Spease, a Republican spectator from Tennessee, who wore a T-shirt with an elephant on it.

“I think these events humanize the other side, whatever the other side means to you,” she said. “We tend to live in echo chambers, so maybe when there’s a more personal foundation in Washington it could ease political tension.”

Rep. Dwight Evans, a Democrat, and Rep. Brian Fitzpatrick, a Republican, represent districts in Pennsylvania. They sat next to each other at the game above the first-base dugout, as a show of friendship across the aisle.

“We need to send a message to change the tone,” said Evans. “It starts here, it starts with each other.”

There was also a massive security presence at the game; police in body armor could be seen strolling the outfield promenade with weapons. President Trump did not attend the game, due to security concerns according to the White House, but he did record a video message that was played before the game.

“By playing tonight, you are showing the world that we will not be intimidated by threats, acts of violence or assaults on our democracy,” he said. “The game will go on.”

When asked whether he feels like the safety of members of Congress is more in jeopardy than it was five or 10 years ago, Hoyer ultimately agreed.

“I think the answer to that question is yes,” he said. “But there’s always been a level of violence. What’s not always been present is the 24-hour slow-motion repeat of that violence over and over and over and over again. When you have people watching that who are deranged… We need to be very careful, to the extent we can, to guard our own rhetoric so it’s respectful of one another.”

He said he was encouraged by the public outpouring of support, but ultimately wasn’t sure if anything about the polarization between the two parties was going to change in the short-term as a result of the shooting.

“I don’t want to be cynical, but in my experience there is a short time – it may be a month, two months, three months,” he said. “But then you go to a town meeting, or you see Rush Limbaugh and you get your juices going again.

“And you forget, that this resulted in something that was not right in a democracy.”