We want to be in Europe after Christmas – Rodgers 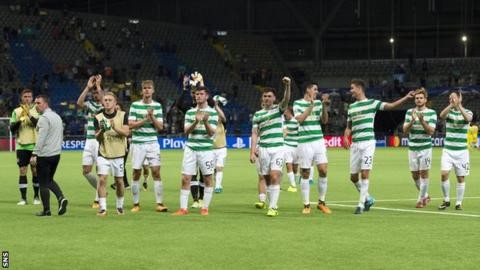 Celtic boss Brendan Rodgers wants his team to still be in European football in the new year after they reached the Champions League group stage.

Rodgers’ men lost 4-3 to Astana in Kazakhstan but won the play-off tie 8-4 overall.

“It’s a wonderful achievement to gain our qualification,” said Rodgers. “It’s a night to celebrate.

“I think what we would like to do is try to progress this year and be in European football after Christmas.”

The Scottish champions will discover their group opponents on Thursday at 17:00 BST. They will be in pot four, the bottom set of seeds.

The top two in each group qualify for the Champions League second round, with third place entering the Europa League knockout rounds.

“We’ve come through this qualification phase really, really well,” said Rodgers, whose side beat Linfield and Rosenborg to reach the play-off stage.

“I’m very, very happy and pleased to come through the six games, especially against a team like Astana – a very good side.

“We’re coming into the highest club level – the Champions League – we’re going to play against some fantastic players, the players are going to improve, get better, get better experiences. If we can be in European football after Christmas then that’ll be another great step forward for us.

“We’ll look forward to the draw. It’s brilliant for the club. I think it’s absolutely brilliant for Glasgow, the city because it’s not just about the football, it’s about the nation – what it does economically, commercially, what it brings into the city of Glasgow, Champions League football, businesses and everything.”

‘We can defend much better’

In Astana, Celtic fell behind to a Kristoffer Ajer own goal but Scott Sinclair’s strike restored the visitors’ five-goal aggregate advantage and the added bonus of an away goal.

However, three goals in 21 second-half minutes – one from Serikzhan Muzhikov and two from Patrick Twumasi – put Celtic in a far more precarious position.

Olivier Ntcham and Leigh Griffiths netted late away goals to ease those anxieties.

“You have to give credit to Astana,” Rodgers said. “They threw everything at it, they changed their shape. They put risk into the game and all of a sudden, we find ourselves on the ropes a little bit. When momentum changes like that in football, sometimes it can be very tough to turn it back round.

“That’s where you’ve got to give the credit to the players. At 4-1, you can be blurred in that moment. From [Ntcham’s goal], we really settled into the game.

“I felt that, naturally, we can defend much better than that.

“It’s another good learning game for us. We would want to be better than that.”